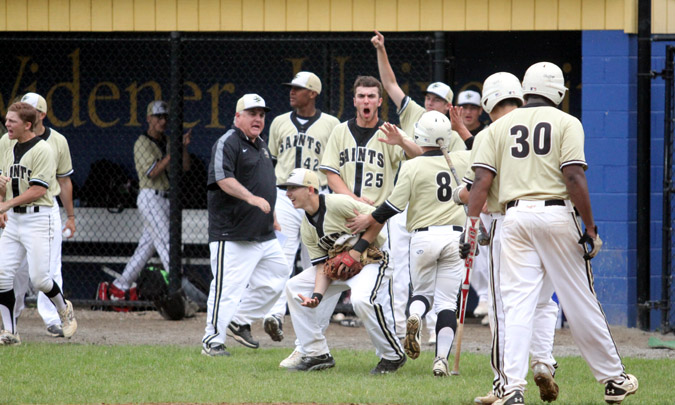 Neumann-Goretti celebrates early in the Catholic League title game as they piled up 11 runs to beat Roman Catholic for the championship May 23 at La Salle High School. (Sarah Webb)

This was the second year that the Catholic League used a double-elimination system. For that, Neumann-Goretti High School’s baseball team is most appreciative.

After being shocked by Cardinal O’Hara in the second game of the post-season, N-G had its season hanging by a thread for five straight games.

Five games later, the Saints completely turned around the grip by manhandling their opponents.

“This feels great,” said senior star first baseman Josh Ockimey. “It doesn’t get any better than this.”

Ockimey was referring to his team’s 11-0, Catholic League championship win over Roman Catholic on May 23 at La Salle High School.

Actually, Neumann-Goretti needed to defeat Roman twice because, thanks to three straight wins, the Cahillites were the survivors of the winner’s bracket. That explains why Roman Catholic’s players, who were attempting to become the first-ever sub-.500 team to win a Catholic League title (they finished 7-8 in Catholic League play) in any sport, appeared so despondent after losing twice in three days, and in rather ugly fashion.

Both victories were achieved via the 10-run rule, meaning they only lasted five innings. The first game was an 11-1 shellacking, and this contest was even worse.

“It really didn’t matter how much we won by, just as long as we won,” Ockimey said. “We were on a roll after losing (to O’Hara) and would have been tough to beat no matter who we played. I think Roman got us at the worst time.”

With the score tied in the bottom of the third, Neumann-Goretti found its swagger. They tallied four runs in the third inning and added seven more in the fourth.

One out later, senior pitcher Charlie Jerla ripped a two-run double that, thanks to an error, resulted in an additional run. Ockimey’s sacrifice fly made it 4-0.

Then came the fourth inning, and that’s when the Catholic League season basically drew to a close.

A combination of singles by Verratti, junior designated hitter Pat Doudican, an error, and wild hurling (three hit batsmen, a walk, a passed ball, and a wild pitch) increased the advantage to 11-0 and took the pressure off Jerla.

“That many runs lets you just throw strikes and trust your fielders,” Jerla said. “I just wanted to get the game over with as fast as possible.”

En route to finishing the post-season without allowing any runs in 16 innings, Jerla struck out eight and allowed only six base runners.

When Neumann-Goretti clinched the win, it gave the Saints their third title in four years and fourth in the past six.

“There isn’t a better way to go out than winning the Catholic League championship,” Ockimey said.

Even better than a possible state championship that still may happen later this season?

“Yes,” he said. “It doesn’t mean anything unless you win the Catholic League. That’s number one.”

NEXT: In NBA wager, archbishops pledge donations to local charities