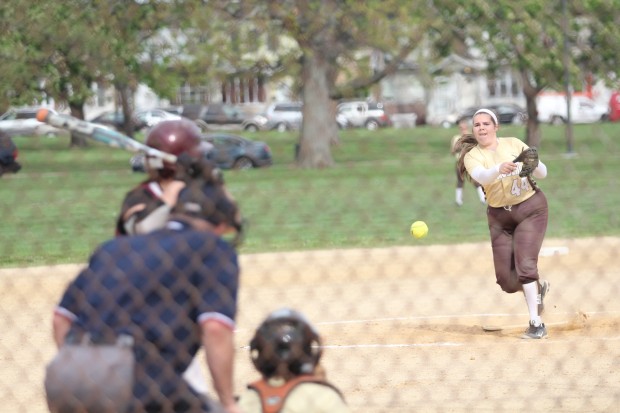 Kaitlyn Jaworski, a freshman pitcher for St. Hubert's, fires a pitch in the Bambies' May 5 game against Catholic League rival Little Flower. (Photo by Sarah Webb)

Talk about a player making the difference in an outcome.

In a Catholic League softball tilt on May 5 at Little Flower High School, St. Hubert’s trailed the Sentinels, 2-0, entering the third inning. From that point on, Hubert’s bats awakened to the tune of 11 hits.

Along the way, Bambies junior shortstop Jazmin Ortiz was unstoppable. By the time the slugfest finally ended, Ortiz, a third-team All-Catholic last year, had belted two doubles and one triple and knocked in three runs to lead Hubert’s to an 8-5 victory. 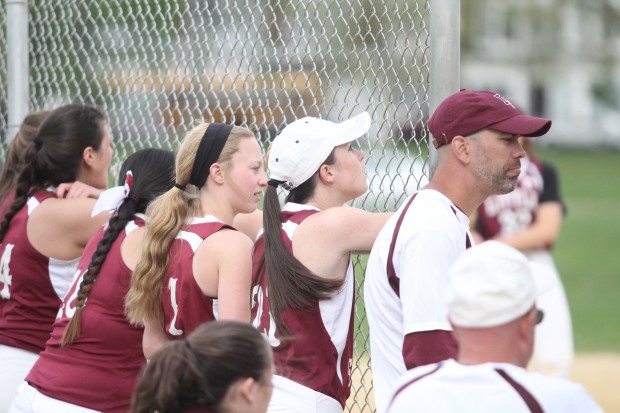 The Little Flower softball team watches their game against St. Hubert’s from behind the batting cage. (Sarah Webb)

However, in the Catholic League playoff quarterfinals May 15, both teams emerged on the wrong side of the ledger.

At Archbishop Ryan, junior Kerri Dadalski surrendered a miserly one hit and one walk, and the Ragdolls defeated Little Flower, 5-1. The Ryan offense received a major jolt when sophomore Sarah Ostaszewski smashed a three-run home run in the fourth.

Conwell-Egan scored runs in each of the first four innings, including three in the third and five in the fourth, and coasted to a 10-2 victory over defending champion Bonner-Prendergast. Sophomore Alexis Gartner hurled a complete game while the Eagles’ well-balanced offense offered five doubles.

Roman Catholic may or may not ultimately win the Catholic League baseball championship. But if the Cahillites don’t, they deserve some sort of a special prize.

Thought to be a, well, afterthought entering the post-season, Roman Catholic entered each of its three playoff games as a lower seed. Three games later, the Cahillites are one victory away from clinching the league crown.

Because this is the second straight year that CL baseball will be determined by a double-elimination tournament, and since they seized the winners’ bracket, the Cahillites will get two chances to win the title.

This from a team that went 2-17 last year, but for Roman fans, that is a distant memory as the Cahillites attempt to snare a CL baseball championship for the first time since 1992 and third time altogether (Roman also won in 1926 and 1978).

On May 21 at Widener University (3:45 p.m.), Roman will face whichever team survives the losers’ bracket, which as of May 16 will be La Salle, Neumann-Goretti, or Cardinal O’Hara. If the Cahillites win, a major celebration will begin. If they lose, then the same two teams will meet two days later, same starting time and same location.

While Roman’s wins at favored Archbishop Wood and La Salle were impressive, the Cahillites’ latest success over O’Hara at neutral Immaculata University was something out of the Twilight Zone.

Playing an O’Hara team that one game earlier had stunned Neumann-Goretti, 5-2, behind a grand slam by Nolan Cummings, the Cahillites took full advantage of numerous O’Hara errors, scoring five unearned runs in the process.

Trailing 2-1 in the sixth, Roman scored three runs – aided by senior Mike Opiela (4 hits and an RBI) – to take a 4-2 lead. But Cummings once again came through with a huge hit, this time a two-run single to tie the game at 4-4. In the eighth, both squads scored single runs. In the ninth, Roman took a 6-5 lead on an errant throw. Preserving the lead was junior reliever Connor McKenna (2 for 4, RBI), who set the side down in order, the final two via strikeout.