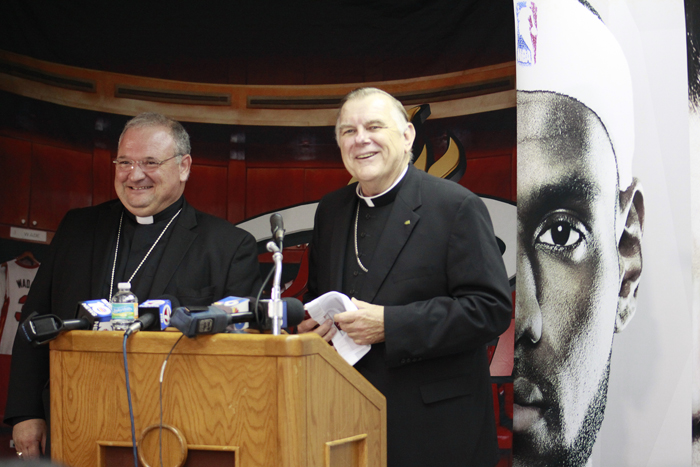 Miami Archbishop Thomas G. Wenski, right, is joined at a June 4 news conference by Miami Auxiliary Bishop Peter Baldacchino. For the fourth year in a row, as the Miami Heat competes for another NBA championship, Archbishop Wenski has made a friendly wager with the bishop of the opposing city with Archbishop Gustavo Garcia-Siller of San Antonio. This year, the Miami side of the wager should they lose to the San Antonio Spurs is key lime pie, Cuban coffee and the cafeteria in which to brew it, a bushel of Florida oranges and grapefruits and a donation to San Antonio's Catholic Charities. (CNS photo/Ana Rodriguez-Soto, Florida Catholic)

If Miami loses, the archbishop said he will send the San Antonio archbishop key lime pies from the southernmost point in the U.S., a supply of Cuban coffee and the “cafetera” in which to brew it, along with a bushel of Florida oranges and grapefruit. The Archdiocese of Miami also will make a donation to San Antonio’s Catholic Charities.

If the Miami Heat wins, San Antonio’s archbishop will make a donation to one of the Archdiocese of Miami’s charities.

“I’ve been doing this since I got to Miami,” the archbishop said at a news conference June 4 at the pastoral center. He added that the bets — thanks to some extraordinarily talented basketball players — have worked out pretty well for the home team, as the Miami Archdiocese last year received a heaping helping of San Antonio beef brisket that wound up feeding the homeless at Camillus House, a Miami shelter.

Miami also was on the winning end when the Heat defeated the Oklahoma City Thunder two years ago, although there was that loss to the Dallas Mavericks in 2011.

“We won’t get into that,” said Archbishop Wenski, who came to the news conference wearing a Heat cap and was surrounded by larger-than-life-size posters of Heat players LeBron James, Chris Bosh and Chris “Birdman” Andersen.

On a more serious note, the archbishop rebounded the “white hot” media attention to ask everyone to pray for the success of Pope Francis’ June 8 “prayer summit” with Palestinian President Mahmoud Abbas and Israeli President Shimon Peres at the Vatican.

The archbishop noted that Sunday is observed as Pentecost by Christians around the world.

“May these prayers help shape a peaceful and just solution to the many problems facing the Middle East,” he said. “We all pray to the God of Abraham for the gift of peace.”

Rodriguez-Soto is editor of the Miami archdiocesan edition of The Florida Catholic.

NEXT: Phillies might want to restock pitching staff with Saints