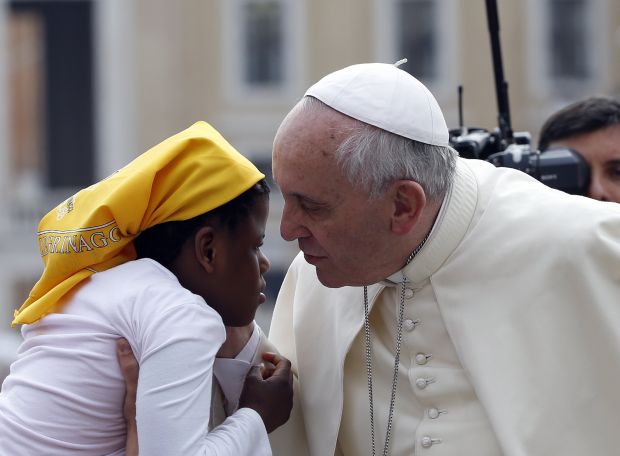 Pope Francis greets a young pilgrim as he arrives for his weekly audience in St. Peter's Square at the Vatican May 7. (CNS photo/Tony Gentile, Reuters)

“An important part of humanity does not share in the benefits of progress and is, in fact, relegated to the status of second-class citizens,” the pope said May 9 during a meeting at the Vatican with U.N. Secretary-General Ban Ki-moon and members of the U.N. System Chief Executives Board for Coordination.

The board includes the directors of 29 specialized agencies and U.N. departments. The Vatican and Catholic organizations around the world work closely with many of them, such as the World Food Program and the U.N. High Commissioner for Refugees. However, tensions also have arisen with some of the departments and agencies, particularly concerning population control programs and efforts to broaden access to legalized abortion.

While Pope Francis did not dwell on the tensions or mention any of them specifically, he insisted that the promotion of human dignity include a recognition that “life is sacred and inviolable from conception to natural death.”

The pope’s meeting with the board came just days after Vatican representatives were questioned by the U.N. Committee Against Torture and Other Cruel, Inhuman or Degrading Treatment, particularly regarding the church’s handling of the clerical sexual abuse scandal, but also about the church’s opposition to abortion in all cases.

During the May 5-6 hearing, Felice Gaer, vice chair of the committee, had said that “laws that criminalize the termination of pregnancy in all circumstances can violate the terms” of the international treaty against torture and inhuman or cruel treatment. Archbishop Silvano Tomasi, the Vatican representative to U.N. agencies in Geneva, responded that the Catholic Church “condemns torture, including for those who are tortured and killed before they are born.”

At the May 9 meeting with the U.N. board members, Pope Francis said improving the lives and health of all the world’s people “involves challenging all forms of injustice and resisting the ‘economy of exclusion,’ the ‘throwaway culture’ and the ‘culture of death,’ which nowadays sadly risk becoming passively accepted.”

The U.N.-coordinated Millennium Development Goals made significant progress in decreasing extreme poverty and improving education levels in many countries, the pope said, but “it must be kept in mind that the world’s peoples deserve and expect even greater results.”

The key to continued improvement, he said, is to address “the structural causes of poverty and hunger, attain more substantial results in protecting the environment, ensure dignified and productive labor for all and provide appropriate protection for the family, which is an essential element in sustainable human and social development.”

Progress requires the cooperation of governments, international agencies, scientists and technicians, he said, but it will not occur without a broad commitment of individuals to solidarity.

“The gaze, often silent, of that part of the human family which is cast off, left behind, ought to awaken the conscience of political and economic agents and lead them to generous and courageous decisions,” he said.

People also must recognize that the spiritual, intellectual and material goods “which God’s providence has placed in our hands” are meant to be shared, including through charitable aid and “the legitimate redistribution of economic benefits by the state.”

NEXT: Pope to beatify Pope Paul VI at end of synod on the family