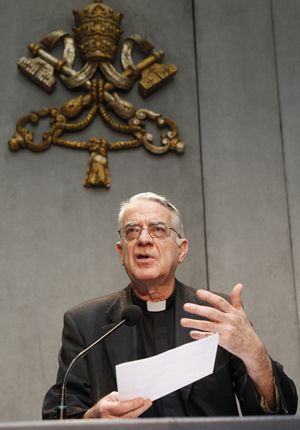 VATICAN CITY (CNS) — Days before a Vatican delegation was to appear before a U.N. committee, the Vatican’s spokesman said he hoped the hearing would focus on implementation of an international treaty against torture and not be manipulated to focus instead on the clerical sexual abuse crisis.

When such discussions do not focus on the treaties they are called to monitor, “the committees risk losing authority and being reduced to tools of ideological pressure,” said Jesuit Father Federico Lombardi, the spokesman.

The Holy See, which in 2002 signed the Convention Against Torture and Other Cruel, Inhuman or Degrading Treatment, was scheduled for a regular periodic review in Geneva May 5-6. Seven other countries also were scheduled to appear before the committee during its April 28-May 23 session.

The review process allows for input from non-governmental organizations. The New York-based Center for Constitutional Rights, representing Survivors Network of those Abused by Priests, filed a report with the committee asking for a consideration of the clerical sexual abuse scandal. The center said that “rape and other forms of sexual violence are recognized as torture and cruel, inhuman, and degrading treatment, and the Vatican has fallen woefully short of its obligation to prevent and protect against these crimes” in the way it has handled the scandal.

In a statement May 2, Father Lombardi said the purpose of the committee meeting is to review the Vatican’s report — submitted in 2012 — on implementing and enforcing the treaty against torture. “This is a normal procedure of open dialogue,” in which different sectors of society can play a role by presenting comments and recommendations, he said.

The process U.N. committees use to review treaty adherence can include questions “not strictly related to the text” of the treaty, but to broad interpretations of its intent and inspiring principles, he said. “For instance, this occurred last January” when a review of the Vatican’s adherence to the Convention on the Rights of the Child included challenging questions about the Vatican’s response to clerical sexual abuse of minors in many parts of the world.

“A contributing factor is often the pressure exercised over the committees and public opinion by NGOs with a strong ideological character and orientation,” Father Lombardi said. “The extent to which this is manipulated and forced is clear to any unbiased observer.”

He expressed the Vatican’s hope that the review of the Holy See’s adherence to the anti-torture treaty would be “serene and objective,” as well as “pertinent to the text” of the treaty and its objectives. “Otherwise, the conventions may be distorted and the committees risk losing authority and being reduced to tools of ideological pressure rather than a necessary stimulus toward the desired progress in promoting respect for human rights.”

“Given the nature of this convention — which relates principally to matters regarding criminal legislation, criminal procedure, the prison system, international relations in the legal domain” — he said, the Holy See signed the convention on behalf of Vatican City State, which is the only geographical territory over which it exercises complete control.

Beyond the Vatican boundaries, Father Lombardi said, the Holy See uses its teaching authority to condemn torture and cruel and inhumane treatment and to promote the principles that inspire the treaty.

Within Vatican City, the 2012 written report noted that a revision of the city-state’s laws was underway. The revised laws went into effect Sept. 1, 2013, Father Lombardi said, and they “effectively ensure” that the Vatican’s criminal law and procedures are in accordance with the treaty’s stipulations.