Sisters’ ministry to the poor of Kensington flourishes 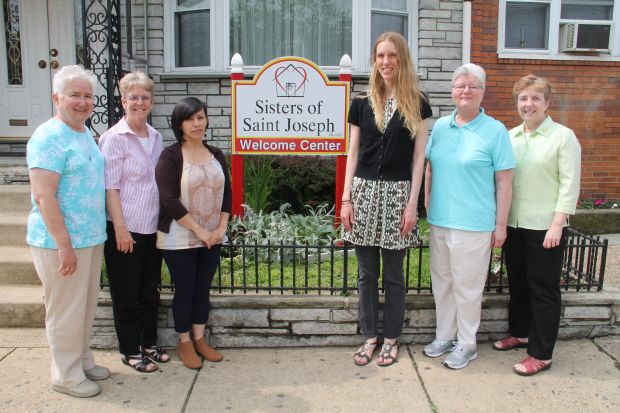 When the Sisters of St. Joseph Welcome Center on East Allegheny Avenue in Kensington opened its doors 11 years ago, it did so because the sisters had great concerns that because parishes and schools in the region were closing, “we were losing our presence to people on the margins, the poor and needy,” said Sister Eileen Marnien, one of the founding members who remains in the ministry.

To underscore that point, Ascension of Our Lord Church just a block or so away on Westmoreland Avenue, where St. Joseph’s Sisters had taught, closed its doors in 2012 after 113 years of ministry.

The Welcome Center is located in three joined properties that formerly housed a funeral home and medical offices. Initial funding came mostly from the St. Joseph Sisters’ Motherhouse, utilizing part of a grant given to them by the McShain Foundation.

When the center opened, the idea was to serve the needs of the community, whatever they were, but the sisters very quickly discovered the greatest need was services to immigrants, Sister Eileen explained.

Actually, Sister Marian Behrle had already been working on a literacy project, teaching English skills to women, and the new center focused on expanding that ministry. The great advantage of the Welcome Center was it was relatively large, and the sisters could establish a convent on the upper floor.

Formerly in parishes, “we were there in the morning and had to go to the next spot in the afternoon,” Sister Marian said. “This was ideal.”

“I couldn’t believe what an opportunity this was. It was my dream of religious life,” Sister Eileen said. “You live in the neighborhood and become part of it. We designed it so we could be available to the people beyond the workday. I had been working in the literacy project teaching adults and traveling around. We would be at one place in the morning and another in the afternoon.”

Although most people are familiar with St. Joseph Sisters through their education apostolate that was not their original ministry at their foundation in Le Puy France, in the 17th century.

“This is part of our founding — go out into the city wherever the people are,” said Sister Pat Mullen, a former teacher and principal who has also been at the Welcome Center from the beginning. “The people are eager to come here, some come at night half asleep after working all day, but they come.”

Sister Connie Trainor is the newest member of the current team at the Welcome Center team — just nine months at the center but with years of experience in social ministry in Nevada, Delaware, Camden and other locations in New Jersey, and North Philadelphia.

“It was like a dream come true to come and work with Sisters Eileen, Marian and Pat and so many wonderful people so new to this country,” she said.

Part of the secret of the success of the ministry is that the many people who come to the door are not considered clients, but friends. Although many come from Latin America there are also Poles, Albanians, Vietnamese, Haitians and Moroccans.

On a recent day a small group of women were being drilled by volunteer Denis Jones on some of the questions they might encounter on a citizenship test. “What territory did the United States purchase from France in 1803?” “Who was President of the United States during World War I?” “How many amendments are there to the Constitution?” Judging by the answers they are bound to pass the test.

As to why they want to be citizens, for Antonia Santos from the Dominican Republic, it was because “I want to vote,” she said.

That was also a reason for Maria Ortega from Nicaragua, who came to the U.S. 15 years ago, but also “to give my children better opportunities,” she said.

Volunteering to teach is a special joy for Jones because “I feel I can relate to immigrants,” he said. “My family came from Ireland. I was the only one born in this country and I want these people to enjoy the journey to citizenship my family had.”

Becoming a citizen or even simply remaining in America is just part of the work and for that reason Nancy Bordewick, who is certified in immigration work, came to the Welcome Center first as a volunteer and now as a staff member. Her task is to assist recent arrivals with some of the very complicated applications and other immigration issues.

No one is asked what their legal status is but of course the issue can come up, and Bordewick assists the people when it is possible, for example including the serious issue of minors who were brought into the country without documents and face a deferred action on possible deportation to continue their education.

“There is satisfaction on working with people from all over the world who come here, trying to become citizens, trying to bring their family here,” Bordewick said. “Each case is unique and the majority of people we can help.”

Rosa Monroy is certainly one of the success stories. She emigrated from Guatemala 14 years ago with very little English skills. First she studied in classes at Ascension and then at the Welcome Center. She learned both English and office skills at the Welcome Center to the point where she was a volunteer and now for the past five years an administrative assistant. “I had a hard time, I got a lot of help and now I love giving back,” she said.

Other programs conducted at the center include computer skills, thanks to a computer lab funded by the Connelly Foundation, support groups, discussion groups and even Zumba exercise sessions.

The center is bursting at the seams but an adjacent property has been obtained and after renovations to it are complete, who knows what will be added.

Schools and parishes may close, but the Christ-given mission of outreach to people in need continues, often in new and unforeseen directions. If you don’t believe it visit the Sisters of St. Joseph Welcome Center.

NEXT: From North Philadelphia, a priest for the inner city