From North Philadelphia, a priest for the inner city 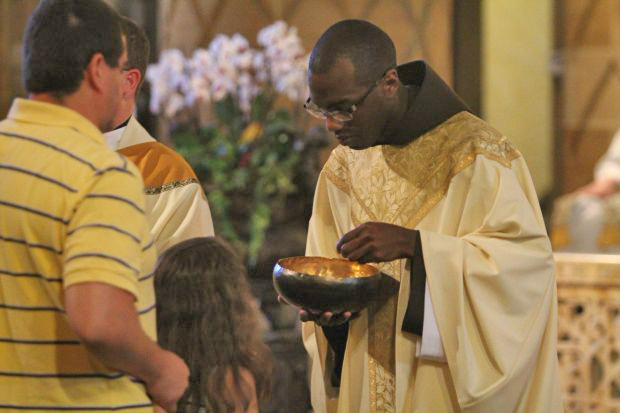 Capuchin Franciscan Father Richard Owens distributes Communion during a Mass he celebrated June 15 at his home parish, Our Lady of Hope, in Philadelphia. (Sarah Webb)

When a school that describes itself as the only Catholic vocational high school in the country announces one of its graduates is to be ordained a priest, that’s news because young men who are seminary-bound usually pursue an academic track during their high school years.

When that same school announces there are two alumni being ordained, that’s really big news. Maybe it shouldn’t be. When Jesus was picking his twelve, he didn’t find them studying in the Temple. Most of them were ordinary working stiffs.

Charles Ravert, Mercy Vocational’s class of 2006 who graduated the school as a certified nursing assistant, was among six men ordained for the Archdiocese of Philadelphia by Archbishop Charles Chaput on May 17. (Read about the ordination here and see more resources in our Priesthood 2014 section.)

His first Mass was celebrated at St. John the Baptist Church, Philadelphia, on May 18 and his first assignment is at St. Charles Borromeo Parish, Bensalem. 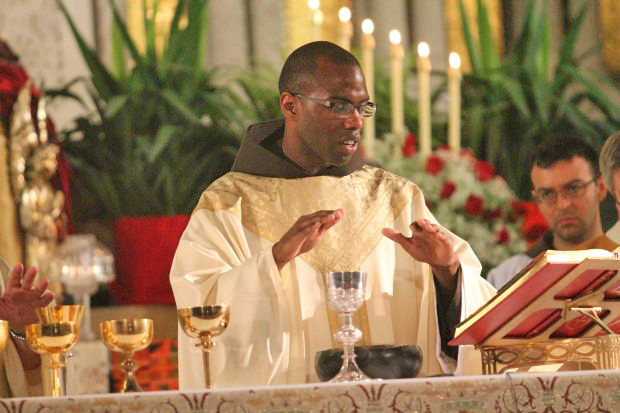 More recently, Richard Owens, Mercy Vocational class of 2000 who pursued business studies at the school, was ordained as a Capuchin Franciscan priest in Pittsburgh on June 7, and his first assignment will be at St. Joseph Parish in York, Pa.

“They both had careers,” said Religious Sister of Mercy Rosemary Herron, president of Mercy Vocational High School. “We are delighted for both young men.”

The Sisters of Mercy encouraged both as they discerned their future, Sister Rosemary said, especially “Sister Raymond Mary, who prayed for them all during their seminary years and is in heaven right now praying with us.”

Fathers Ravert and Owens are the first to be ordained in the history of Mercy Vocational, a tiny coeducational high school with only 345 students, but “we are planting the seeds,” Sister Rosemary said.

Father Owens came back to North Philadelphia on June 15 to celebrate Mass at Our Lady of Hope, his former parish, which encompasses the former Holy Souls Parish where much of his childhood was spent.

“I knew from the first he would be a priest, probably since grade school,” said his mother Mary Owens, who was overjoyed by the ordination of her first-born child. 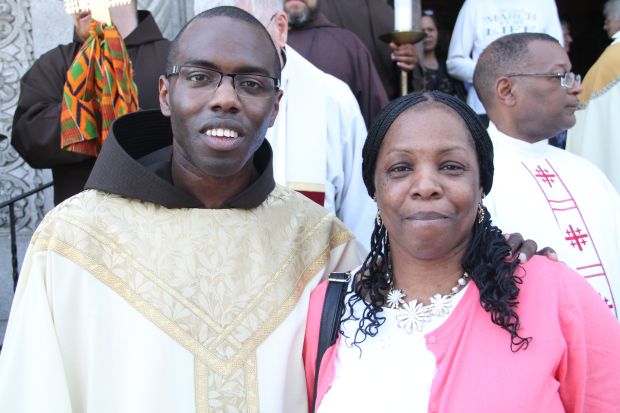 Father Owens poses with his mother Mary outside Our Lady of Hope Church in North Philadelphia. (Sarah Webb)

For his own part, Father Owens admits the thought was in his mind at an early age, but not a certainty.

“The Sisters of Mercy were at Holy Souls and they were very influential to my vocation, their door was always open,” he said. “I remember going to their convent for prayer and for meals. I was also inspired by the priests at Our Lady of Hope. In their joy in the priesthood they were examples of good priests.”

Although he was fairly sure he wanted to be a priest he was generally advised he should continue his education and work a bit before making a final choice. Continuing on at La Salle University, he also thought of the possibility of joining the Christian Brothers, but decided against it because he did not want to be a teacher.

His chief desire was to work among the poor in the inner city, much like the area around Our Lady of Hope, and it was through the sisters at the Carmelite Monastery in the area that he was put in touch with the Capuchins because of their ministry to the poor.

Finally after a post-college year working in New Jersey he formally entered the Order of Friars Minor, Capuchins. The first year of novitiate, a year of silence and prayer, was definitely the hardest but he got through it and now, after seven years, he is a priest.

Many of the priests who were part of his vocation journey were at Our Lady of Hope to concelebrate with Father Owens.

“There couldn’t be a better representative of the parish than Father Owens,” said Msgr. Kenneth McAteer, who was pastor of Our Lady of Hope during Father Owens’ youth.

“I tried to encourage his vocation by having him as an altar boy (and) we talked about the priesthood a lot,” Msgr. McAteer said. “I tried to be an example for him.”

Homilist for the Mass was Father Stephen Thorne, ordained in 1998 and the last previous religious vocation from the combined parishes that make up Our Lady of Hope. There well may be more in the future.

“The joy of the Gospel is really present here,” said Father Efren V. Esmilla, the current pastor of Our Lady of Hope. “We are alive despite the many challenges. We have about 10 young high school men attending an upcoming (Quo Vadis) discernment retreat in Quarryville.”

PREVIOUS: Sisters’ ministry to the poor of Kensington flourishes