Marchers feel encouraged in their stance for traditional marriage 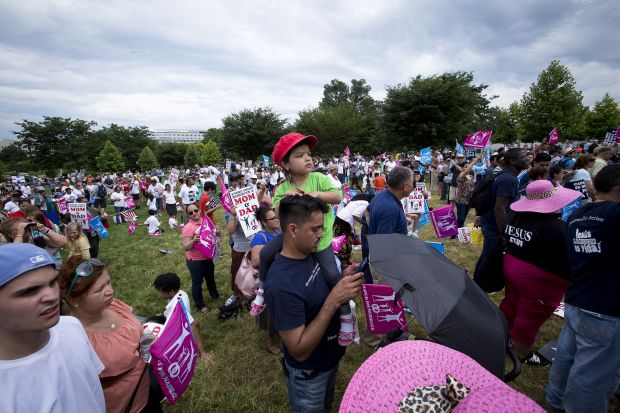 A man holds a young girl as they listen to a speaker calling for support of traditional marriage on the West Lawn of the Capitol in Washington June 19. (CNS photo/Tyler Orsburn)

WASHINGTON (CNS) — Father Rick Kosisko found a lot to be thankful for during the March for Marriage.

Joined by hundreds of supporters of traditional marriage at the U.S. Capitol June 19, the pastor of St. Pius X Parish in Mount Pleasant, Pennsylvania, told Catholic News Service he was pleased to know that others felt it was important to show up in Washington to share their views about the sacredness of the bond between one man and one woman.

“We feel called to be here,” he said.

“I saw a joyful group there at the rally,” he added as he and about 20 parishioners from across the Diocese of Greensburg, Pennsylvania, made their way to meet with congressional representatives to press for policies that support traditional marriage. “I think it’s a foundation, and much like the March for Life, it will continue to grow.”

Mary Ellen Pellegrino, director of Catholic Charities of the Diocese of Greensburg, joined the Pennsylvania contingent. The group planned to meet with four elected representatives from Pennsylvania during their visit.

“We’re just here to tell them that we hope they will protect marriage, traditional marriage. I’m here because I want to champion the best interests of children,” she said. “In changing the definition of marriage, I think the children get lost.”

“This march is the seed of a movement that is global,” said Deacon Keith Fournier of St. Stephen Martyr Parish in Chesapeake, Virginia, more than five hours from Washington. He said the long drive was worth the effort.

“It’s good to see a grass-roots movement being raised here,” he said.

“We’re not protesting anything,” he continued. “We’re standing for something, something good and wonderful: marriage, and the right of children to have a mom and a dad. The pro-life movement began with events like this and we’ve made tremendous progress. So I’m very, very encouraged.”

The event was especially well attended by young people who wanted to make their voices heard.

Carrying the state flag of Maryland, 13-year-old Xavier Krebs of Catonsville, Maryland, joined the march with several of his peers. “I’m here to make sure that people my age have a better future,” he told CNS. “To make sure we do things God’s way. God says that marriage is between one man and one woman and that’s how it should be.”

Helen Gorman, 17, came to the march with a friend, Kevin Oriani, 22, from Hyattsville, Maryland.

“I’m here because I don’t want the voice of those who believe in traditional marriage to be silenced. If society gets to a point where we can’t speak about it without immediately being censored, then it will be very hard to restore a culture that prizes and loves marriage,” Gorman said.

Many families with young children also gathered at the Capitol.

Jeff Coogan of Staten Island, New York, and his wife, Divonne, listened to the speakers from a distance as their toddler, Gerard, waved a sign that read, “Every child deserves a mom and a dad.”

“We’re here because we want to make a public stand in favor of marriage,” Coogan said. “We’re glad to meet other people of like-mind, and maybe our presence here will change someone’s mind.”

Christina Andrews and her husband Jonathan brought their six children to Washington from Tappahannock, Virginia. “I believe in God’s definition of marriage as one man and one woman for life,” Andrews said. “Truth is truth, no matter what people say.”

Those in attendance also varied in religious beliefs.

“A marriage constitutes a man and a woman, and to try to uproot this concept is flaunting a dismissal of the recognition that it is the almighty sustaining us, giving us life,” said Rabbi Yisrael Dovid Weiss of Monsey, New York. He and four other rabbis carried a banner that read, “The Almighty, in His Torah, forbids same-sex marriage.”

The march also had its opponents. Several protesters stood beyond the stage in view of the crowd, carrying rainbow flags and signs that read, “Love is love” and “Love not hate.”

Mandy Roach, 24, of Rhode Island, wearing a rainbow flag as a cape, told CNS, “I think every child should just have someone who loves and supports them. If you love someone and want to spend your life with them, you should be able to marry them just like anyone else.”

NEXT: Archbishop: Catholics should be free to serve with ‘eucharistic heart’