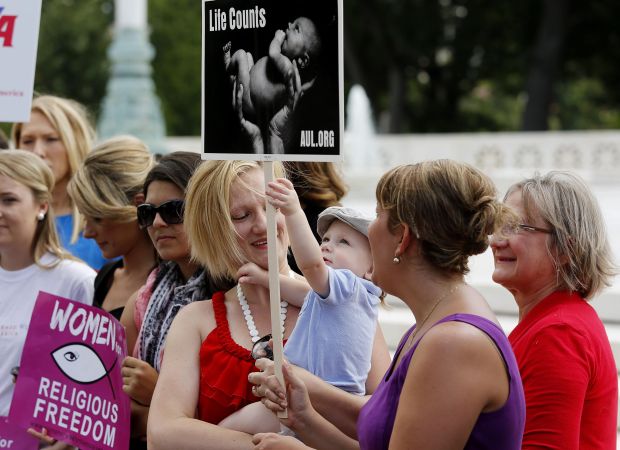 A pro-life demonstrator holds her child as activists gather outside the U.S. Supreme Court in Washington June 26 to celebrate the court decision striking down a Massachusetts law that mandated a buffer zone to keep pro-life demonstrators away from abortion clinics. (CNS photo/Jim Bourg, Reuters)

WORCESTER, Mass. (CNS) — When the U.S. Supreme Court unanimously ruled June 26 that the buffer zones around abortion clinics in Massachusetts violated First Amendment rights, pro-life advocates outside a Planned Parenthood clinic in Worcester were doing what they always do — praying on the sidewalk.

“I’m very excited,” said Nancy Clark of Worcester, one of the plaintiffs in the case. “The Holy Spirit is slowly guiding us in the right direction.”

The case, McCullen v. Coakley, was brought by several people who volunteer as “sidewalk counselors” outside Planned Parenthood clinics in Boston, Springfield and Worcester. The court’s decision reversed an appellate court decision upholding a 2007 Massachusetts law that made it a crime for anyone other than clinic workers to stand within the yellow semicircular lines painted 35 feet from clinic entrances.

Roderick Murphy, director of Problem Pregnancy, a Worcester center that offers alternatives to abortion and is across the street from Planned Parenthood, said he is “overjoyed by the decision.”

“Why is it that the Massachusetts Legislature is so enthralled by Planned Parenthood that they pass legislation that removes civil rights from citizens?” Murphy asked.

He said it was incredible to him that people were not allowed to pass out literature and talk to people about pro-life when they can do so about other subjects.

Murphy also said he had predicted the Supreme Court would rule the 35-foot buffer zone unconstitutional but he was surprised that the decision was unanimous.

Eleanor McCullen, the lead plaintiff whose name appears in the decision, told The Catholic Free Press, newspaper of the Diocese of Worcester, she was “very elated” by the decision. The 77-year-old grandmother, a member of the Boston Archdiocese, was pleased with the ruling and that it was unanimous.

“It’s wonderful that they see that,” she said. “It restores my faith in the country.”

She also said she is glad that she and other pro-life advocates can be voices for the unborn without the restrictions of a 35-foot buffer zone. She said she can hold quick, one-on-one, personal conversations with couples and “offer help and love.”

When she is asked that question, she says the church can give them help with medical care, finances and housing.

“We surround the couple with love so they don’t feel abandoned,” she said. “We offer hope and help. This isn’t like buying a car. This is life and death.”

Michael DePrimo of Hamden, Connecticut, an attorney for the plaintiffs, said the court’s decision was a “great opinion for pro-life advocates, especially those who wish to engage in one-on-one conversations with men and women outside abortion clinics. Not only did the court rule that the Massachusetts statute was unconstitutional, it brought into question whether any law creating a buffer zone is constitutional.”

Clark said she was in the delineated buffer zone in Worcester the morning of June 26 talking to a young woman who was going into the Planned Parenthood clinic. She said the girl had approached her to talk so she entered the zone to talk to her.

Clark noticed new “no trespassing” signs on the fence outside Planned Parenthood and at their driveway but hadn’t yet heard about the Supreme Court decision. “I said to the man I was praying with, ‘We must have won.'”

“We still need a lot of prayers,” she said, but “now we will be able to talk to the girls without screaming to them.”

Clew is contributing editor and Russell is executive editor at The Catholic Free Press, newspaper of the Diocese of Worcester.

PREVIOUS: The future of TV — and how it may be shaped by the Supreme Court

NEXT: Reflections on Civil Rights Act: Progress made, work still to do