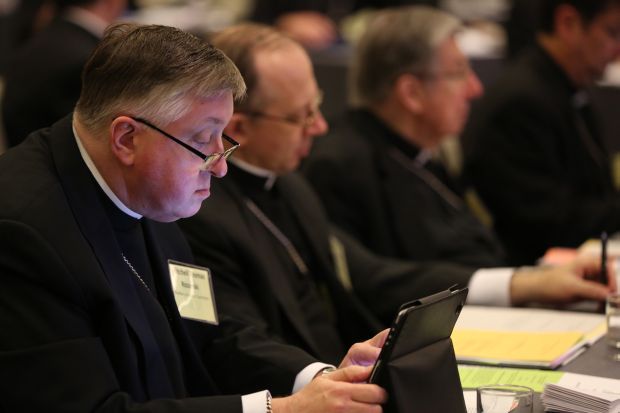 Auxiliary Bishop Mitchell T. Rozanski of Baltimore reads on his laptop June 11 during the annual spring meeting of the U .S. Conference of Catholic Bishops in New Orleans. (CNS photo/Bob Roller)

Bishop Rozanski will succeed Bishop Timothy A. McDonnell, 76, whose resignation was accepted by the pope.

The appointment was announced June 19 in Washington by Archbishop Carlo Maria Vigano, apostolic nuncio to the United States.

Bishop Rozanski, 55, was ordained a priest for the Baltimore Archdiocese in 1984. He became an auxiliary bishop in the archdiocese in 2004.

“I will remain forever grateful for the privilege to have ministered as priest and bishop in the Archdiocese of Baltimore for nearly 30 years,” Bishop Rozanski said in a June 19 statement.

Bishop Rozanski will be installed Aug. 12 in Springfield.

Introduced at a gathering of diocesan employees and media June 19 at the diocese’s Bishop Marshall Center, Bishop Rozanski expressed his gratitude to Bishop McDonnell, his gratefulness for his priestly vocation and his willingness to serve in his new assignment as bishop of Springfield.

“In faith we believe it is the will of God,” Bishop Rozanski said. “I ask God to continue to unite us… to be people who truly live the Gospel and the will of God.”

Asked what he most wants parishioners in the Springfield Diocese to know about him, Bishop Rozanski said he “felt a call to priesthood very early in life” and that “the gift of family, the gift of faith and the gift of priesthood have been central to my life.”

He also praised Bishop McDonnell and “his love for the people of the diocese.”

In response to a question about ministering to the growing Hispanic Catholic community in western Massachusetts, Bishop Rozanski explained that the church has historically welcomed immigrants and refugees. “As a church, Jesus gives us the model and the example of welcome,” he said.

The Baltimore native grew up in Sacred Heart of Mary Parish in the Graceland Park neighborhood, where he attended the parish elementary school. The son of a Bethlehem Steel police officer graduated from Our Lady of Mount Carmel High School in Essex, where he had served as student council president. He prepared for the priesthood at the Theological College at The Catholic University of America, Washington.

Before becoming a member of the hierarchy, Bishop Rozanski served as an associate pastor of St. Anthony of Padua Parish in Baltimore, and St. Isaac Jogues Parish in Carney, Maryland. In 1993, he was named administrator and then pastor of Baltimore’s Holy Cross and St. Mary Star of the Sea parishes before becoming pastor of St. John the Evangelist Parish in Severna Park, Maryland, from 2000 to 2004. Other parish assignments in Maryland included appointments at St. Michael the Archangel, Overlea; Cathedral of Mary Our Queen, Homeland; and Church of the Immaculate Conception, Towson.

In leading this vicariate, Bishop Rozanski was active in ongoing pastoral planning and was well known for traveling great distances over a sprawling territory. He worked with parish and regional leaders on a variety of projects.

Bishop Rozanski also served as vicar for Hispanics in the archdiocese, joining with other faith leaders in advocating for laws supporting immigrants. He was a vocal supporter in passing the Maryland DREAM Act, a law that allows certain undocumented immigrants to pay in-state college tuition rates.

Nationally, Bishop Rozanski served as co-chairman of the Polish National Catholic-Roman Catholic Dialogue. In 2013, he was elected chairman of the U.S. bishops’ Committee on Ecumenical and Interreligious Affairs.

Contributing to this story was George P. Matysek in Baltimore and Rebecca Drake in Springfield.

NEXT: Relic of St. Anthony of Padua to visit Massachusetts parish