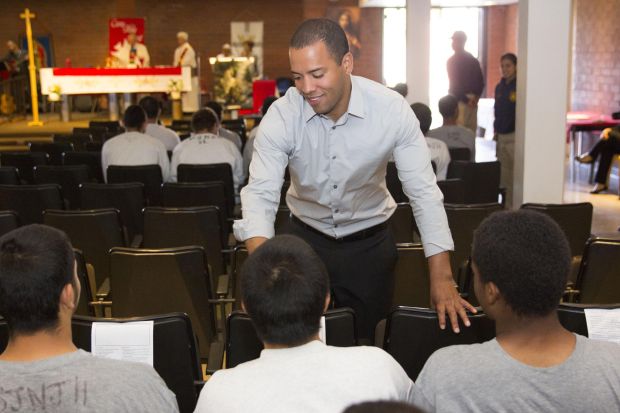 Xavier McElrath-Bey, sentenced to 25 years in prison at the age of 13 and now an advocate for juveniles, offers sign of peace to incarcerated minors during a June 8 Mass at Barry J. Nidorf Juvenile Hall in Sylmar, Calif., where a letter from Pope Francis to the youth was read. (CNS photo/Courtesy of the Archdiocese of Los Angeles)

WASHINGTON (CNS) — More than 2,000 people across the United States are currently serving life sentences without parole for crimes they committed as children.

“We are looked down on by society, an embarrassment to be swept under the rug and forgotten,” wrote one inmate.

Pope Francis recently sent a message of hope to a group of these prisoners.

In early May, the pope responded to hundreds of letters from inmates incarcerated for life as juveniles, assuring them of his prayers and that the Lord “knows and loves each one of them.”

A larger movement of people is working to reform the way in which juveniles are held accountable for crimes committed as youth. The Washington-based Campaign for the Fair Sentencing of Youth advocates for fair sentences for children who commit crimes, and for a justice system that is more restorative than retributive.

Advocates for restorative justice and fair sentencing, like Jody Kent Lavy, ultimately seek an end to the practice of sentencing children to life in prison without parole.

“I’ll never forget a 15-year-old kid looking me in the eyes and saying that he had no hope for his life,” said Lavy, director and national coordinator of the campaign, regarding her time volunteering with children sentenced to die in prison.

A year ago, after Pope Francis washed the feet of 12 young inmates at an Italian detention center during Holy Week, Lavy was inspired to draw the pope’s attention to children imprisoned for life without parole in the United States. She, along with the help of Jesuit Father Mike Kennedy, organized a letter-writing campaign; 500 of these inmates wrote letters to Pope Francis.

“We figured it would be an opportunity for the people on the inside to have a voice, to express (to the pope) what it’s like to be told as a child that they are unworthy of a second chance,” Lavy said.

Lavy didn’t expect a response from the pope, but then a letter with his simple yet poignant message of mercy, reconciliation and forgiveness arrived from the Vatican. Father Kennedy, who ministers directly to incarcerated youth in juvenile halls in the Los Angeles area, received the letter. The kids at the juvenile hall, he noted, were inspired that someone so influential and with so much credibility as Pope Francis would assure them of their own worth as individuals.

On June 8, a special Mass was celebrated at the Barry J. Nidorf Juvenile Hall outside Los Angeles. More than 100 people were present, including Father Kennedy, Lavy and dozens of young people serving life without parole. Also present to give his testimony of personal change was Xavier McElrath-Bey, a young man who was convicted of first-degree murder at age 13.

He served 13 years in prison, earning a bachelor’s degree while incarcerated; now he holds a master’s degree, speaks to at-risk kids and legislators, and advocates for the fair sentencing of youth.

Hope was a pervading theme of the Mass on Pentecost Sunday.

“We prayed for the spirit to come upon our politicians and our leaders,” said Father Kennedy, “to have their hearts moved to realize that kids like Xavier deserve a second chance because they can contribute to society.”

The letter from Pope Francis was presented to Lavy and read to the young people in attendance. “In saying that he (the pope) is praying for these people, that the Lord is with them, I think really affirms their humanity,” Lavy said later in an interview with Catholic News Service in Washington.

Lavy first became interested in advocating for fair sentencing during her time as a volunteer at the Barry J. Nidorf Juvenile Hall with Father Kennedy. Lavy noticed immediately that the young people in juvenile facilities “had very different upbringings and choices to make as children” — poverty, abuse, drugs, gang activity — that often seemed to contribute to their involvement in criminal activity.

“It became clear to me,” she said, “that if I had been in their shoes growing up, I would be in the very same place.”

Father Kennedy provides liturgical and sacramental support to incarcerated young people through the Jesuit Restorative Justice Initiative. He leads Ignatian retreats in California prisons, bringing inmates closer to God through modes of Jesuit spirituality and by facilitating healing and rehabilitation.

“Kids learn to do ‘deep-sea diving’ to really look at how they’ve been hurt — and by the time they leave, they understand the consequences and significance of what they’ve done,” he said in a telephone interview with CNS from California.

Such healing and rehabilitation are the primary focus and intent of restorative justice. It seeks to amend the justice system to reflect the idea that kids can change and, as Lavy said, that “we’re all better than the worst things we’ve ever done.”

Advocates argue that children should not live their lives behind bars for decisions they made at a stage of mental and emotional immaturity, citing that the intellect, judgment, and understanding of risk and consequences of violence are less developed in children than adults.

Rather, while still holding children accountable for their actions, restorative justice addresses the societal pressures that lead children to commit crimes and seeks, above all, healing.

“We need to minister to people in prison. We need to put time and energy into it,” Father Kennedy said, “because that’s where God is.”

NEXT: Faith compels archbishop to go to march, tell ‘whole truth’ of marriage