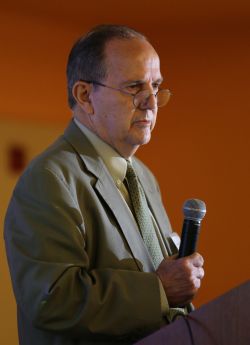 Juan Mendez, the U.N. special rapporteur on torture, speaks June 25 at The Catholic University of America in Washington during a conference to mark the 17th annual June Survivors’ Week, an international observance sponsored by the Torture Abolition and Survivors Support Coalition. (CNS photo/Bob Roller)

WASHINGTON (CNS) — The U.N. special rapporteur on torture encouraged torture survivors and advocates to “look to a torture-free world within our lifetimes” during a conference at The Catholic University of America.

Juan Mendez cited impunity as the “worst enemy we have” in ending the use of torture in a keynote address to nearly 100 activists and survivors of torture from around the world during the Torture Abolition and Survivors Support Coalition’s 17th annual June Survivors’ Week program.

Mendez explained June 25 that people who have endured cruel and inhumane treatment have a duty to contribute to eradicate torture.

“The most important right that survivors of torture have is a right to access to justice,” Mendez said. “We need torture survivors to play an important role in describing the reasons why they were tortured. By illustrating the failure of domestic safeguards against torture, we can correct those failures and implement reasonable and effective remedies for them in the future.”

Pope Francis called for the abolition of torture, which he condemned as a “very grave sin” during remarks June 22 after praying the Angelus in St. Peter’s Square at the Vatican. He invited Christians around the world to support victims of torture and “commit themselves to work together for its abolition.”

Adotei Akwei, managing director for government relations at Amnesty International, urged victims to work with national leaders to prevent future acts of torture during a panel discussion on human rights and conflict in Africa.

Along with several conference participants, Akwei pointed to the U.S.-Africa Leaders Summit planned for Aug. 5-6 in Washington as a crucial opportunity for President Barack Obama to discuss human rights issues with African leaders from across the African continent.

“If we allow this event to go on as planned and only focus on trade and development, it will be one big photo op and they will all go home and return to business as usual,” Akwei said. “It’s incumbent on all of us in the room to start asking questions, not just about what the United States is going to do, but what are African governments going to do? What are the commitments they are going to make here in Washington that they can be held accountable to when they go back home?”

In observance of the U.N.’s International Day in Support of Victims of Torture, TASSC scheduled visits to Congress to allow victims to bring their stories to individual elected representatives June 26.

Conference participants, including Feyera Sobokssa, a torture survivor from Ethiopia, said they hoped the meetings will encourage congressional leaders to work with Obama to “bring real change to Africa and its people” and ultimately contribute to the eradication of torture worldwide.

Sobokssa explained how he endured severe physical and psychological pain at the hands of the Ethiopian militia. The U.S. granted political asylum to Sobokssa in 2000 and has dedicated his life to providing “a voice to those who cannot speak, who are still being brutalized.”

Experiences such as Sobokssa’s create pathways to the torture-free world for which Mendez has advocated.

“We can and we should consider the possibility that there might be a torture-free world that is accessible to us,” Mendez said. “The international day for victims of torture is an important moment to renew our commitment to see to it that we effectively get rid of torture in our time everywhere in the world.”

NEXT: The future of TV — and how it may be shaped by the Supreme Court