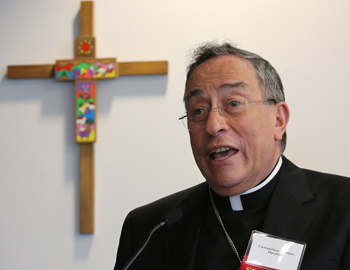 Honduran Cardinal Oscar Rodriguez Maradiaga, president of Caritas Internationalis, gives his keynote address during a conference at the Bread for the World headquarters in Washington June 3. During the conference, Catholic experts looked at libertarianism and why it is incompatible with Catholic social teaching. (CNS photo/Bob Roller)

WASHINGTON (CNS) — The world financial system “has been built as a new idolatry,” charged Cardinal Oscar Rodriguez Maradiaga of Tegucigalpa, Honduras, at a June 3 forum in Washington sponsored by The Catholic University of America’s Institute for Policy Research & Catholic Studies.

During his keynote address, Cardinal Rodriguez issued a ringing endorsement of the church’s competency to critique economic systems.

Some of the church’s critics ask, “What is the hierarchy of the church doing in the economy? They know nothing about the economy,” Cardinal Rodriguez said in his remarks at the forum, “Erroneous Autonomy: The Catholic Case Against Libertarianism.”

Cardinal Rodriguez was introduced by Richard Trumka, president of the AFL-CIO.

Trumka, a Catholic, described during the introduction his father and grandfather’s life in a coal mining company town. Workers were paid in scrip redeemable only at the “company store,” he said. His dad and granddad were clubbed by the “coal and iron police” as they were chased up the steps of the Catholic church in town — the only parcel of land not owned by the company — for trying to start a union, until the parish pastor, crucifix in his hands, stepped between his parishioners and the police, declaring, “This is sanctuary.”

Upon hearing these travails, Cardinal Rodriguez said to Trumka, “I thought you were describing the mining situation in my country in the 1900s.”

Libertarian philosophy over federal budget discussions is “really distorting the debate,” said the Rev. David Beckmann, president of Bread for the World, the Christian citizens’ anti-hunger lobby whose headquarters, a few blocks from the Capitol, hosted the forum.

Bread for the World is a member of the Circle of Protection, as is the U.S. Conference of Catholic Bishops. The “circle” is an alliance of faith-based organizations that has been pushing Congress this decade to spare the poor from the brunt of budget cuts.

However, in the fiscal year 2015 budget proposed by the House Budget Committee chairman, Rep. Paul Ryan, R-Wis., programs benefiting low-income Americans would be on the receiving end of 69 percent of the budget cuts, according to an analysis by the Center for Budget and Policy Priorities. Ryan, a Catholic, had once been an ardent follower of libertarian philosopher and author Ayn Rand, although in 2012 he rejected Rand’s philosophy as atheistic. But Ryan has since come under criticism from some Catholic academics for misstating Catholic social teaching when issuing federal budget proposals.

While dialogue between Catholics and libertarians should not be ruled out, it can be “difficult,” said Meghan Clark, an assistant professor of theology and religious studies at St. John’s University in New York, “because you don’t share the same vocabulary.”

While libertarians may say they embrace the Catholic principle of subsidiarity, which holds that decisions are best made by the smallest or least centralized competent authority, they are silent on the subject, Cardinal Rodriguez said, “when it comes to banks and corporations.”

“Many of the libertarians do not read the social doctrine of the church,” he added, “but now they are trembling before the Book of Piketty,” a reference to French economist Thomas Piketty,” whose 700-page book, “Capital in the Twenty-First Century,” examining wealth inequality around the world, has become a surprise best-seller.

Despite the ills of the current system, Cardinal Rodriguez said political action may help change it. “Politics is often regarded as a dirty game,” he said. “Who else but committed Christians can clean it up?”

NEXT: Members of Neocatechumenal Way take Gospel to the public