Phillies might want to restock pitching staff with Saints 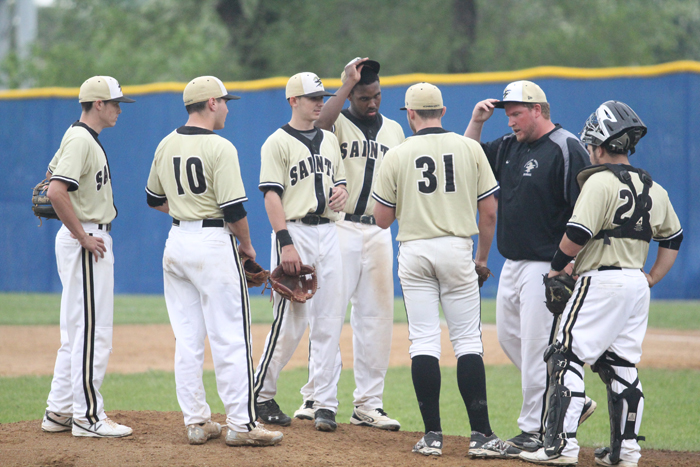 SS. John Neumann-Maria Goretti High School is about five minutes away from Citizen’s Bank Park. Perhaps the pitching-challenged Phillies could send a scout over to their geographical neighbors for some tips.

In a PIAA Class AA baseball quarterfinal June 5 at Allentown’s Parkland High School, the Saints blanked Bloomsburg, 1-0. That number to the right – zero – has become quite commonplace when it comes to Neumann-Goretti’s pitching staff.

The numbers have become staggering, but more on that a bit later.

N-G’s latest heroic hurler was Ethan Pritchett. Despite being “only” a sophomore, Pritchett has played more like a tested veteran when his team has needed it most.

Technically number three in their rotation, Pritchett earlier had helped the Saints capture the Catholic League championship in the loser’s bracket final by blanking Cardinal O’Hara, 3-0, allowing only four hits while striking out seven. That allowed the Saints to continue to the finals, where they whipped Roman Catholic by scores of 11-1 and 11-0.

Against Bloomsburg, N-G’s only run – scored in the third inning by sophomore Brian Verratti thanks to a pair of singles and two wild pitches – was all the Saints needed.

Facing a potent lineup, Pritchett befuddled his foes by striking out nine and surrendering only two hits and one walk. As N-G celebrated, a passerby wondered aloud about the Saints’ pitching dominance.

“No one wants to let up anything,” Pritchett said. “We try to make good pitches and let our defense do the rest.”

In a loser’s bracket battle with La Salle, Jerla tossed a four-hitter in a 1-0 triumph. Then came Pritchett’s aforementioned 3-0 shutout over O’Hara, followed by a four-hit, 11-0 whitewash by Jerla in the Catholic League championship-clinching victory over Roman Catholic.

N-G will next meet Loyalsock Township June 9in the state semifinals. But the Saints aren’t the only local Catholic school still alive in pursuit of a state title.

Far from it. In fact, there remains a possibility that four local Catholic high schools could emerge as state champs. Yes, four.

In a PIAA Class AAAA quarterfinal June 5 also at Parkland High, the Explorers defeated Hazelton, 3-1, and will face Spring-Ford in the semifinals (4 p.m. June 9 at Neumann University).

Senior John Scheffey provided excellence from the mound, firing a complete game six-hitter and picking up a teammate who made a potentially fatal error in the seventh inning by escaping a bases-loaded situation.

In the Class A semis, Devon Prep – coming off a 12-1 win over Canton – will take on Schuylkill Haven on June 9. On the same day, Pope John Paul II, thanks to a 4-1 success against Northeastern, faces Tamaqua in the Class AAA semifinals.

The championships for all four classes occur on Friday, June 13 at University Park.

NEXT: There’s one thing the pope wants you do to: Win!