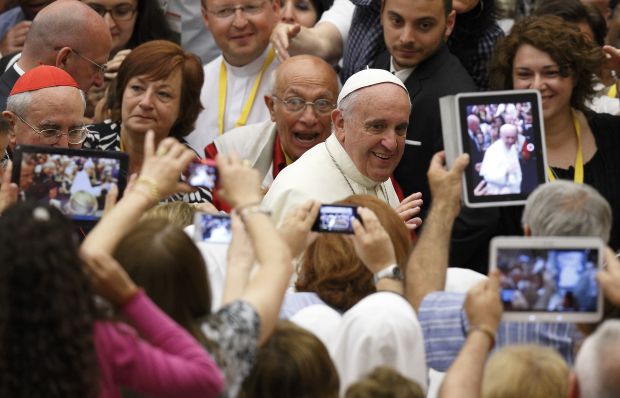 People take photos on tablets and phones as Pope Francis arrives to opens the annual convention of the Diocese of Rome in Paul VI hall at the Vatican June 16. (CNS photo/Paul Haring)

VATICAN CITY (CNS) — “I like to dream of a church that lives the compassion of Jesus,” Pope Francis told more than 7,000 priests, religious, catechists and parish council members from the Diocese of Rome.

If every parish embodies the virtues of compassion, tenderness, patience and welcoming, the Catholic Church will be the mother she claims to be and will continue to generate numerous children, the pope said June 16, opening the Rome diocese’s annual convention.

In a 35-minute talk, most of which was off the cuff, Pope Francis responded to the concerns expressed by a pastor and two catechists about the difficulties of keeping families active in parish life and, consequently, in transmitting the faith to children and young people.

Father Gianpiero Palmieri, pastor of the parish of San Frumenzio, told Pope Francis that in the Diocese of Rome programs for preparing children for first Communion are still popular, but half of the children do not go on to prepare for confirmation, which the diocese usually administers to young people between the ages of 12 and 14.

Pope Francis told convention participants that before joining them for the evening session, he stopped for coffee in the kitchen of the guesthouse where he lives. The cook was still there and the pope asked him how long it would take him to get home; the man responded that his commute was about an hour and a half.

“An hour and a half to go home to his children, his wife,” the pope said.

Pope Francis said he knows that many parents get up early, take their children to school, go to work — sometimes places of “tension and conflict” — and often get home immediately before or even after their children have gone to bed.

In such situations, he said, it is natural for parents to feel like they have “a crushing weight” on their shoulders and they wonder, “Is this living?”

If parents are so overburdened and dissatisfied, he said, how can they help their children discover the meaning of their lives and “the direction to take so that their lives are beautiful and they are happy to get up each morning?”

With everyone in a family running in different directions, the pope said, young people are left without guidance, without someone to trust, without “ideals that warm their hearts” and without hope.

“This is a society of orphans,” he said.

When people don’t experience unconditional love and acceptance from their parents, from other family members, at school or in their parish, the pope said, “it will be much more difficult to understand God’s grace, that grace that cannot be bought or sold, that is a gift of God.”

Yet, Pope Francis said, Jesus promised his disciples he would not leave them orphans. Even if modern society seems to tell people “you don’t matter, you’re disposable,” God will never say that and neither can the church.

“The great challenge of the church today is to become mother,” he said. “If the church is not a mother — I know it is bad to say this, but she becomes an ‘old maid,'” and cannot bring forth children.

The church does not become a mother by going door to door and offering to sign people up as if it were “an association called the Catholic Church,” he said. Rather, the church is a mother when she does what mothers do: offer love, tenderness, a caring gaze, almost endless patience, a welcome and compassion.

“Our mother church seems to be a bit old, not to speak of a ‘grandmother’ church, but aging. We must rejuvenate her,” he said, and “not by taking her to a plastic surgeon.”

The church does not need cosmetic surgery, the pope said, but it needs the energy and joy that come from being a mother, seeing her children gather at home and welcoming their friends as well.

Pope Francis urged all parish workers to be warm and welcoming, to listen to people before asking them to fill out registration forms or pay stipends for different services. The church, he said, must have “a heart without limits, but not just a heart: also a certain gaze, the sweetness of Jesus’ gaze, which often is more eloquent than many words.”

The pope also thanked parish priests, who dedicate every waking moment — and often miss out on a full night’s sleep — to minister to the people in their care.

“It is easier to be a bishop than to be pastor” of a parish, he said. “We bishops always have the possibility of distancing ourselves, of hiding behind (the title) ‘Your Excellency,'” while parish priests are in the thick of things with someone phoning, knocking on the door or cornering him to complain about others in the parish.