Founders of Korean church among martyrs Pope Francis will beatify 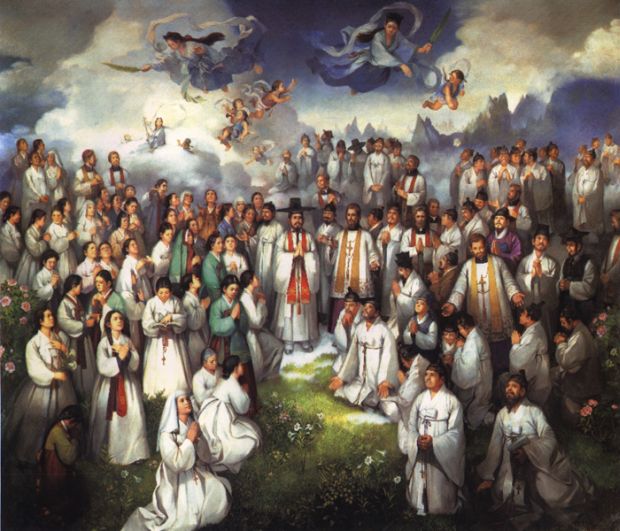 A painting depicts 103 Korean martyrs canonized by Pope John Paul II in 1984. When Pope Francis travels to South Korea in August, he will put 124 additional martyrs on the path to sainthood by beatifying them. (CNS photo/courtesy Archdiocese of Seoul)

MANILA, Philippines (CNS) — When Pope Francis goes to South Korea in August, he will put 124 martyrs on the path to sainthood. Many in this group established the Catholic Church in that East Asian country.

“They are … the fathers, of the (103) Korean martyrs, who really founded the Catholic Church with their blood, with their faith, compassion … their blood shed for Christ,” said Legion of Christ Father Simon Chung of Seoul.

The church in Korea had no missionaries at its origins. Instead, in the late 1700s, intellectuals among the Korean nobility got hold of books on Catholicism from China. Historical accounts said they absorbed these writings and were convinced of the church’s teachings.

Father Chung, who helped document the sainthood cause for the 124 martyrs, said the scholars studied thoroughly what they learned and compared it with the dominant religion in Korea at the time, Confucianism, and to a lesser degree, Buddhism.

This intense study combined with the deeply ingrained cultural practice of honoring the king and showing filial piety to one’s parents helped form the foundation for the church.

This turned society on its head and Catholicism, with no divisions of class, also pushed the limits of what was socially acceptable.

In 1784, one believer trekked to what is now Beijing to be baptized and returned to baptize numerous companions. According to the Catholic Bishops’ Conference of Korea, persecution of early Catholics started off with some leniency; mostly owners of homes where believers gathered were exiled.

But things with the fledgling church of 4,000 took a turn for the worse when, in 1791, Paul Yun Ji-chung, a member of the nobility and one of the 124 martyrs to be beatified, buried his mother according to Catholic burial rites. He and some other nobles burned sacred tablets that were believed to hold a person’s spirit after their death and were used to venerate them.

Yun was the first Catholic in Korea to be executed for his belief. Recently arrived priests from China and France also were killed. The 124 martyrs also include Augustine Jeong Yak-jong, a nobleman catechist considered the father of the church, and two married couples who consecrated their lives to God, living chaste lives.

In four other instances over the next 100 years, some 10,000 faithful were killed.

Father Chung said the beatification of the first 103 in the 1970s brought a surge in Catholicism in South Korea, where growth has been steady ever since. He expected another surge once these 124 are beatified.

“You look at their lives. It’s amazing how deep was their faith in God and how profoundly they lived their life of faith, hope and love in God,” he said. “It’s amazing what they have left us, and we need that. (The) Korean Catholic Church, we need that spirituality again to renew our faith.”

NEXT: Pope: Everyone must have more access to scientific knowledge, training