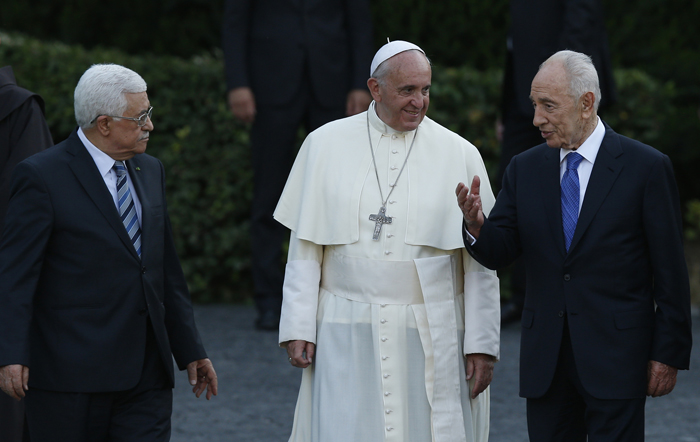 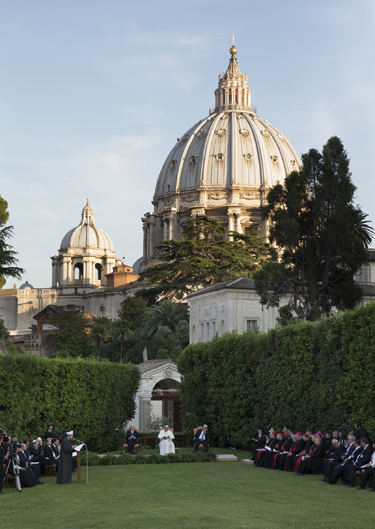 VATICAN CITY (CNS) — Praying for peace in the Holy Land alongside leaders of long-antagonistic nations, Pope Francis called on God to act where human efforts had failed, to end what he described as violence inspired by the devil.

“More than once we have been on the verge of peace, but the evil one, employing a variety of means, has succeeded in blocking it,” the pope said June 8 at an evening ceremony in the Vatican Gardens. “That is why we are here, because we know and we believe that we need the help of God.”

The pope addressed his remarks to Israeli President Shimon Peres and Palestinian President Mahmoud Abbas during an “invocation for peace” in the Holy Land, to which he had invited them during his visit to the region two weeks earlier.

“I was young, now I am old. I experienced war, I tasted peace,” Peres said in an English portion of his statement. “Never will I forget the bereaved families, parents and children, who paid the cost of war. And all my life I shall never stop to act for peace for the generations to come. Let’s all of us join hands and make it happen.”

According to an official translation of Abbas’ prepared Arabic text, the Palestinian president said: “We want peace for us and for our neighbors. We seek prosperity and peace of mind for ourselves and for others alike.”

(See a video of the visit below:)

The event, at which Christians, Muslims and Jews prayed in each other’s presence, was almost certainly the first of its kind at the Vatican, according to Jesuit Father Federico Lombardi, director of the Holy See Press Office.

The starting time of 7 p.m. had been chosen in part to avoid the midday heat, yet temperatures were still in the mid 80s less than an hour earlier, when Peres arrived by car at the Vatican guesthouse, where the pope lives. Abbas arrived at 6:30 p.m., and 15 minutes later the two presidents embraced in the presence of the pope.

“Nice to see you,” Peres and Abbas told each other in English.

Joining the group was Ecumenical Patriarch Bartholomew of Constantinople, whom Father Lombardi had described as one of the event’s “four protagonists,” and Franciscan Father Pierbattista Pizzaballa, custos of the Holy Land and the principal coordinator of the event.

The five men rode together in a white minivan the short distance to the site of the ceremony, a triangular swath of lawn walled off by tall hedges along two sides. The setting had been chosen, according to Father Lombardi, because of its “neutral” appearance, lacking in religious imagery.

Pope Francis and the two presidents sat at the corner of the triangle where the two hedges met.

Along the hedge to to their left sat what the Vatican described as “political” members of the Israeli and Palestinian delegations, including both nations’ ambassadors to the Holy See; Christian religious leaders, including Patriarch Bartholomew, Greek Orthodox Patriarch Theophilos III of Jerusalem and Palestinian Lutheran Bishop Monib Younan; and musicians who performed between prayers during the ceremony.

Along the other hedge sat various Muslim, Jewish and Druze religious figures, including Rabbi Abraham Skorka and Omar Abboud, longtime friends of the pope from Buenos Aires and leaders respectively in their city’s Jewish and Muslim communities, who accompanied Pope Francis during his visit to the Holy Land.

Members of the Palestinian and Israeli delegations and guests of Pope Francis read a selection of Jewish, Christian and Muslim prayers, in order of their religions’ historical precedence. Each set of prayers praised God for creation, begged forgiveness of sins and asked for peace in the Holy Land.

Patriarch Bartholomew read in English from the Book of Isaiah: “The wolf and the lamb shall feed together; the lion shall eat straw like the ox; but the serpent — its food shall be dust.”

At the end of the ceremony, which lasted about an hour and 45 minutes, the pope, patriarch and the two presidents kissed each other on both cheeks, then took up shovels and added dirt to the base of a newly planted olive tree. They then spent about 15 minutes speaking privately inside the nearby Casina Pio IV, a 16th-century villa which now houses several pontifical academies. 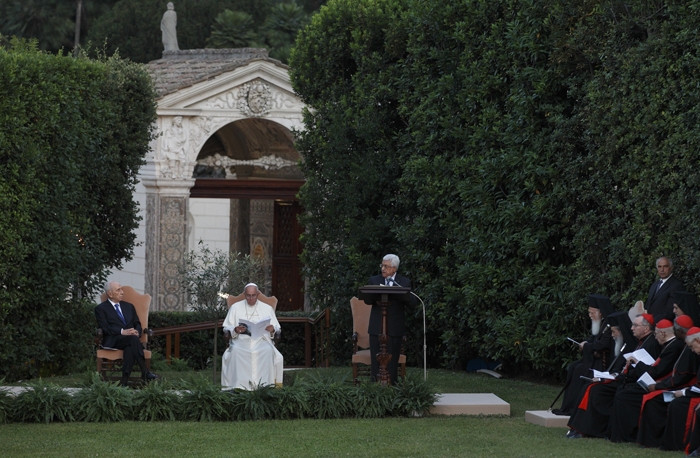