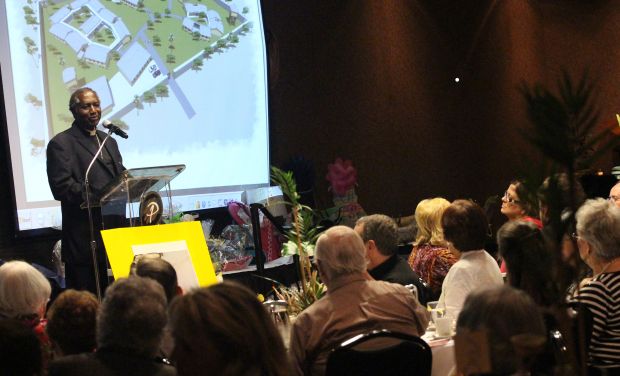 Archbishop Paul R. Ruzoka of Tabora, Tanzania, speaks at a May 13 fundraiser in Toledo, Ohio, sponsored by the Universal Initiative Foundation to raise money for a sanctuary for albino and other vulnerable children in Tanzania. (CNS photo/Laurie Stevens Bertke, Catholic Chronicle)

TOLEDO, Ohio (CNS) — Don and Gisela Stiles are on a mission to raise awareness of the plight of albino children who have been targeted in Tanzania by witch doctors for their body parts and subject to mutilation and slaughter in a wave of violent attacks.

As part of their crusade, the Toledo Catholic couple founded the nonprofit Universal Initiative Foundation and is raising money to build a sanctuary in the Archdiocese of Tabora, Tanzania, to protect hundreds of albino and other vulnerable children.

The sanctuary took a step closer to this spring as guests of a fundraising dinner in Maumee bid on items needed to construct and furnish the facility.

Archbishop Paul R. Ruzoka of Tabora was present to relay the urgency of the cause. He traveled to the Diocese of Toledo for two weeks in May to speak at the fundraiser and to other groups about the plight of albinos in Tanzania.

Though he had been to the United States previously, the archbishop said it was the first time he had traveled outside his country to highlight the growing problem of violence against albino people.

Tanzania has one of the highest rates of albinism in the world, with the congenital disorder affecting as many as one in 1,400. Since 2007, 76 people with albinism — a defect of melanin production that results in little or no color in the skin, hair and eyes — have been attacked and their body parts hacked off and sold to witch doctors, according to the Universal Initiative Foundation’s website, www.universalif.org. Only 14 victims survived the attacks.

While cultural taboos have long existed against albinos, Archbishop Ruzoka said the attacks are a recent development stemming from a boom in the mining and fishing industries.

“People of all walks of life are seeking fortunes, including witch doctors, who convince people that they have charms to make them get rich quickly,” he said. The witch doctors promise potions made from the body parts of albinos — particularly innocent children — will bring wealth and good fortune.

Another myth is the idea that having sex with an albino woman can cure AIDS.

“These witch doctors depend on the ignorance of people, coupled with the superstitions and myths surrounding people with albinism, causing great harm to the victims and fear among families and relatives if not the society at large,” Archbishop Ruzoka said.

Five acres of land have already been donated for the construction of a self-sustaining, secured facility to house and educate as many as 600 children and young adults. Residents would include those with albinism as well as non-affected children orphaned by AIDS or abandoned and neglected through poverty.

“We want to make it a home — a community of love for these children, and that can only be realized if they are mixed up with the other children,” Archbishop Ruzoka explained. “We need to empower them through a good education and to restore their human dignity.”

An Italian congregation of Missionaries of Charity has already sent sisters to oversee care of about 10 children who are housed on the property now. They have a convent and living quarters for the children, but the archbishop said they would like to accommodate more children and add a school on site.

He estimates $500,000 is needed to complete the first phase of the project, which includes a dormitory for 50 to 60 children, a kindergarten and primary school, kitchen and dining facilities, recreational facilities, an infirmary and water and energy installations. Future plans call for the sanctuary to house 600 children and young adults along with a secondary school and vocational training.

The state recognizes and is supportive of the archdiocese’s plans for the sanctuary and has promised assistance to ensure the program fits into the educational system, Archbishop Ruzoka noted.

Mrs. Stiles said the Universal Initiative Foundation was close to reaching its initial goal of raising $50,000 for the sanctuary.

Editor’s Note: Contributions may be made through www.universalif.org or by sending a check or money order, payable to the Universal Initiative Foundation, 1685 Lance Point Dr., Suite C, Maumee, OH 43537.

Stevens Bertke is staff writer and Web editor at the Catholic Chronicle, newspaper of the Diocese of Toledo.

NEXT: Irish government finalizes terms of inquiry into mother-baby homes