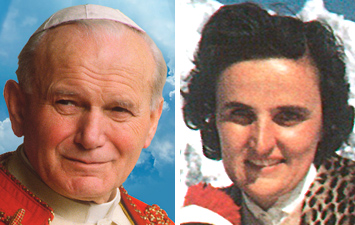 St. John Paul II and St. Gianna are the patron saints for the World Meeting of Families in Philadelphia next year, Archbishop Charles J. Chaput announced during the Sunday evening Mass July 20 at the Cathedral Basilica of SS. Peter and Paul. He made the announcement during the exposition of the first-class relic of St. John Paul II over the weekend at the cathedral.

St. John Paul is linked closely to Philadelphia as he became the first pope ever to visit the city. In 1979 he celebrated Mass on Logan Circle for nearly 1 million people. Fifteen years later he celebrated the first World Meeting of Families, which aimed to strengthen the bonds of family across the world.

At his canonization last spring at the Vatican, he was declared “the pope of the family.”

St. Gianna Beretta Molla was a pediatrician and mother of four who gave her life to bear her fourth child in 1962. She was beatified in 1994 — the year of the first World Meeting of Families — by St. John Paul and canonized by him in 2004.

She is the patron saint for mothers, physicians and unborn children.

“St. John Paul II and St. Gianna have been chosen as the two worthy patron saints to guide all in preparation and participation of this international event as they fully embody the history, mission and theme of the World Meeting of Families 2015,” said Archbishop Chaput.

The theme of the meeting is “Love is our mission: the family fully alive.”

The archbishop said the two saints “had a deep and abiding commitment to strengthening the family and sustaining it with love. This historic event will give thousands from around the globe the opportunity to share in the same commitment of our patron saints.”

To commemorate the announcement, Archbishop Chaput concluded Mass with a blessing of the relic of St. John Paul II asking for his heavenly intercession. The relic is of his blood, which remains in a liquid state.

PREVIOUS: Father Chuck’s memory lives on in homes built in his name

NEXT: Teaching the church’s care for people of all walks