Teaching the church’s care for people of all walks 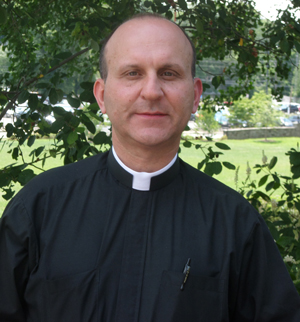 Father Paul Check, a priest of the Diocese of Bridgeport, Conn., is executive director of Courage International.

Father Paul Check, a priest of the Diocese of Bridgeport, Conn., is executive director of Courage International, a ministry to persons with same-sex inclinations who strive toward chaste living in accordance with the teaching of the Catholic Church.

Courage was founded in 1980 by Philadelphia-born Oblate of St. Francis de Sales Father John Harvey at the request of New York’s Cardinal Terence Cooke. Also part of the Courage ministry is EnCourage, a program designed to support parents, siblings, other relatives and friends of persons with same-sex attraction.

Q. How long have you been involved in this ministry?

A. Since I first met Father Harvey, which was in 2002. I was organizing a Theology on Tap program in a parish and I invited him to give a talk on homosexuality. A few weeks later I got a letter from my bishop (Bishop William E. Lori, now Archbishop of Baltimore) asking me to start a Courage chapter because we didn’t have one. I have been a local Courage chaplain since 2003 and in January 2008 I started my work as executive director.

Q. What does Courage do?

A. The best way to answer that is to go back to the origins of the apostolate. We consider our founder to be the Servant of God Terence Cardinal Cooke. At some point when he was the cardinal archbishop of New York he had the sense, I would even call it the charism, that the church, while it has to say no to homosexual activity, must have a very clear, particular and charitable yes to people who have same-sex attraction.

Q. How many members do you have at this point?

A. We do not keep membership rolls. We are probably in over half of the dioceses in the United States, over 100. We are international and I would say we are in a total of about 15 countries — Australia, New Zealand, Canada, throughout Mexico, parts of Central America, Rome and we are trying to get something started in France. Dioceses in Hong Kong and Singapore have invited me to give talks to their priests. The need is great and the interest in the apostolate is there.

Q.  Do people who join generally stick to it?

A.  Some do, some don’t; some come and go. I think that is one of the reasons it is not helpful to use the words gay, homosexual or lesbian as nouns. There is not one profile of persons we want to collapse into this ambiguous identity, one profile. I would say people’s identity to the apostolate depends on their needs and their interest in not only the church’s teaching but in pastoral care.

Q. I was struck by the wide range of ages at the conference. Is this usual?

A. Yes, it is 18 and up. Younger, middle aged, older; married, single. There are also a number of priests here who are interested in ministry to people with same-sex attraction.

Q. The perception about people with same-sex attraction has changed in the last decade or so. Has the church’s perception changed also to a certain extent?

A. The underlying truths of how the church understands the human person has not changed and can never change. The reason for that is human nature is created in the image and likeness of the Divine Essence. Because God doesn’t change, we can’t change. Now I think there is a greater awareness on the part of the visible church to the reality that many people consider themselves to be gay, homosexual or lesbian as a defining aspect of their humanity. So the church is concerned with material care and wants to reach out and say, “Let’s see if we can help you build a relationship with Jesus Christ and from that help you to understand yourself better.”

Q. You do meet some resistance from many people with same-sex attractions. How are you trying to explain the church position to them?

A. Years ago when I first started in this apostolate Father Harvey told me that the best ambassadors are our members. While my job is going around to different dioceses and seminaries giving talks on the topic of homosexuality, I always make sure I have one of our members along because they have the lived experience and they put a face on the question. In that sense they are more compelling witnesses to the truth of the church’s teaching than I am.

A. No, it goes back to nearly the beginning of the ministry. It is for parents or loved ones who have a child or sibling living a homosexual life. The needs are great and growing in percentages even greater than Courage. Parents are often living in turmoil about what to do and where to go. They also have fear about whether they were good parents or bad parents; did they do something to cause the difficulty in the lives of their children? The church is very eager to give them the reassurance that grace will help, give them peace.

Q. I was surprised to learn most EnCourage parents here do not have a child in Courage. Is that the general case?

A. That would be the norm typically. If the parents and child are working together we must still help them. Often it is the issue of homosexuality that divides the parents from the child, and the parents seek assistance from EnCourage.

Q. Does the church reach out to the mainstream community to reduce prejudice?

A. We are trying to use modern media to reach people. We have a website with a documentary that features some of our members telling their story. We are working on a book of testimonials. We have a five-part catechetical series. I think these are ways we are reaching out.

Q. Are there any other points you would like to make?

A. It is regrettable that many people think the Catholic Church hates gay people. The Catholic Church, after the example of Jesus, doesn’t hate anyone. Like a good mother she knows there are many things that are potentially dangerous and harmful to her children. Not just children in the sense of age, but the children of God. So when she is saying no to behavior and actions she considers harmful to humans we call them sins. But the church is always very careful to distinguish sinful behavior from the person. Our Lord did that.

Q. How should anyone get in touch with you?

A. Through our website couragerc.org (and) the “rc” stands for Roman Catholic. We do get some people who are not Catholic and we certainly want to help them as long as they understand the goals of Courage and are willing to respect them.

NEXT: People with same-sex attraction take Courage at conference