Archeparchy to invite families persecuted for faith to 2015 gathering 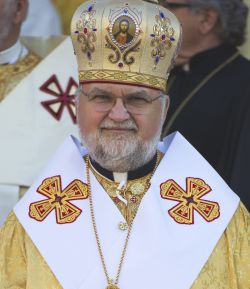 PHILADELPHIA (CNS) — Archbishop Stefan Soroka of the Ukrainian Archeparchy of Philadelphia plans to invite families who have endured religious persecution to attend the World Meeting of Families being held in Philadelphia in September 2015.

“The Ukrainian Catholic Church has experienced religious persecution for centuries and from this experience, it is our concern that those suffering for the faith be represented at this important gathering and that their voices be heard,” Archbishop Soroka said in a statement.

Planning is moving ahead on many levels for the international gathering of families, which is sponsored by the Vatican’s Pontifical Council for the Family every three years in a different city.

The Philadelphia Archdiocese, headed by Archbishop Charles J. Chaput, is hosting the meeting. The event co-chairmen are Pennsylvania Gov. Tom Corbett and Philadelphia Mayor Michael Nutter. At a May news conference, Archbishop Chaput unveiled the theme of the Sept. 22-27, 2015, meeting: “Love Is Our Mission: The Family Fully Alive.”

Organizers have high hopes Pope Francis will attend and the meeting is being planned as though he will. But Archbishop Chaput has emphasized he does not expect the pope to announce whether he will come to Philadelphia until about March of next year.

In a statement released July 2, Archbishop Soroka said that by helping families who have suffered for their religious faith get to Philadelphia in 2015, his goal “is to give voice to these voiceless, to enable them to give witness of their persecution, to let their story be told, especially the impact this suffering and persecution has had on their families.”

He said that since November 2013 the world has witnessed the ongoing persecution of Eastern Catholics in Ukraine as various church leaders and laypeople have sought democratic reforms and basic human rights including freedom of religion for their nation.

Months of protest and confrontation resulted in the February ouster of President Viktor Yanukovych and the May election of President Petro Poroshenko.

In March Russia occupied and annexed the Ukrainian region of Crimea. In April violence erupted in eastern Ukraine as separatists declared independence following the annexation, which the U.S. and the European Union have condemned as an illegal land grab. Amid the turmoil Catholics especially have reported religious persecution.

“I have heard firsthand accounts from bishops, clergy and faithful of the threats and intimidation they have experienced at the hands of those who would deny them freedom to practice their Ukrainian Greek Catholic faith,” Archbishop Soroka said.

Since the late 16th century, the archbishop noted, the Ukrainian Catholic Church “has lived through tremendous suffering, while giving Christian witness, first under the tsars and in the 20th century under Soviet communism.”

Beyond Ukraine, Archbishop Soroka continued, “religious persecution continues unabated worldwide — in Eastern Europe, China, the Middle East, in Africa — almost every corner of the world. Often the story of those persecuted is untold.”

NEXT: Congress fleshes out thinking on Theology of the Body