Congress fleshes out thinking on Theology of the Body 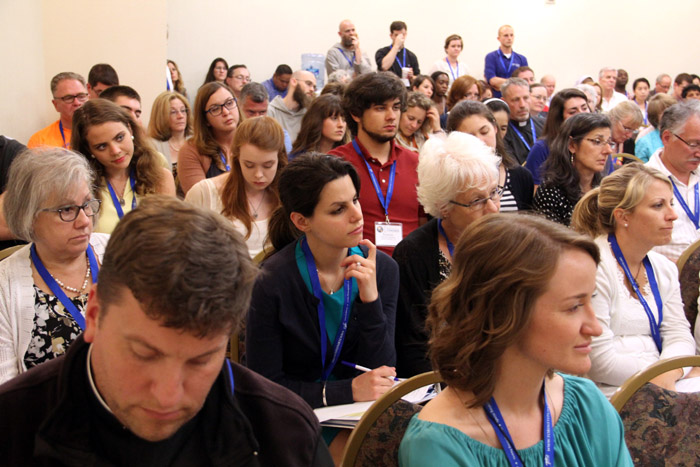 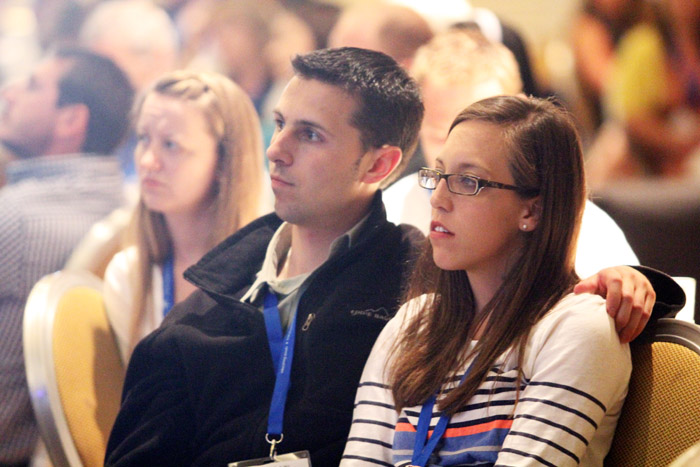 Pope St. John Paul II died nine years ago, but his teachings on Theology of the Body (TOB) are alive and well.

(See a photo gallery with dozens of images from the congress and watch a video by CatholicPhilly.com photographer Sarah Webb.)

The last congress had about 450 attending, and this year there were more than 700, according to the institute’s executive director Damon C. Owens.

“We are very pleased,” he said. “We have 40 states represented, a dozen countries and more than 50 dioceses, and at least 120 priests and religious.”

The TOB Institute is a nonprofit educational organization that bases its programs on the 129 short talks given by Pope John Paul II between 1979 and 1984 on what it means to be created male and female in the image and likeness of God.

In a welcoming message, Archbishop of Philadelphia Charles Chaput, who is chairman of the TOB Institute’s episcopal advisory board, complimented the organization for “the courses it offers, the lives and marriages it changes for the better and its deep fidelity to the thought of Pope John Paul II.”

The popularity of this year’s congress may have been influenced by the caliber of the general keynote speakers and breakout session speakers and leaders.

Major talks were given by Dr. Deborah Savage of St. Thomas University in St. Paul, Minn.; Bishop Jean Laffitte, secretary of the Pontifical Council for the Family; Damon Owens; Father Michael Gaitley of the Association of Marian Helpers; Dr. Janet Smith of St. Charles Borromeo Seminary in Wynnewood; and Christopher West, a popular lecturer with the Theology of the Body Institute.

“Be fruitful and multiply cannot be seen as a categorical obligation, an order,” Bishop Laffitte said. “It is a blessing which opens the heart of the spouses to the gift, the joy of life.” Quoting from Pope Benedict XVI he said, “The transmission of the faith from one generation to the next comes in a natural form in the family.”

Bishop Laffitte was introduced to the conference by Donna Farrell, the former communications director for the Archdiocese of Philadelphia who is now the executive director for the World Meeting of Families.

In her own remarks, Farrell said, “what better place to welcome the World Meeting of Families than Philadelphia, the birthplace of religious freedom? We will be welcoming families from around the world.” 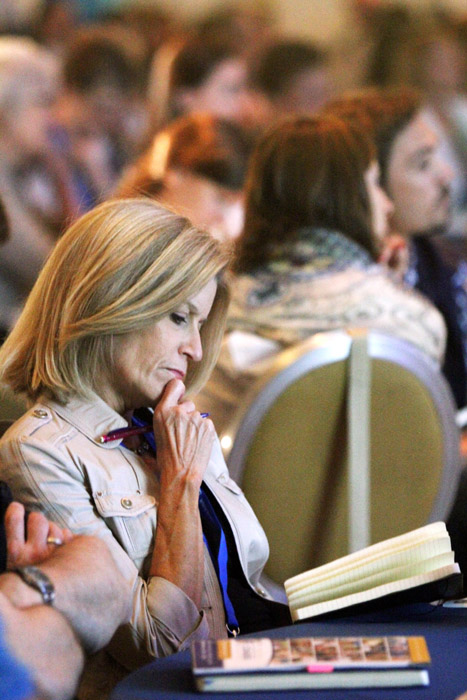 Debbie Staresinic from Cincinnati, Ohio, reflects on the keynote address by Dr. Deborah Savage on “Complementarity as Mission: Man, Woman and the Culture of Life” July 9.

Bill Donaghy, who lectures nationally and internationally on the Theology of the Body, chose as his topic “TOB and the Way of Beauty: The Art of the New Evangelization.” Emphasizing the beauty of all things, beginning with images of flowers, leaves, rivers, mountains and lakes, he segued into Adam and Eve, and humanity in general.

“Pope John Paul II talked about the way of beauty and he saw the culmination of the beauty of all things in the human person,” Donaghy said. “In sexuality you can see the image of God.”

When the discussion is love and marriage, perhaps the real experts are those who have been there, done that. Peter Damgaard-Hansen, who came from Denmark, chose as his topic, “’It is Not Good for Man to be Alone’ — But it is Not Easy for Man to be With Someone Either.”

In his practice as a psychologist he does integrative counseling, which is an understanding that a person’s mental, physical and spiritual dimensions are intertwined. A married convert to Catholicism, he observed, “TOB best speaks to the heart and the intellect. You can argue for it on a rational level.”

Not all of the conferences concerned relations between wife and husband; family has many meanings.

For example Janet Smith’s talk, “Theology and the Old Body” addressed another issue – her personal experience as caregiver to her beloved mother who has dementia, an experience shared by many others and similarly shared by many caregivers to people with various disabilities.

Of course in the end, conferences are only as good as what people take away from them.

“The speakers enriched my experience of the Theology of the Body,” said Ruthie Greenhalgh of St. Anthony Parish, Ambler. “Theology of the Body gives us a better understanding of human beings and our faith as they relate to each other.”

Tim Flanagan, the founder of Wayne-based Catholic Leadership Institute, was not a presenter at the Congress but just dropped in for some of the sessions.

“Theology of the Body is an opportunity for spiritual growth and spiritual formation,” he said. “If you just walk around and see all of the information at the vendors’ tables, you will see there is a lot of good information out there that will help people.”

PREVIOUS: Archeparchy to invite families persecuted for faith to 2015 gathering

NEXT: Inn Dwelling: Rehabbing homes and turning around lives in Germantown