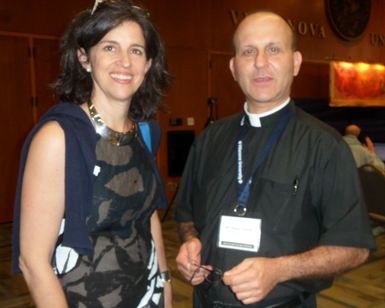 Helen Alvare stands with Father Paul Check, executive director of Courage International, after her talk at the Courage/EnCourage conference July 18 at Villanova University.

When Helen Alvaré spoke at the Courage/EnCourage Conference at Villanova University on July 18 it was a return to her roots.

Now a professor at George Mason University School of Law in Virginia, she earned her undergraduate degree at Villanova where she helped to make history by spearheading a successful drive for equal funding for women in extracurricular programs, a noble effort not well received by some of her male classmates.

While all of this on the surface would seem to have little to do with the mission of Courage/EnCourage, which deals with the challenge of same-sex attraction, all the changes in the culture on sexual issues stem from the “idea that our very freedom, our personhood, our identity trace to our sexual inclination and expression,” Alvaré said.

She traced these changes through debates and legal decisions that have led to a culture where we now promote “sex without the burden of children.”

Alvaré chose to title her talk, “What if We Took Pope Francis at His Word?” She was referring to Pope Francis’ famous retort in July 2013 when he was questioned by a reporter specifically on homosexuality in the clergy. The pope’s response was, “A gay person who is seeking God, who is of good will, who am I to judge him?”

“Pope Francis in his statements invites us so much in the last two years to look at the person that we meet, no matter that person’s, background, inclinations, tastes, acts whatever,” she said. “If they accept the Lord and have good will, they should not be marginalized. He also encouraged us to think of the church as a hospital for the sick.”

Alvaré herself has been one of the most effective messengers for the teachings of the church on marriage and the family, but she too has had inner struggles.

She remembers at the young age of 12 questioning her mother who graduated from university at the top of her class but after marriage settled down to the role of wife and eventual mother of five.

“What are you doing here? You could have been something,” she asked accusingly.

“I am something, shut up.” Her mother snapped back.

Alvaré, now a mother of three, also remembers her own trepidation and doubts about becoming a mother, something that would seriously alter her busy career. “I was afraid to have children,” she said.

The teachings of the church are wonderful, but not always easily grasped. “We have this brilliant instruction, Theology of the Body. I know it is difficult and can be technical, but it is incredibly prophetic,” she said.

As Alvaré counseled women who were post-abortive she discovered the way to begin was by sharing her own brokenness and struggles with them. “In my case, my own failings were a way to open the door,” she said.

NEXT: Archbishop Chaput says pope will visit Philadelphia in September 2015