More than 350 men and women gathered at Villanova University July 17-19 for the Courage/EnCourage Conference 2014. The group encourages Catholics with same-sex attraction to live in chastity in accordance with Catholic teachings and gives moral support to them and also to parents and others who have a loved one with same-sex attraction, through the group EnCourage.

It was the largest gathering of the group since, well, the last time they met in the Philadelphia area, in 2009.

The theme for the Courage conference was “Move beyond the confines of the homosexual label to a more complete identity in Christ,” according to its website.

The Gospel reading for the July 17 Mass that opened the conference included the passage from Matthew 11:30 in which Jesus tells his disciples, “My yoke is easy, and my burden light.”

Archbishop Charles Chaput, who celebrated the opening liturgy, spoke of the challenge of doing what is right even when we know it is difficult to do it. It doesn’t stop being a responsibility and a burden, but because we carry it with the Lord it is lighter as result, he explained. 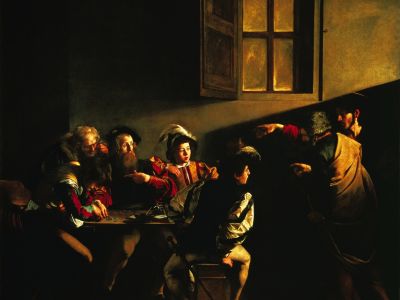 A Caravaggio painting titled “The Calling of Saint Matthew” was featured as a meditation at the Courage/EnCourage Conference. Read more about it at the website of Courage International.

Art work for the conference featured Caravaggio’s Jesus calling of St. Matthew to discipleship. Perhaps this is appropriate in that Matthew was a tax collector, a sinner if there ever was, from the viewpoint of most Jews in Roman occupied Judea.

Interestingly, Caravaggio did not say which man in the scene was Matthew; the painting can be a metaphor for anyone tempted by sinful behavior.

The popularity of the conference could have more to do with the quality of the speakers than the location. Major speakers included Helen Alvaré, a professor of law at George Mason University; Dominican Father Dominic Brent, assistant professor of philosophy at the Catholic University of America and a popular retreat master; Immaculée Ilibagiza, a survivor of the infamous Rwanda massacre in 1994 who found the power to forgive through prayer; and Father Paul Check, the executive director for Courage International.

A local speaker of note was Father Philip Bochanski, C.O., who is the chaplain for the Philadelphia Courage group, of which about 10 members were at the conference.

Father Bochanski’s talk, “Namumgongo Jubilees,” focused on St. Charles Lwanga and his companions, who in the 1880s were brutally executed by the king of Rwanda because they would not engage in homosexual activity with him.

“They are our patron saints; they were challenging the king and many of his courtiers by not performing homosexual acts,” Father Bochanski said. “They were martyrs for chastity.”

Attendees received a prayer that also appeared on the conference website’s registration page, to which visitors were invited to pray in preparation for the conference: “Lord Jesus, I consecrate my sexuality to you; cleanse my mind, my memory, my imagination and my dreams of all disordered content. Grant me the gift of chastity, to bring my sexual drive into subjection of your Holy Spirit dwelling within me. If there be any dividedness in my heart in this regard, please make my heart pure and simple.

“Guard my weakness by your Holy Cross through the intercession of your Mother Mary, my guardian angel, St. Charles Lwanga, and the communion of saints. Amen.”

Among the Philadelphia members was “Carl,” who gave member testimony at a pastoral seminar for priests led by Father Check.

“I talked about the challenge of trying to do what we know is right even if we know it is difficult to do,” Carl said. “The Gospel reading ‘his yoke is easy,’ doesn’t stop it from being a responsibility and a burden, but because we carry it with the Lord it is easier.”

In from Ohio along with her husband was “Maryanne” and they were attending as members of EnCourage.

“Listening to the witnesses gives me hope,” Maryanne said. “Because of their witness, because of their struggle, they give me encouragement for my son, even though he doesn’t know we are here.”

PREVIOUS: Teaching the church’s care for people of all walks

NEXT: Rwanda genocide survivor tells story of prayer and forgiveness