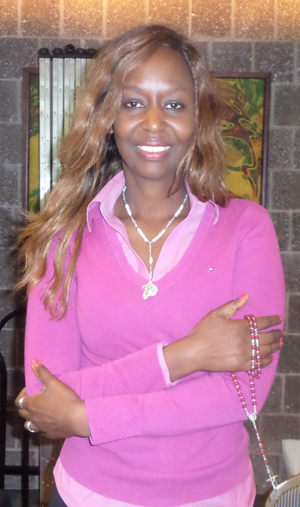 Immaculée Ilibagiza, who spoke on July 18 at the Courage/EnCourage Conference held at Villanova University, had a three-fold message that she has told to many audiences: pray, especially the rosary; if you do that God will help you; and above all, no matter what, forgive.

Born in 1972 in Rwanda, she was a young Catholic Tutsi woman in 1994 when tribal hatred between the ruling Hutus and minority Tutsis boiled over into outright government-sanctioned genocide, resulting in a death toll estimated anywhere from 500,000 to 1,000,000 people – men, women and children.

As the situation worsened, her father feared for her safety and sent her to a Hutu friend who was a Protestant pastor. The pastor, without telling his own family, hid her in a tiny unused bathroom, which she estimates was three by four feet, in his house until order could be restored.

The space was so tiny she could not imagine how she could stand it, then the pastor brought five more women and finally two more. They had water, and the pastor would quietly bring them some food, at least enough to live on, but they could not talk for fear they would be heard and could only flush the toilet when the other toilet in the house was flushed.

“After a while I thought I would die,” Immaculée recalls, and she was seething with anger against those who were persecuting her people.

Although she felt abandoned she began to pray, and doubly so when the government ordered a house-to-house search of the village, killing every Tutsi they could find.

“If you don’t let them find us, I will never doubt you again and I will turn my life around,” she prayed. Every room of the house was searched even the roof as a gang of Hutus surrounded the building lest anyone escape by a window.

Somehow when a searcher came to the locked bathroom door he just passed it by, to the relief of the pastor.

“I don’t know what happened, but if you were praying, keep praying,” he afterwards told the women.

Immaculée needed no encouragement. She discovered when she prayed her anger would subside but would return if she stopped. In the end she was praying from 6 a.m. until 10 p.m. when she would fall asleep. She estimates she prayed 27 rosaries daily, supplemented by the chaplet of divine mercy.
The only sticking point was the phrase in the Our Father, “forgive us our trespasses as we forgive those who trespass against us.” How could she forgive these men who were killing her people and would kill her given a chance? She compromised by skipping that part of the prayer.

Finally, an inner voice reminded her of the dying words of Jesus, “Father, forgive them, they know not what they do.” Grudgingly she conceded she must do likewise and in praying the full prayer she found true peace.

She and her companions spent 91 days in the little bathroom, until their protector deemed it safe for them to come out. She was devastated to find that her mother and father, two of her three brothers, her grandparents, aunts and uncles had all been murdered. Their house and all of their possessions were gone.

She was determined not to forget the lessons God taught her in that tiny bathroom. A final test came when she was given a chance to visit a prison and confront one of the men who murdered members of her family. When she did, she simply told him she forgave him and truly meant it.

Now an American citizen, her vocation is to travel around to tell people, no matter what their trials or affliction, that they must pray, have faith and above all learn to forgive.