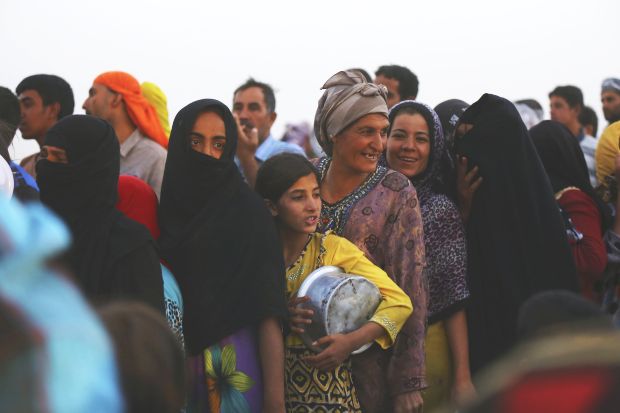 Iraqi refugees line up to receive free food inside the Khazer camp on the outskirts of Irbil, Iraq, June 29. (CNS photo/Stringer, Reuters)

NEW YORK (CNS) — A U.S.-based international Catholic agency July 28 issued a plea for emergency funds to help tens of thousands of Christians forced to flee their homes in the northern Iraqi city of Mosul.

“These Christian families have arrived with only their clothes, having been forced to leave everything behind in Mosul,” said Ra’ed Bahou, who is the Catholic Near East Welfare Association’s regional director for Jordan and Iraq. As families were “fleeing the city on foot,” he said, “ISIS militants then stole whatever dollars they had in their pockets, even their passports and identification papers.”

Bahou made the comments in a news release from CNEWA announcing the agency has launched a campaign to rush funds to the families.

Islamic militants known as ISIS, or the Islamic State fighters, have solidified their control over Iraq’s second-largest city of Mosul by imposing Shariah, Islamic law, and are ordering Christians to convert or pay a special tax or they will die.

Mosul’s Christians have instead fled to the Christian villages of Ninevah province — some just a few miles from Mosul — or to the autonomous Kurdistan region in northern Iraq.

An agency of the Holy See, CNEWA works throughout the Middle East, with offices in Amman, Jordan, Beirut and Jerusalem. It has been active in Iraq for more than 50 years, but redoubled its efforts among the vulnerable Christian population in 1991.

According to Bahou, Christian families have found refuge in churches, convents and monasteries, he added.

Syriac Catholic Archbishop Yohanna Moshe of Mosul and the Dominican Sisters of St. Catherine of Siena — themselves homeless — the clergy, religious and villagers are trying to provide the basics, said the CNEWA release. It said refuge, especially in the villages of Alqosh, Bakhdida (Qaraqosh), Bartella and Tel Kaif, is “tenuous at best,” because the Islamic State has cut the electricity and water supply, and has announced its intentions to overrun the region.

“These villages are in the hands of God,” Bahou said, “as ISIS says their next ‘gift’ will be the villages of the Ninevah Plain.”

Msgr. John E. Kozar, who is president of CNEWA, said the agency will get the emergency funds to the bishops, clergy and religious, “who in the frenzy are courageously providing water, food, mattresses and medicines” to fleeing Christians.

The world is “witnessing, at the hands of extremist thugs, the eradication of a cradle of Christianity in the cradle of civilization,” the priest said in a statement.

He added that the agency will help the “shepherds of this flock to tend their sheep, with the basics they need for survival now … even if their flock is dispersed.”

The BBC reported July 28 that in a joint message, France’s foreign minister and interior minister have offered Iraqi Christians asylum. “We are ready, if they so desire, to help facilitate asylum on our territory,” their statement said.

PREVIOUS: The Tekakwitha Conference at 75: a look at key events in its history

NEXT: Report shows rising number of people displaced because of faith in 2013