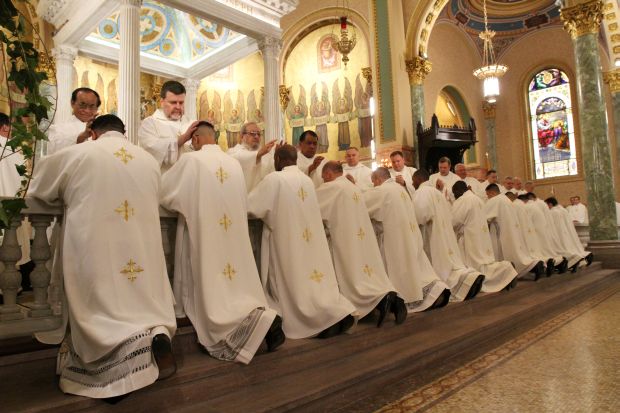 Priests lay hands on candidates during their ordination at the Co-Cathedral of St. Joseph in Brooklyn, N.Y., June 28. Bishop Nicholas DiMarzio of Brooklyn ordained 13 men to the priesthood during the Mass, marking the largest ordination class for a U.S. diocese this year. (CNS photo/Gregory A. Shemitz)

Five bishops and about 200 priests were present for the celebration of priesthood, and more than 1,500 people comprised the standing-room-only congregation.

“In the Diocese of Brooklyn, we are so blessed that 13 men will be called for service to the people of God,” the bishop said. “Some may think that 13 is an unlucky number. For me, however, 13 is a baker’s dozen, a true abundance of harvest that the Lord has promised to those who pray for laborers to enter the harvest.”

Some in the back of the church did not have a great seat for viewing, so they used their mobile devices to log on to NET-TV, making it the most popular hit on the NET website for the weekend. The Catholic network is part of DeSales Media Group, the communications arm of the Brooklyn Diocese. Following the Mass, which lasted more than two hours, the church remained full as the newly ordained came back to bestow their first blessings on family and friends. After their ordination ceremony, they were given their pastoral assignments.

They will serve the multicultural communities of Brooklyn, known as “the diocese of immigrants.”

Bishop DiMarzio said the priest class of 2014 represented a landmark group. Most of them are sons of immigrants and represent a moment when the newest immigrants to the diocese are making their mark on the diocesan clergy.

Of the 13 new priests, five were foreign born. Two were born in Poland, two in Haiti and one in Italy. Three are from Brooklyn, two from Queens, one from Manhattan and one from Philadelphia. The eight born in the U.S. came from parents born in the Dominican Republic, Ecuador, Puerto Rico, Nicaragua, Cuba and Haiti.

While the diocese has done a great job recruiting and educating these men, Bishop DiMarzio said that it cannot rest on its laurels. Some of the seminary classes in preparation for the priesthood contain single-digit totals. In response, the bishop has set up a new structure for inviting men to consider priesthood as a vocation.

Contributing to this was Ed Wilkinson, editor of The Tablet, Brooklyn’s diocesan newspaper.