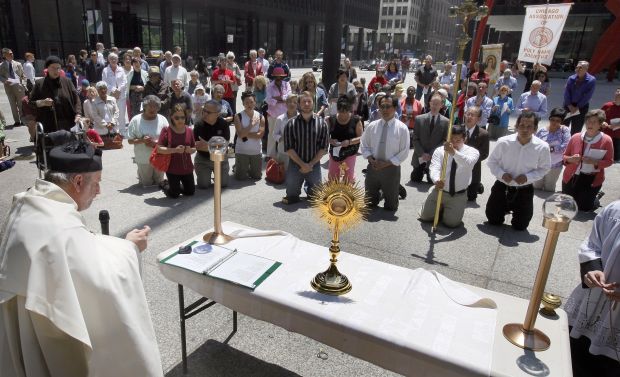 WASHINGTON (CNS) — In the nation’s capital and across the country, Catholics gathered to mark the end of the Fortnight for Freedom observance that calls them to celebrate religious freedom and grow in awareness of efforts the Catholic Church sees as threats to that freedom, chief among them the federal government’s contraceptive mandate.

The U.S. Conference of Catholic Bishops has organized the fortnight campaign for the past three years. This year’s theme emphasized the freedom to serve.

“For me this is almost like a catechesis, as well as social advocacy, but it is also faith formation,” Mary Sturm of St. Gregory Parish in Fort Lauderdale, Florida, said of the annual observance. “People have to be taught about what is going on.”

The parish has featured speakers and voter registration drives as part of its public awareness campaign. Sturm, a graduate of the Miami archdiocesan lay ministry program, helped organize a July 3 eucharistic Holy Hour closing ceremony for the fortnight. It was led by Father Eliseus Ezeuchenne.

“This is just not a fortnight event though it culminates on the Fourth of July — it should be 365 days a year that we are talking about this,” Sturm added.

Catholics knelt in prayer at St. Gregory to give thanks for their American freedoms. They also prayed that lawmakers and the courts would offer needed relief from ongoing threats against religious liberties impacting church entities.

Across the country in Oregon, Archbishop Alexander K. Sample urged Catholics at the Portland Archdiocese’s 39th annual “Freedom Mass” to be stalwarts for religious liberty.

“The greatest liberty that we enjoy is religious liberty,” said the archbishop during his homily. “It is something we should never take for granted.” He told the more than 5,000 Massgoers to “remain vigilant” and attentive in their understanding of religious liberty and to fight for the right “to live out and practice our faith in our daily lives as well as in our churches.”

The Mass, held near Independence Day since 1975, is organized by Portland’s Vietnamese Catholics. Many in the older generation escaped persecution in their native land because of the communist regime’s antipathy toward Catholicism in the post-Vietnam War years. Representatives from the Laotian/Hmong, Filipino, Polish and Eritrean communities also attend the Mass.

In the Midwest, red, white and blue greeted St. Louis Catholics on the front steps of the Cathedral Basilica of St. Louis a little before noon July 2.

On an unusually pleasant St. Louis summer day, the Stars and Stripes waved in the wind, with members of LIFE Runners holding the flag, as churchgoers signed a banner that read “Defend Religious Liberty.”

Archbishop Robert J. Carlson of St. Louis was the celebrant and homilist of a special Mass.

In his homily, he referred to the federal contraceptive mandate and said Americans must be on guard for further intrusions into their religious liberty. “The truth is we need to protect religious freedom today more than ever,” he said.

“We cannot accept the culture’s way of thinking as it is self-focused, truth is whatever you believe and often anti-Catholic and anti-human,” he said in his homily. “We need to pray — and ask the question of our culture — does this work, what you are proposing, in the shadow of heaven?”

In the Chicago Archdiocese, among other events, a Mass and eucharistic procession through downtown Chicago June 25 marked the fortnight. Participants also prayed a rosary for religious freedom before the Blessed Sacrament.

Writing in his column in the Catholic New World, the archdiocesan newspaper, Chicago Cardinal Francis E. George said: “In this country, we do not fear being killed for our faith. What, then, are we afraid of? We are afraid that the institutions that perform the works of mercy that have been integral to the church’s mission for centuries will be forced to become, effectively, government institutions, given permission to exist only if they do not act as Catholic.

“At stake also is a society that once permitted many different voices and faiths to contribute to the common good without compromising their collective conscience.”

Bishop Richard G. Lennon of Cleveland celebrated a closing Mass July 4 at the Cathedral of St. John the Evangelist.

In his homily and writings for the Catholic Universe Bulletin, the diocesan newspaper, Bishop Lennon noted the difference between the freedom of religion and the freedom of worship.

“What our Founding Fathers established by speaking about religious freedom was much broader than worship. Certainly, religious freedom embraces worship as well as many other aspects of life,” he said. “Religious freedom up to these last few years preserved a legitimate place for religions to care for the needy, to feed the hungry, to shelter the homeless and to do many other things for the good of fellow Americans.”

The Obama administration has emphasized “freedom of worship,” not freedom of religion, in exempting houses of worship from its employer contraceptive mandate, but not exempting most Catholic and other religious employers.

Just days before the fortnight officially came to a close July 4, the U.S. Supreme Court ruled that closely held companies cannot be required to cover contraceptives and abortion-inducing drugs in employee health plans. The Christian families who run the for-profit companies Hobby Lobby and Conestoga Hobby sued over the contraceptive mandate on religious grounds.

The fortnight opened June 21 with a Mass celebrated in Baltimore by Archbishop William E. Lori, chairman of the U.S. bishops’ Ad Hoc Committee for Religious Liberty.

In Washington, hundreds gathered at the Basilica of the National Shrine of the Immaculate Conception for the national closing Mass. Cardinal Donald W. Wuerl of Washington was the principal celebrant; Archbishop Joseph E. Kurtz of Louisville, Kentucky, was the homilist.

Before the Mass began, Cardinal Wuerl spoke of two recent Masses that commemorated the origins of religious liberty in America.

“In the midst of this year’s fortnight, I celebrated two Masses at the reconstructed Brick Chapel in historic St. Mary’s City and on St. Clement’s Island,” he said. “It was at these two historic sites where the first Catholic settlers arrived and established a community that was the birthplace of religious freedom in this part of the world.”

“These two sites stand today as reminders of the enduring American value of religious freedom as well as the fragile nature of that freedom and how it easily it can be compromised,” Cardinal Wuerl said.

These two Masses, he concluded, were “a visible, tangible testimony to an inalienable right — our inherent human right to religious liberty and the blessing of freedom of conscience.”

Contributing to this story were Tom Tracy in Fort Lauderdale, Jon DeBellis in Portland, Dave Luecking in St,. Louis, Michelle Martin in Chicago and Sarah Hinds in Washington.

NEXT: Members of media give perspectives on migration issues at conference