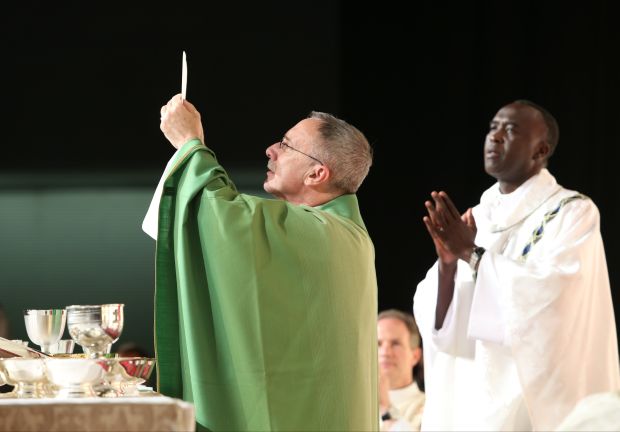 Auxiliary Bishop Luis R. Zarama of Atlanta elevates the host June 20 as Bishop Dominic Kimengich of Lodwar, Kenya, joins him on the altar during the opening Mass of the Eucharistic Congress in College Park, Ga. (CNS photo/Michael Alexander, Georgia Bulletin)

Jesus found would-be disciples sitting at a well, at a tax collector’s table, on the road to Damascus, “in the most ordinary places of his time,” he said.

Today, they might be “under the city overpasses or standing in soup lines, in prisons where they may languish under perhaps well-deserved punishment, but with hope,” Atlanta’s archbishop said, “or in high-rise office buildings.”

“These are those who we must invite into discipleship,” Archbishop Gregory said in his homily at the June 21 closing Mass of the congress.

Traditionally the largest annual gathering of Catholics in the Southeast, the congress drew an estimated 25,000 people and centered on the call of Jesus to “Go and make disciples of all nations.”

Held June 20-21 at the Georgia International Convention Center, the family gathering of Catholics from the Atlanta Archdiocese and beyond included addresses by national speakers in several languages, a eucharistic procession, adoration of the Blessed Sacrament, music and fellowship, and a healing service.

At an adjacent hotel several hundred young adults enjoyed a track called “Revive!” with praise and worship, adoration and a talk by Father Dave Dwyer, a Paulist priest who directs online and radio ministries.

“We do not so much instruct others as we need to witness to our faith,” Archbishop Gregory said in his homily at the closing Mass. “The way we attend to the poor. The way we look out for the little ones. We entice people into faith as Jesus himself did for the crowds who saw him in action.”

“Our faith is a great and matchless treasure — one which needs to be spread far and wide — and renewed in the hearts of those whose faith may have grown weak,” he said.

The day began with young and old from across the archdiocese gathering outside the convention center to form a eucharistic procession. They represented most of the Atlanta Archdiocese’s 100 parishes and missions, its schools and ministries, and a variety of ethnic cultures. 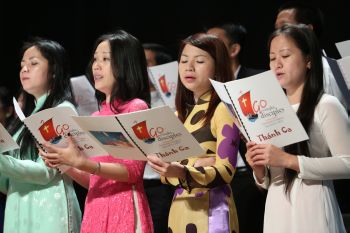 Parish groups, schools, ministries and religious congregations were identified by their respective banners. The crowd grew quiet and knelt as Archbishop Gregory came out to lead the procession, holding a large monstrance with the Blessed Sacrament.

Choirs from Our Lady of Vietnam Church in Riverdale and Queen of Angels School in Roswell sang as those seated inside a hall set up with 10,000 chairs awaited the arrival of the procession.

In reflecting on the theme of discipleship, he talked of moving from the center out to the peripheries.

“The center is always Christ,” he said. “Pope Francis reminds us, from the center we go out.”

Atlanta, Cardinal DiNardo said, is always poised to go and teach the nations, which is the aim of the congress.

“We have to make the good news vivid and significant for all,” he said. “We’re supposed to be a good virus. People want to catch us.”

Disciples must themselves be in “intimate” friendship with the Lord through eucharistic adoration so that they may take Christ to others, he said.

He singled out catechists as heroic disciples and applauded their efforts.

“Nothing is more brilliant or more scary than to get up in front of a group of young people and try to teach the words of Jesus,” he said. “You are the infantry people, the front lines.”

Tracks were offered in English, Spanish, Vietnamese and American Sign Language, and there was a track and for children. 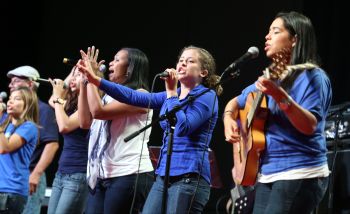 Nearly 60 exhibitors participated in the congress, offering items for sale from prayer pillowcases to religious jewelry. Some exhibitors were on hand to promote ministries or programs such as the Pregnancy Aid Clinic and Catholic Relief Services, the U.S. bishops’ overseas relief and development agency.

Attendees also could visit the adoration chapel, where the Blessed Sacrament was exposed, to spend time in quiet prayer and to leave prayer requests in writing.

For Erin Kline, the congress is a spiritual revitalization, said the parishioner of Prince of Peace Church.

“I love the congress — everything about it — being able to see everybody and reconnecting with God. I have a hard time with that at times. Being with him and feeling such peace and connection is why I continue coming back,” Kline told The Georgia Bulletin, newspaper of the Atlanta Archdiocese.

Ginia Taylor, a parishioner at St. Thomas More Church in Decatur, has been coming to the congress for 10 years, since she was 14 years old.

“What I love about it is the sheer number of people who are here,” said Taylor. “It’s a microcosm of the universal church.”

Atlanta Auxiliary Bishop Luis R. Zamara celebrated the Mass to open the congress, and in his homily he reminded attendees to receive the body of Christ with a joyful mind and to let Christ into their hearts, so they can communicate his love to others.

“Don’t be afraid to smile,” he said in his homily. “When you smile, you have been touched by love. After that, go and make disciples.”

NEXT: Archbishop orders internal investigation of claims made against him