Hundreds gather in Washington for Fortnight for Freedom closing Mass 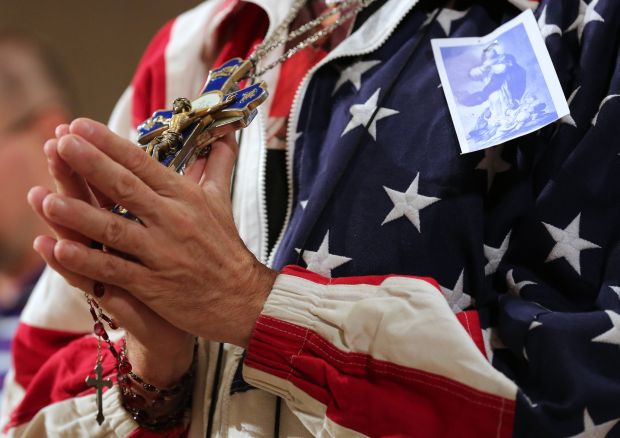 A worshipper holding a rosary and crucifix prays during a July 4 Mass celebrated at the Basilica of the National Shrine of the Immaculate Conception in Washington on the final day of the U.S. bishops' Fortnight for Freedom campaign. (CNS photo/Bob Roller)

WASHINGTON (CNS) — A deep appreciation for religious liberty brought Anh Thu Vu of the Binh Thuan province of Vietnam to the Basilica of the National Shrine of the Immaculate Conception for the Fortnight for Freedom closing Mass July 4.

She told Catholic News Service about her experience with religious persecution. “We lived in a small town and in school they would teach us that there is no God, and they would make it hard for us to go to church because exams would be on Christmas Day,” she said.

“So after experiencing those things, I think religious liberty is important. I think it should be a right inherent to all humans,” said the 23-year-old Vu. “I have been here (in the U.S.) for almost six years as an international student, and I appreciate (religious freedom).”

Hundreds gathered at the national shrine as the two weeks dedicated by the U.S. bishops to prayer, celebration and awareness of religious freedom drew to a close, just days after the Supreme Court ruled that closely held companies cannot be required to cover contraceptives and abortion-inducing drugs in employee health plans.

Prior to the beginning of Mass, members of the Neocatechumenal Way gathered in front of the shrine and sang hymns. An American flag billowed from the Knights Tower of the shrine. Lay men and women, families, priests, deacons, and consecrated men and women religious filled the Upper Church for the Mass.

Rossnat Rodriguez, originally from Lima, Peru, told CNS, “Religious liberty is the whole essence of being free. You should be able to practice your faith. I don’t think that’s something we can compromise.” 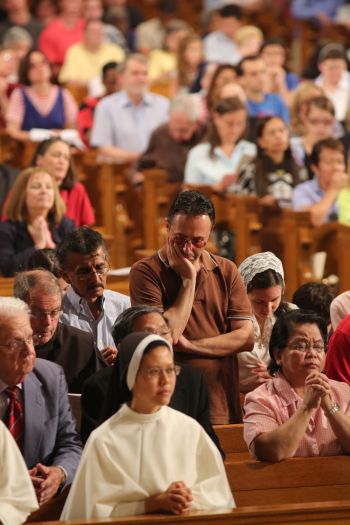 A man stands in prayer during a July 4 Mass celebrated at the Basilica of the National Shrine of the Immaculate Conception in Washington on the final day of the U.S. bishops’ Fortnight for Freedom campaign. (CNS photo/Bob Roller)

“When you think about the United States and freedom, the pursuit of happiness, this is what it’s all about. I come from a Third World country with a history of violence … (religious freedom) is very dear to my heart.”

Cardinal Donald W. Wuerl of Washington was the principal celebrant of the Mass; Archbishop Joseph E. Kurtz of Louisville, Kentucky, was the homilist.

In his homily, Archbishop Kurtz, who is president of the U.S. Conference of Catholic Bishops, reminded Catholics of the theme of this year’s fortnight: the freedom to serve.

“People of faith have had a tremendous impact on the fabric of the United States of America,” he said. “And (that is) precisely because so many have used the freedom that is ours as a freedom to serve.”

This faith-filled service, said Archbishop Kurtz, is good for America because thousands of religious communities, Catholic charities and hospitals have put their faith into action in order to serve others, allowing the “light of Christ to shine in our world.”

Archbishop Kurtz made clear that threats to religious liberty still exist and for the sake of faith and charity, this freedom must vigilantly be defended. 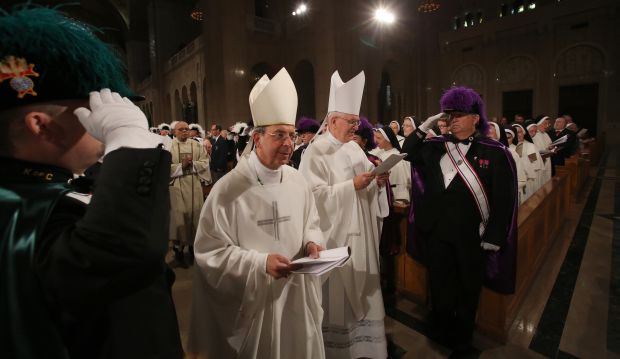 Archbishops William E. Lori of Baltimore and Joseph E. Kurtz of Louisville, Kentucky, president of the U.S. Conference of Catholic Bishops, arrive to concelebrate a July 4 Mass at the Basilica of the National Shrine of the Immaculate Conception in Washington on the final day of the U.S. bishops’ Fortnight for Freedom campaign. (CNS photo/Bob Roller)

He cited the Little Sisters of the Poor and their ongoing lawsuit against the Health and Human Services mandate requiring them and most other religious employers to provide contraceptives and abortion-inducing drugs in health care plans for their lay employees.

Archbishop Kurtz said the Little Sisters of the Poor need not and cannot choose between continuing to serve and compromising the convictions of their faith.

Archbishop Kurtz entreated Catholics to continue to pray for the defense of religious freedom. “We seek only to be good citizens. Good citizens of heaven and good citizens of earth. We’re free, and we want to be free to serve,” he concluded.

Msgr. Vito Buonanno, director of pilgrimages at the national shrine, is one of many who believe the fight for religious freedom is far from over, but he was encouraged by the enthusiasm shown for the fortnight’s closing Mass.

“Religious liberty is something that our forefathers put into the founding laws of our nation. It allows us to recognize the human, God-given dignity of every human being and to be able to worship God,” he told CNS in an interview before Mass began.

He looked around the Upper Church, nearly every pew filled with people. The response of the people to the fortnight and to the closing Mass, he said, was “tremendous.”

“I think opportunities like this provide a great witness that the church and the world need to see, the witness of our beliefs.”

PREVIOUS: Summit looks at the workplace, ways to meet needs of working families

NEXT: Christian-run college gets temporary relief from HHS mandate