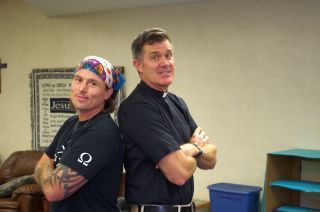 BOISE, Idaho (CNS) — They are, without a doubt, an odd couple.

During an interview at a break from a campus ministry meeting July 22, Jesuit Father Jack Bentz and Jean Pierre “Pete” Espil shared a common vision aimed at keeping young adults in college involved in their faith.

Father Bentz comes from the Jesuit community at Gonzaga University in Spokane, Washington. He said the Jesuits assigned him to Boise because “we were asked.”

He was expecting to start a new assignment in Los Angeles when his superiors asked him if he would come to Boise. “I said, ‘Sure, Boise.’ I am from eastern Oregon so I am pretty used to this area.”

Father Bentz has a strong history in theater — performing and directing. Previously he also worked with a bilingual theater group and speaks Spanish. With his training, he enjoys speaking in front of people, and also works well with small groups. “Theater builds community (sometimes) involving disparate groups, on a common project. I think a lot of those skills are transferrable here,” he said.

Father Bentz, whose assignment is for a year, said he also wants St. Paul’s to be a center for learning about Ignatian spirituality and bringing in Jesuit scholars from around the country to speak in Boise. He’s also interested in seeing how St. Paul’s interacts with the university community and the surrounding neighborhood.

Espil, a convert to Catholicism, has a long history in Idaho. In 2003, while pursuing his undergraduate degree at Boise State, he began working in parish youth ministry full time.

He is married to Jaime Thietten, a national Christian music recording star. In 2007, the couple moved to Tennessee for Thietten’s career; three years later they relocated to Utah to be with Espil’s father, who suffered a stroke. In Tennessee, Espil worked as a parish youth minister and in Utah, he was campus minister at Judge Memorial Catholic High School.

Two years later, Espil was hired at Our Lady of the Valley Parish in Caldwell. He spent his last semester at Judge commuting from Utah two weekends each month before finally returning to Idaho in June 2012.

Last fall, Espil and Thietten moved back to Twin Falls. Espil left ministry to work on his master’s degree in social work at the Boise State extension.

But he was unhappy, and he applied for the campus ministry job at St. John’s, where he’ll work with a longtime friend, Benedictine Father Hugh Feiss.

“I really believe this is what God wants of me right now,” Espil said. “My ministry model since day one has been (building) relationships. … That’s the only language I know how to speak well. It’s a universal language among teens and young adults.”

He hopes to make St. John’s “a home away from home, with an emphasis on hospitality and the corporal works of mercy, slightly adjusted for a student center.” That means having a sandwich available for a student who needs a bite to eat, or providing a place for a student to do laundry if that’s needed.

“They need to know they belong somewhere, and they are certainly welcome at St. John’s,” Espil added.

Both campus ministers readily accept the differences in their styles and backgrounds.

“It’s a big church and the more that we can represent that, the more space students can find for themselves,” said Father Bentz. “Diversity is a sign of strength,” added Espil.

Both said students need to know they are welcome at the Catholic centers on campus.

The centers are “places of evangelization” that need Catholics’ support, Father Bentz said.

“This is where young people are encountering a whole new way of being, to be agents in their lives and make their own choices as adults,” he added. “It will be life-giving for them if these programs are robust and are able to do a lot of really solid outreach.”

Brown is editor of the Idaho Catholic Register, newspaper of the statewide Diocese of Boise.

NEXT: Archbishop says he won’t resign, points to progress on abuse claims