Inside prison walls, volunteers change inmates’ lives and their own 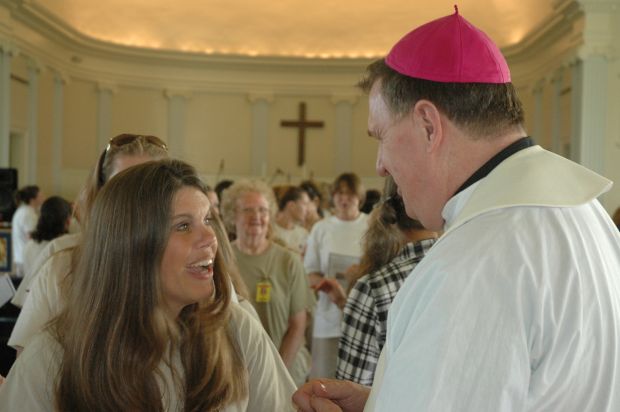 Constance Tomich shares a smile and a conversation with Archbishop Joseph W. Tobin of Indianapolis following the Mass he celebrated in the chapel at the Indiana Women's Prison in Indianapolis June 29. (CNS photo/John Shaugnessy, The Criterion)

She received the letter several weeks after she felt “very strongly urged by the Holy Spirit” to have the children she taught in a religious education program make Christmas cards for the inmates at a nearby correctional facility.

“I called the chaplain and asked for a list of names of inmates that never received any visitors, phone calls or letters,” Kazlas recalled.

The next part of the man’s letter touched her even more.

“His bunkie was a Catholic who had just begun to teach him the rosary, and he attended Mass a couple of times. He was full of hope for his future, and wanted to set things straight with God before he was released from prison,” she said.

“I never forgot his letter. It deeply touched my heart,” Kazlas told The Criterion, newspaper of the Indianapolis Archdiocese.

That letter has continued to inspire Kazlas during the past seven years as she has served as a volunteer and a visitor at the Indiana Women’s Prison in Indianapolis. 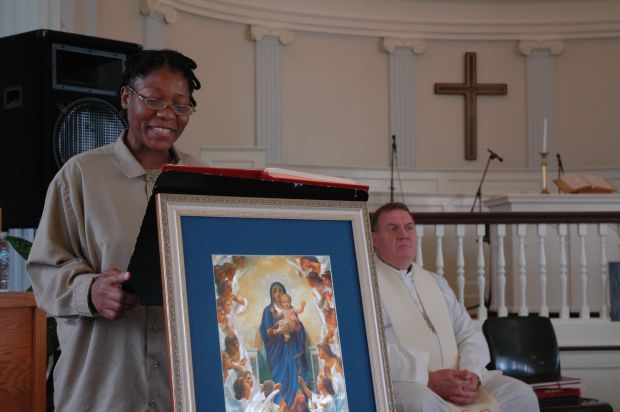 She’s involved in Bible study and catechism classes with the women during the school year. She attends Mass with the women every Sunday evening — Masses that are celebrated by priests from the archdiocese.

“Christ called us to visit those in prison for a reason,” said Kazlas, one of about 15 Catholic volunteers at the Indiana Women’s Prison.

“These men, women and children are sometimes rejected and abandoned by their own families. They feel like they are forgotten by society, that they are not worthy of anyone’s love, and that their sin can never be forgiven. Their sin is a heavy weight on their soul.”

The razor wires stretching across the prison walls and fences initially filled Deacon Steve Gretencord with fear and uncertainty.

So did the thought of doing prison ministry among men who have been convicted of federal crimes that include murder, gun running and the manufacture and distribution of drugs.

Then came the experience that unsettled the deacon for the Archdiocese of Indianapolis during one of the Communion services he leads every Thursday — alternating at the United States Penitentiary and the Federal Correctional Institution, both in Terre Haute.

“The very first time it happened, it caught me off guard,” said Deacon Gretencord. “I was giving a homily and someone said, ‘I don’t understand what you just said.’ Especially the men on death row, they’ll seek information right then. At first, it caught me off guard. Now, I take it as a compliment. They are paying attention. They ask questions. They want to learn.”

That glimmer of interest has developed into a deeper connection in the nearly three years of Deacon Gretencord’s ministry at the prisons.

“I am always struck, each and every time, when they receive the Eucharist, and they go back and kneel on the concrete,” he said. “When I see them bow their heads, I know Jesus is there.”

While his fear has faded, the 62-year-old deacon always maintains an awareness of his surroundings during his prison visits.

“Things can happen,” he said.

Good things happen, too, including the two times Indianapolis Archbishop Joseph W. Tobin has joined Deacon Gretencord in prison and celebrated Mass for the inmates.

“The inmates still talk about it,” said the deacon, who also ministers at Sacred Heart of Jesus Parish in Terre Haute. “It meant that much to them. And it showed me he understands I’m doing something worthwhile. I found out how much he cares about all the people in the archdiocese, whether they are in a parish or incarcerated.”

After a pause, Deacon Gretencord added, “Everyone wants to be tough on crime, and I understand that. But they’re human beings. We put them behind the concrete and the razor wire, and we forget about them. I know they have a debt to pay, but they’re still God’s children.”

Robert Mariacher, 75, said his involvement in prison ministry at the Plainfield Correctional Facility has changed his life.

“I really got into it when I retired at 62,” he said. “I was at a point where I was trying to put my life in order and thinking about, ‘What’s God asking me to do?'”

Part of the answer came when he considered Jesus’ instructions in Chapter 25 from St. Matthew’s Gospel: “For I was hungry and you gave me food. I was thirsty and you gave me drink, a stranger and you welcomed me, naked and you clothed me, ill and you cared for me, in prison and you visited me.”

“When you get to ‘visit the imprisoned,’ not many people are doing it or want to do it,” said Mariacher, a member of St. Luke the Evangelist Parish in Indianapolis. “I wanted to go where there was the least amount of people involved.

“It has helped me see things I wouldn’t have seen. And it’s helped me become a better Christian,” said the father of four and the grandfather of 12.

Mariacher is a volunteer with Kairos Ministry, a national, ecumenical effort that tries to bring Christ into the lives of people in prison — all in the goal of “changing hearts, transforming lives, impacting the world.”