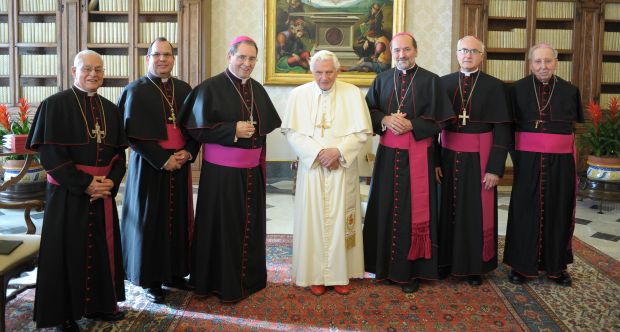 Auxiliary Bishop Edgar da Cunha, of Newark, N.J., stands third from the right during a 2011 visit with Pope Benedict XVI. Pope Francis named the auxiliary bishop to head the Diocese of Fall River, Mass., and accepted the resignation of Bishop George W. Coleman, who is 75, the age at which canon law requires bishops to turn in their resignation to the pope. (CNS photo/L'Osservatore Romano)

Bishop Coleman, who has been Fall River’s bishop since 2003, is 75, the age at which bishops are required by canon law to turn in their resignation to the pope.

Bishop da Cunha, a native of Brazil and a member of the Society of Divine Vocations, has been an auxiliary bishop of the Archdiocese of Newark since 2003. He has been vicar general of the archdiocese since June 2013.

The appointment was announced in Washington July 3 by Msgr. Angelo Accattino, charge d’affaires at the apostolic nunciature to the United States.

Bishop da Cunha, 60, will be installed as the eighth bishop of Fall River during a Mass Sept. 24 at the Cathedral of St. Mary of the Assumption in Fall River.

“I know I have so much to learn from all who live, work and minister to God’s people in the Diocese of Fall River,” from its geography and history to its many ethnic groups and their cultural traditions, he said at a morning news conference. “I’m willing to learn from them and to celebrate our faith together.”

“I wish to let the people of this diocese know that I come among them as a brother among brothers and sisters, with my sincere commitment to give my very best to build up the church, to live and practice our faith together,” he said.

“I could never, in my wildest dream, imagine myself standing here as the future bishop of this diocese,” Bishop da Cunha added. “Only God’s plan, and God’s will, could make it possible.”

Bishop Coleman introduced his successor at the news conference, welcoming him to a diocese rich in history and tradition and made up of priests, deacons, women religious and laypeople, all of whom “live the life of faith and seek to serve the church.”

He also thanked everyone in the Fall River Diocese for “their prayerful support over the years.”

“He knows the people of God, knows the depth of their faith, and he knows the challenges of serving and leading in a church with many cultural and ethnic traditions,” said Archbishop Myers, who also thanked Bishop Coleman for his 50 years “of priestly service and pastoral leadership.”

Archbishop Hebda described Bishop da Cunha as “an extremely capable leader who never fails to put the needs of other before his own.”

“I have quickly grown to admire him for his ability to bring the joy of the Gospel into even the most challenging of circumstances,” said the coadjutor, who has served in Newark since late 2013. “His life gives daily witness to a real solidarity with the poor and a deep empathy for those who for various reasons find themselves living in a culture that is not their own.”

Edgar da Cunha was born Aug. 21, 1953, in Nova Fatima in the state of Bahia in Brazil. He attended local schools in Nova Fatima and went to the minor seminary of the Society of Divine Vocations in Riachao de Jacuipe.

The Society of Divine Vocations was founded in Italy in 1920 to foster vocations and work with the poor.

He has a bachelor of arts degree from the Universidade Catolica do Salvador in Bahia and a master of divinity degree from Immaculate Conception Seminary in Mahwah, New Jersey. He was ordained for the Society of Divine Vocations in 1982 in Newark; priests of the order are known as Vocationist Fathers. He was appointed auxiliary bishop of Newark in 2003. He speaks English, Portuguese, Spanish and Italian.

After his priestly ordination his assignments included serving as vocations director for his order, 1982-1987, and as parochial vicar, administrator and then pastor at various parishes around the Newark Archdiocese.

From 1994 to 2000 he was master of novices and director of the Vocationist house of formation in Florham Park, New Jersey.

He was ordained an auxiliary bishop for the Newark Archdiocese Sept. 3, 2003. He was appointed regional bishop for Essex County a month later and then vicar for evangelization in May 2005, which was followed by his June 2013 appointment as vicar general.

He has served on numerous boards in the Newark Archdiocese and on the national level has been a member of the U.S. bishops’ migration and cultural diversity committees. He currently is a member of the bishops’ subcommittees on the Church in Latin America and on the Pastoral Care of Migrants, Refugees and Travelers.

NEXT: Summit looks at the workplace, ways to meet needs of working families