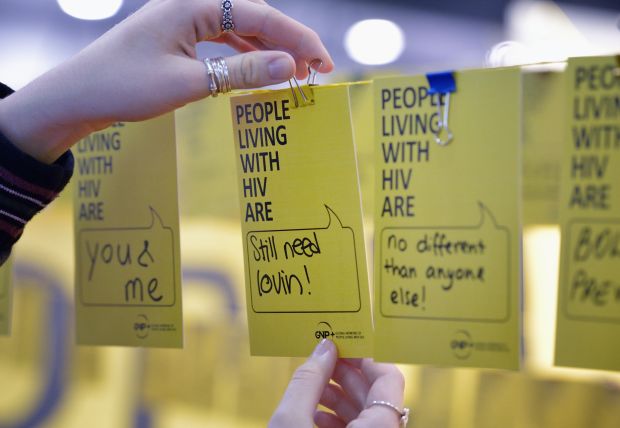 MELBOURNE, Australia (CNS) — Catholic AIDS activists said they are encouraged by the steady progress being made against HIV, but warned against complacency.

As some 18,000 delegates and visitors to yet another international AIDS conference made their way home from Australia in late July, there were no headlines about how the end of AIDS is just around the corner. There is no cure yet, conference participants heard, and there’s unlikely to be one in the near future.

Yet “there is more collaboration among the scientists than I’ve seen before, and more cooperation across disciplines, all of which gives hope for new discoveries,” said Msgr. Robert Vitillo, a special adviser on HIV and AIDS to Caritas Internationalis.

Msgr. Vitillo praised as “a step forward” a new approach to focusing on treatment as prevention.

Using benchmarks that experts have dubbed the 90-90-90 strategy, the new global assault on AIDS aims to expand testing so that 90 percent of HIV-infected individuals are aware of their status. Of that population, 90 percent will receive regular treatment with antiretroviral drugs. And 90 percent of those receiving that treatment will achieve sufficiently suppressed levels of the virus in their bodies that they will be unlikely to transmit it to others.

While the new strategy will not eliminate AIDS, Msgr. Vitillo and other activists hope it will transform the current public health emergency into a more or less manageable chronic disease by 2030.

“We haven’t given up on getting to zero, but 90-90-90 is a more realistic manner of reaching those goals,” Msgr. Vitillo told Catholic News Service.

Officials warned that serious obstacles remain, however, even to meeting lowered expectations.

Dr. Chris Beyrer, president-elect of the International Aids Society, told the conference’s closing session, “A wave of discriminatory laws and policies are setting us back toward exclusion: limiting rights, reducing health care access and aiding and abetting the virus.” He singled out anti-gay laws introduced in a number of countries, including Russia, Nigeria and Uganda, and one banning sodomy that has been reintroduced in India. 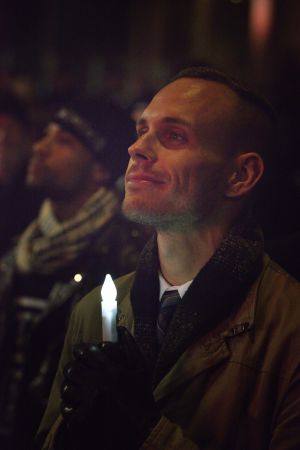 A participant in the 20th International AIDS Conference in Melbourne, Australia, joins in a July 22 candlelight vigil remembering those who have died of HIV- and AIDS-related causes. (CNS photo/Paul Jeffrey)

AIDS officials say HIV spreads more easily when certain groups in society, such as sex workers, gays or intravenous drug users are criminalized, in part because it makes it more difficult to educate people about safer practices.

In addition to stigma and discrimination, Msgr. Vitillo warned that complacency has become a common problem in some parts of the world.

“In the United States, Western Europe, Australia and New Zealand, because we have relatively low levels of infection and most people who are HIV-positive are on medications, we think the problem is solved. But that’s not the case. High-income countries have had a steady rate of new infections for several years, yet they’re lecturing everyone else on how to reduce their new infections,” he said.

Msgr. Vitillo said such denial about the lingering danger of HIV infection takes on even more dangerous overtones with the availability of pre-exposure prophylaxis, or PrEP. In the United States in 2012, the Food and Drug Administration approved the first PrEP drug, Truvada, for use in lowering the chances of HIV infection among high-risk individuals.

“With PrEP people can develop a sense that they don’t have to worry about infection anymore. So they can have all the sexual encounters they want, or inject any drugs they want, with a perception that they’re protected from HIV. But there are other diseases that they can acquire. We’re in danger, but there’s widespread denial about the danger,” Msgr. Vitillo said.

Many of those attending the conference signed the “Melbourne Declaration,” which stated that “nondiscrimination is fundamental to an evidence-based, rights-based and gender transformative response to HIV.”

It called for an end to funding organizations that “promote intolerance and discrimination, including sexism, homophobia, and transphobia against individuals or groups,” and demanded that restrictions on funding, “such as the anti-prostitution pledge and the ban on purchasing needles and syringes, must be removed as they actively impede the struggle to combat HIV, sexually transmitted infections, and hepatitis C among sex workers and people who inject drugs.”

“We prefer strategic and targeted advocacy that’s done on the basis of our relationships, rather than big public declarations,” he said.

In addition, he said some elements of the declaration promoted “activities or behaviors which aren’t in agreement with Catholic teaching. The Catholic Church serves all people, including many vulnerable people. Yet it’s one thing to serve people in need, and another to promote certain behaviors, such as we do when we present sex work as a profession like every other profession. I’ve talked to a lot of sex workers in the field, and I haven’t heard many say they’re proud and want to do it. They’re forced to do it, and many are held in slave-like conditions. I don’t think that’s in keeping with the dignity of the human person that we teach and try to respect.”

The monsignor and other church activists at the conference expressed concern about continued reductions in international AIDS funding, as well as shifts in funding away from traditional care providers, including faith-based groups.

This year in India, for example, the government ended 13 years of collaboration and funding for Catholic mission hospitals and community care centers.

“The government decided to close these and announced that people should go to the government health facilities. But those aren’t really capable of handling the complex multiple needs of HIV-infected people, especially complicated cases and those in the end stages of care,” said Father Mathew Perumpil, who coordinates HIV work for the Catholic Church in India.

He said the church has decided to keep the centers open, even without government funding.

“We were the first to open our doors to people living with HIV. We didn’t start these programs because of the government. We started them because of the people. So many of the centers remain open and continue providing services. But where do the resources come from? The patients can’t pay,” he said.

While the Indian government continues providing antiretroviral medications at no cost, church-run hospitals and centers are now struggling to raise funds for other services.

Perumpil said the people most at risk of losing services are women living in the countryside.

“The poor, the people without voices, are always the ones who are left behind. They aren’t the key populations that get lots of attention and money from the international community. They are poor women in villages who still know nothing about HIV and end up getting infected by their husbands who are working elsewhere,” the priest said.

“You don’t see them in Melbourne because this conference is too expensive for any of them to attend. They are marginalized not because of their sexual orientation, but simply because they’re poor. The church is close to them, and the church has to do a lot more in solidarity with them,” he said.