Chapter on abuse is not closed while people still suffer, says prelate 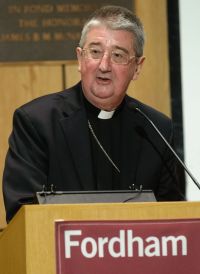 ROME (CNS) — The crisis of child abuse by clergy is not a thing of the past — it will linger until the church humbly and courageously reaches out to all people still suffering in silence, said Archbishop Diarmuid Martin of Dublin.

“To some it might seem less than prudent to think that the church would go out of its way to seek out even more victims and survivors,” opening up further possibilities for lawsuits, anguish and “trouble,” he told representatives from bishops’ conferences from around the world.

However, when Jesus tells pastors to leave behind their flock to seek out the one who is lost, that mandate “is itself unreasonable and imprudent but, like it or not, that is precisely what Jesus asks us to do,” he said in an introductory address July 7.

The archbishop was one of a number of speakers at an annual meeting of the Anglophone Conference on the Safeguarding of Children, Young People and Vulnerable Adults. The 2014 conference was being held July 7-11 at the Pontifical Irish College in Rome and was hosted by bishops from Ireland and Chile. Every year, two different countries organize the conference.

Founded in 1996, the conference is an informal gathering bringing together delegates from the church in the Americas, Europe, Asia and Africa, to share best practices and develop solid norms in the prevention and handling of the scandal of sexual abuse.

In his address, Archbishop Martin said, “The greatest harm that we could do to the progress that has been made right across the church is to slip back into a false assurance that the crisis is a thing of the past.”

Putting things right not only demands creating safe environments for all young people, he said, it requires the church become “a privileged place of healing,” where all survivors — even those who are afraid or angry — “can genuinely come to feel that the church is a place where they will encounter healing.”

“We are not that kind of church yet: and by far,” he said.

Those in the church who downplay the crisis or try to ignore or avoid mandates for prevention and enforcement “damage the church’s witness to the healing power of Jesus Christ,” he said.

The church also needs to do more than guarantee victims and families counseling, which often involves directing victims to counselors, which in effect leaves church members out of the process, he said.

“Healing cannot be delegated,” he said. It requires every church member be humble and Christ-like in lovingly embracing “wounded men and women, with all the brutality and unattractiveness of wounds.”

Helping perpetrators, victims, parishes, communities and people who are distanced from the church out of “disgust at what has happened to children” won’t happen with “slick public relations gestures or even from repeated words of apology,” the archbishop said.

It will come when the church recognizes “how compromise and insensitivity and wrong decisions have damaged the witness of the church,” he said, and when its members have their own personal healing, becoming more humble and journeying close to those who are lost and hurting.

“We are not there to tell the survivors what they have to do, but together to find new ways of interacting with respect and care,” and not hoping the problems go away, but seeking them out for reconciliation, he said.

Archbishop Martin said the abuse of children by clergy “should never have happened in the church of Jesus Christ.”

People can argue how abuse is commonplace throughout society and that the church shouldn’t be singled out or how the incidence of abuse by clergy is no higher when compared to others, he said. But there can never be “comforting statistics” because “Jesus himself tells us that children are a sign of the kingdom of God.”

People’s understanding of faith and the kingdom “is somehow measured in the manner in which we protect and respect and cherish children or in which we fail children. We know well the strong words of Jesus about those who would injure of harm children,” he said.

The healing the church is looking for will only come, he said, “when it welcomes our brothers and sisters who have survived abuse as Jesus would have welcomed them.”