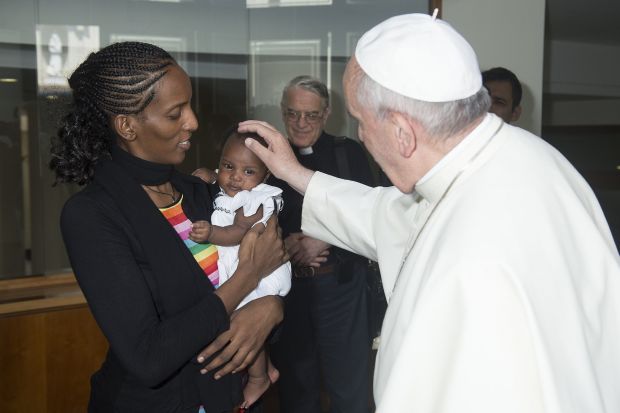 Pope Francis blesses Mariam Ibrahim of Sudan and her baby during a private meeting at the Vatican July 24. (CNS photo/L'Osservatore Romano via Reuters)

The pope spent 30 minutes with Ibrahim, her husband and two small children July 24, just hours after she had arrived safely in Italy following a brutal ordeal of imprisonment and a death sentence for apostasy in Sudan.

Jesuit Father Federico Lombardi, Vatican spokesman, told journalists that the encounter in the pope’s residence was marked by “affection” and “great serenity and joy.”

They had “a beautiful conversation,” during which the pope thanked Ibrahim for “her steadfast witness of faith,” the priest said.

Ibrahim thanked the pope for the church’s prayers and support during her plight, Father Lombardi said.

The Vatican spokesman said the meeting was a sign of the pope’s “closeness, solidarity and presence with all those who suffer for their faith,” adding that Ibrahim’s ordeal has come to represent the serious challenges many people face in living out their faith.

The informal conversation also touched upon the family’s plans now that Ibrahim is free, he said. The pope gave the family a few small gifts, including papal rosaries.

Ibrahim, a 26-year-old Catholic woman originally sentenced to death for marrying a Christian, had been released from prison in Sudan June 23 after intense international pressure. But she was apprehended again the next day at the Khartoum airport with her husband, who is a U.S. citizen, and their nearly 2-year-old son and 2-month-old daughter, who was born in prison just after Ibrahim’s death sentence.

Charged with possessing fake travel documents, Ibrahim was not allowed to leave Sudan, but she was released into the custody of the U.S. Embassy in Khartoum, where she then spent the following month.

Italy’s foreign ministry led negotiations with Khartoum for her to be allowed to leave Sudan for Italy.

She arrived in Rome July 24 aboard an Italian government plane accompanied by her family and Italy’s vice foreign minister, Lapo Pistelli, who led the talks that ended in her being allowed to leave Sudan.

Pistelli told reporters at Rome’s Ciampino airport that they had left Khartoum at 3:30 a.m. and spent most of the flight sleeping. However, he said, when awake, Martin, the 2-year-old, “practically dismantled the plane.”

The president of the group Italians for Darfur, Antonella Napoli, helped organize Ibrahim’s visit with the pope.

“Meriam will achieve her dream and see the pope. I had promised her that when we met,” Napoli tweeted before Ibrahim’s encounter with the pontiff.

Ibrahim joined the Catholic Church shortly before she married Daniel Bicensio Wani in 2011.

She was later convicted of apostasy and sentenced to death by hanging. Sudan’s penal code criminalizes the conversion of Muslims to other religions, which is punishable by death.

The Khartoum Archdiocese, which followed her case, had said Ibrahim had never been a Muslim because her Sudanese Muslim father abandoned the family when she was 5, and she was raised according to her mother’s faith, Orthodox Christian.

Despite pressure to renounce Christianity in order to be freed, Ibrahim refused. The church in Sudan said the charges against Ibrahim were false and appealed to the Sudanese government to free her from prison.

Ibrahim was scheduled to be in Rome for a few days before heading to New York with her family.