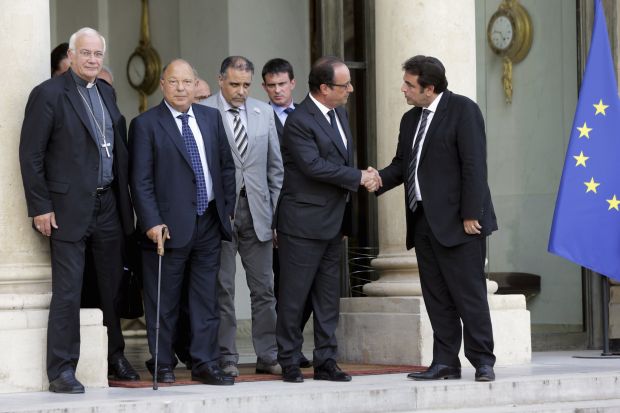 “Synagogues have been attacked, shops owned by Jewish people looted and anti-Semitic slogans chanted right here among us,” bishops from the Ile-de-France region, around Paris, said July 21.

“Like the great majority of French people, we are shocked. Such acts cannot be justified in any way by the international situation, and we demand that the government to do everything to maintain order in our republic.”

The statement said France should be setting an example, amid violence and injustice worldwide, “that coexistence is possible between people, whatever their culture, religion and origin.”

The bishops appealed to all French citizens to uphold a spirit of “mutual respect, dialogue and encounter,” and said special prayers for peace in the Israeli-Palestinian conflict would be held in churches July 27.

French religious leaders, including the president of the bishops’ conference, issued a statement after meeting to discuss the violence with French President Francois Hollande.

“After so much violence, rending people apart and causing so many victims, we reaffirm our wish to see justice and peace established,” Archbishop Georges Pontier of Marseille said in a July 21 statement with France’s Protestant, Orthodox, Jewish, Muslim and Buddhist leaders.

“We denounce any attempt to import or instrumentalize political divisions and interreligious hatred in France in ways that could endanger our common life, and we reject any amalgamation which seeks to link political positions irreversibly with religious affiliations,” the statement said.

At least 18 arrests were made in the Paris suburb of Sarcelles during anti-Jewish protests July 20, a week after separate attempts to storm two Paris synagogues led the government to ban pro-Palestinian rallies.

Speaking July 22, French Prime Minister Manuel Valls condemned the violence as “quite simple anti-Semitism, racism,” and warned it would not be tolerated.

However, Bishop Stanislas Lalanne of Pontoise, whose diocese includes Sarcelles, said the incidents should be viewed as actions by “highly organized and violent, but also extremely small minority groups.”

“There is no conflict between Jews and Muslims in France — we should absolutely banish such claims,” he said.

Dieter Graumann, president of the Central Council of Jews in Germany, said he was also “shocked and dismayed” by the latest “explosion of evil and violent hatred against Jews.”

“We never thought it would be possible in our lives to hear anti-Semitic views of the nastiest and most primitive kind chanted on German streets,” Graumann said in a July 21 statement from Berlin. “We never expected Jews to be openly threatened and attacked again in Germany, with synagogues daubed and branded as targets.”

NEXT: With passion for projects, Franciscan works to give Hondurans options