In El Salvador, priests work to fight influence of gangs 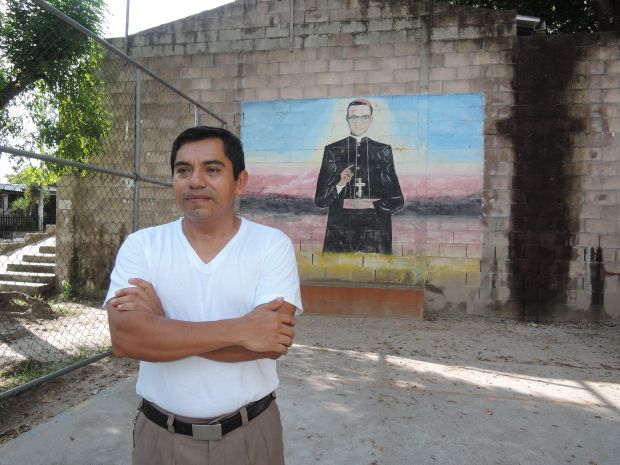 Father Salomon Perez stands near a recreational facility he had built next to the St. Joseph of Flores Parish in Tonacatepeque, El Salvador. (CNS photo/David Agren)

TONACATEPEQUE, El Salvador (CNS) — Gangs once menaced this bedroom community on the outskirts of San Salvador; residents would lock themselves in their homes after dark. The gangs charged residents extortion — “rent” — to live in Tonacatepeque and carried out killings in the community — sometimes attacking residents; other times settling scores among themselves in the streets.

“When I first came to the parish seven years ago, there was a virtual curfew,” said Father Salomon Perez, pastor of St. Joseph of Flores Parish.

“People would arrive on buses after work and run to seek refuge in their homes,” he said.

Today, a tense peace prevails in Tonacatepeque, where the short, soft-spoken Father Perez brought together tattooed gang members and the community in a negotiated peace five years ago. The truce with local gang leaders has curbed both killings and the crimes committed against ordinary people, in a country with one of highest homicide rates in the hemisphere.

Residents now head out after dark, extortions have stopped and the gangs themselves punish members stepping out of line, Father Perez said.

“This gives the community confidence, knowing that their lives will be respected in the neighborhood, in the place where they live,” Father Perez said of the truce.

Father Perez was viewed as a pioneer in El Salvador for brokering agreements with gangs and attempting to establish a sense of security in the areas served by his parish. Work by priests like Father Perez is increasingly important as Central American children abandon their crime-ridden countries and head for the United States on their own or with their families — often in attempts to attain safety or escape persecution from gangs operating with impunity.

The work is also an attempt to improve life at the local level in El Salvador, where solutions to the growing power of gangs — initially formed among Salvadorans living in Los Angeles — seem scant, and observers say the gangs increasingly recruit young people to commit their crimes.

The truce in Tonacatepeque draws comparisons to a national agreement between gang leaders that reduced homicides in 2012 and 2013. The larger truce, however, unraveled under intense criticism that the agreement and negotiations were not transparent and institutionalized impunity in a country where few crimes are solved.

“What the truce did in the country was bring about a ‘pax mafiosa,'” said Father Antonio Rodriguez, an oft-outspoken Spanish priest serving the tough Mejicanos suburb of San Salvador.

The March 2012 truce between imprisoned leaders of the Mara Salvatrucha and Calle 18 gangs caused an almost immediate impact. In a country of 6.3 million residents, the daily homicide rate dropped from 14 to 5.5, the Economist magazine reported. The gangs agreed to not kill each other, stop recruiting youths and turn some municipalities into neutral territory.

But the truce — a “deal with the devil,” according to critics like Father Rodriguez — caused controversy. Crimes such as extortion continued, while the government was coy about the existence of any such deal.

“In the end, there was no transformation of the actors committing violence,” Father Rodriguez said. “The truce (participants) continued being criminals and killers, who wanted to become political actors or a political force through the use of crime and violence.”

Some think the truce, even though it lacked transparency and strong social support, produced some positive outcomes.

Jones also noted, “The gangs have to be part of the solution.”

Father Perez considered the truce a non-issue in his community, where he already had worked out an agreement with the gangs to stop attacking ordinary people. Convincing the gangs to give up committing local crimes was not easy, but Father Perez invited gang members to participate in recreational soccer leagues. He also celebrated Mass in the streets and organized his parishioners, who marched for peace.

Father Perez said the gangs interpreted the marches and Mass as a show of unity by the community. They also heard the discourse “and started speaking with us.”

He offered the gangs recreational opportunities and spaces in vocational programs, which gang members have not taken advantage of — even though they’ve keep their promise not to prey on locals.

“The intention was a way to integrate them into honest jobs, but we’ve not had a favorable response,” Father Perez said, figuring the gangs made more money through running drugs and acting as hit men.

He also questions if the gangs are at the core of El Salvador’s problems or an expression of deeper violence in society.

“There’s a much stronger violence on the part of the community than the same violence exercised by the gangs,” Father Perez said.

“That’s why gangs find space,” he said. “Intrafamily violence is much stronger than the violence exercised by the gangs.”

“When there’s a personal and community accompaniment and strengthening of local actors and the social fabric, starting with rights, there’s a drastic reduction in homicides. I believe that dialogue is what creates this dynamic,” Father Rodriguez said.

He also advocates an individual approach.

“We’ve forgotten the trauma of the human person, of what’s personal, of individual attention,” he said. “Each individual person requires attention. It’s been 15 years of trauma.”