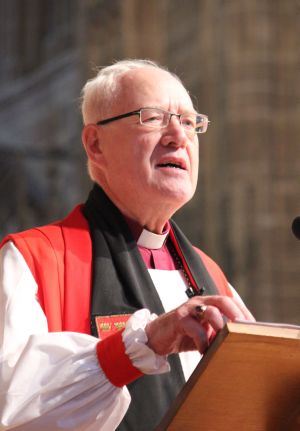 Lord Carey of Clifton, England, who served as Anglican archbishop of Canterbury 1991-2002, preaches during a service of Christian unity in the Anglican cathedral in Chester Jan. 19. (CNS photo/Simon Caldwell)

MANCHESTER, England (CNS) — Senior Anglican leaders have voiced their support for assisted suicide just days before a crucial debate on the subject in the British Parliament.

Lord Carey, who served as archbishop of Canterbury from 1991 to 2002, and Archbishop Desmond Tutu, former archbishop of Cape Town, South Africa, each said they were in favor of the practice.

Anglican Bishop Alan Wilson of Buckingham also has declared his support for “assisted dying,” making him the first serving bishop of the Church of England to say that doctors should be legally permitted to help their patients to commit suicide.

“Today we face a central paradox,” Lord Carey wrote July 11 in the Daily Mail newspaper. “In strictly observing the sanctity of life, the church could now actually be promoting anguish and pain, the very opposite of the Christian message of hope.”

Under the 1961 Suicide Act, the offense of assisting a suicide is punishable in Britain by up to 14 years in prison.

But the Assisted Dying Bill, which will be debated during its second reading in the House of Lords July 18, aims to change the law by allowing doctors to supply lethal drugs to people expected to die within six months and who are mentally competent.

The Church of England has opposed the bill on grounds of “patient safety, protection of the vulnerable and respect for the integrity of the doctor-patient relationship.” This position, according to the Church of England’s website, is consistent with successive resolutions against assisted suicide by its governing General Synod.

In his Daily Mail piece, Lord Carey announced that he would dissent from such policy and vote for the bill.

“The fact is that I’ve changed my mind,” he wrote. “The old philosophical certainties have collapsed in the face of the reality of needless suffering.”

On July 13, Archbishop Tutu expressed similar sentiments in a column for The Observer, a London-based Sunday newspaper.

“I revere the sanctity of life — but not at any cost,” the Nobel peace laureate wrote. “Yes, I think a lot of people would be upset if I said I wanted assisted dying. I would say I wouldn’t mind, actually.”

However, Archbishop Justin Welby of Canterbury called the Assisted Dying Bill “dangerous.” He argued that an assisted suicide law would exert pressure on the sick, disabled and elderly to “stop being a burden to others.”

“What sort of society would we be creating if we were to allow this sword of Damocles to hang over the head of every vulnerable and terminally ill person in the country?” he asked in a July 12 article for The Times newspaper.

The Catholic bishops of England and Wales have encouraged the laity to write to politicians to ask them to oppose the bill.

Catholic Bishops Mark Davies of Shrewsbury and Mark O’Toole of Plymouth have issued pastoral letters condemning the bill, and Bishop Philip Egan of Portsmouth has announced that he will open the churches of his diocese for a “holy hour” of prayer and adoration July 17, the eve of the debate, in the hope that the legislation will fail.

Lord Carey was nominated to Britain’s second political chamber on his retirement, but 26 Anglican bishops, including Archbishop Welby, sit there as “Lords Spiritual” and have a right to vote.

If the bill progresses successfully through the House of Lords, later this year it will go to the House of Commons, where lawmakers will be allowed to vote according to their consciences.