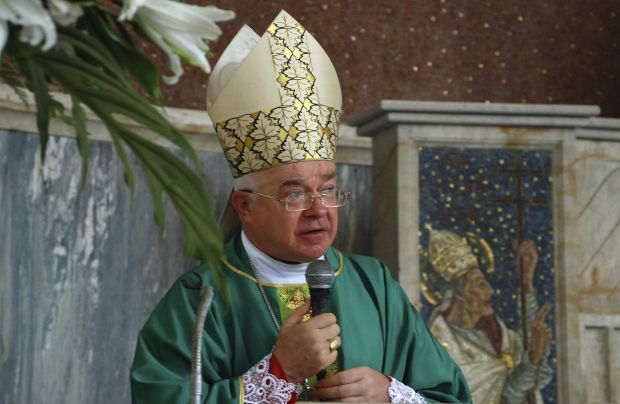 VATICAN CITY (CNS) — A Vatican investigation has led to the expulsion of a former Vatican ambassador from the priesthood in response to allegations of sexually abusing minors.

Polish Archbishop Jozef Wesolowski, the former nuncio to the Dominican Republic, was sentenced with laicization after a canonical process conducted by the Vatican Congregation for the Doctrine for the Faith, the Vatican said in a written statement June 27.

The 65-year-old archbishop has two months to appeal the decision.

The Vatican City criminal court’s own trial of the archbishop will begin once the canonical process concludes, the statement said.

Given the fact that the archbishop has been “dismissed from the clerical state,” the Vatican said, “all measures appropriate to the gravity of the case” would be taken while he is awaiting his criminal trial.

The specifics of those measures were to be decided by the former nuncio’s superiors within the Vatican Secretariat of State, said Jesuit Father Federico Lombardi, Vatican spokesman.

The archbishop had “enjoyed relative freedom of movement” while the canonical process was underway, the Vatican statement said. However, given the imposed censure, it was expected the archbishop’s movements would be limited, Father Lombardi said.

The Vatican statement said the first round of the canonical process against the former nuncio ended in a “conviction of dismissal from the clerical state.” As such, Archbishop Wesolowski loses all rights and duties associated with being a priest, except the obligation of celibacy. The statement did not specify if there were any other sanctions or requirements in connection with his sentencing.

Once the canonical case is closed definitively — in two months if there is no appeal — the “criminal proceedings” of Vatican City State’s own judicial system would begin, the statement said, since the archbishop was a Vatican citizen when he reportedly abused under-aged boys while serving as nuncio in the Dominican Republic.

Father Lombardi said it was not clear whether the archbishop would or could be tried under the new criminal codes Pope Francis approved in 2013. The new laws more clearly define and establish penalties for specific crimes against minors, including sexual violence against children.

Before the new laws went into effect Sept. 1, 2013, specific crimes against minors had been dealt with under more generic laws against the mistreatment of minors. The bulk of the Vatican’s criminal code is based on an 1889 version of Italy’s criminal code and did not contemplate many specific offenses such as, for example, the crime of child pornography.

The Vatican removed the archbishop from his position as apostolic nuncio to the Dominican Republic in August 2013 after he was accused of paying for sex with boys in the Caribbean country.

Archbishop Wesolowski arrived in the Dominican Republic in January 2008 after serving first as a priest in Krakow, Poland, from 1972 to 1999, then as Vatican ambassador to Bolivia from 1999 to 2002 and ambassador to Uzbekistan, Kyrgyzstan, Tajikistan and Kazakhstan from 2002 to 2008.

Bishop Tadeusz Pieronek, a former Polish bishops’ conference secretary-general, told the Polish Press Agency the ruling had been in response to “grave charges” against Archbishop Wesolowski and would help the wider church to “cope with such sins.”

Father Wojciech Gil, a Polish priest also accused of abuses in the Dominican Republic, was arrested during a vacation in Poland in February and has also been suspended from priestly duties pending trial.

In May, Pope Francis had told reporters during an in-flight news conference from Israel to Italy that three bishops were under investigation for misdeeds related to the sexual abuse of minors. One — presumably the former nuncio — had “already been condemned,” the pope had said, and his penalty was being studied.

The pope told reporters the abuse of children was “an ugly crime” and affirmed a policy of “zero tolerance” for abusers.

Previously, the Vatican had acknowledged that a formal investigation was underway against Cardinal Keith O’Brien, the former archbishop of St. Andrews and Edinburgh, who resigned in 2013 after admitting to sexual misconduct.

Only a few bishops have been laicized in connection to allegations of abusing minors; they include Auxiliary Bishop Gabino Miranda Melgarejo of Ayacucho, Peru, who was dismissed from the priesthood in 2013 because of sexual misconduct. Retired Bishop Raymond Lahey of Antigonish, Nova Scotia, was convicted by a civil court in 2011 of importing child pornography and was laicized by the Vatican in 2012.

NEXT: Vatican reform proceeding as cardinals meet with pope