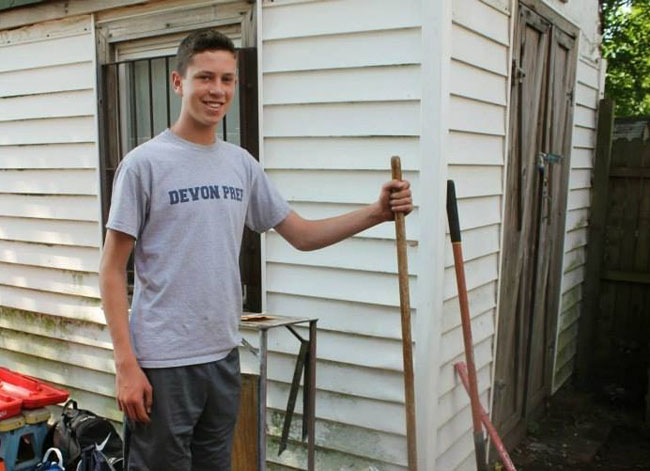 Devon Prep junior Andrew Walheim works on a summertime project with schoolmates to spruce up a home in Delaware. 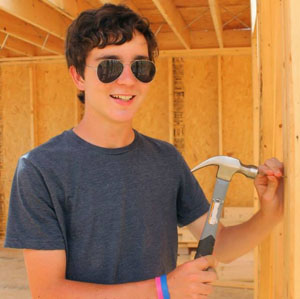 Joseph Conroy, a Devon Prep junior, worked on a house in Delaware during the school’s summer mission trip organized by Catholic Heart Workcamp.

Although the school year ended in mid-June for 28 area Devon Prep students and five chaperones, summer vacation had to be delayed just a bit. Barely two weeks into the summer break they traveled to Delaware for a week-long mission trip organized by Devon Prep religion teacher Joe Lewis through Catholic Heart Workcamp.

They didn’t have to go too far to find a need for their services. The job sites were located throughout the state of Delaware — as far north as Delaware City and as far south as Milford. During the trip they slept in classrooms in St. Thomas More Preparatory Academy in Magnolia. That’s also where they ate morning and evening meals and attended a number of liturgical events such as daily prayer and Mass.

The young men, in grades seven through 11, spent their days working on a variety of projects such as: building handicap ramps; repairing homes, decks and porches; working with Habitat-for-Humanity to build a new home and helping stock the organization’s local warehouse; working for local parishes and schools to maintain their buildings and property; and helping local residents by landscaping, power-washing, painting and laying brick and stone patios at their homes.

Although the work was tiring, it was also fulfilling for the boys. “Trips such as these give our students the opportunity to meet others who are not as fortunate as themselves and to be of service to them,” said Lewis. “It gives them a greater appreciation of the blessings they have.”

Their contributions did not go unnoticed. “Many of the residents we helped visited us at our final-day gathering to thank us personally for a job well done,” Lewis said. “A number of local charitable organizations also expressed their appreciation for the work we contributed to.”

Groups of Devon Prep students have participated in summer mission trips for many years, previously working in Eastern Kentucky helping local parishes and the Piarist Fathers’ school in that area. Last year’s mission trip took 18 students and three chaperones to Oil City, Pa., to work on homes of residents.

Catholic Heart Workcamp is a non-profit organization established to offer quality service projects and evangelical programs for Catholic young people and their leaders. Their mission is twofold: First, to share the love of Jesus and serve the neglected, brokenhearted and marginalized; and second, to empower participants to live as disciples of Christ through serving others.

Devon Prep is a private, Catholic, college preparatory school for young men in grades six through 12 conducted by the Piarist Fathers and located on Philadelphia’s Main Line. For more information call 610-688-7337, email admissions@devonprep.com or visit www.devonprep.com.

PREVIOUS: Now it’s easier for children to have a free lunch at school