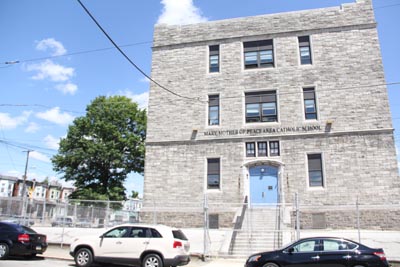 The former Mary Mother of Peace School, located at St. Barnabas Parish in Southwest Philadelphia, has reverted to its previous name of St. Barnabas School as it is now operated by the Independence Mission Schools organization and not as a parish grade school. (Sarah Webb)

“Man bites dog” stories are always fun. For years dwindling enrollment and rising costs forced many of Philadelphia’s Catholic parochial schools to combine or shut down. In many cases, parishes sold or leased empty school buildings to the public school system and more recently to charter schools.

News flash – the Independence Mission School system, which operates 14 former parish schools in mostly inner-city Philadelphia, has recently purchased the former William Harrison Public School in North Philadelphia for $1,365,000. After extensive renovations it will reopen next year as the new home for nearby St. Malachy School.

The parish school, which traces back to the 1850s, has been in its present building since the 1890s, and it became one of the Independence Mission Schools when they were established last year.

Today the building needs extensive renovations and by current standards it really can’t grow to much more than the almost 200 current students.

Between the purchase and renovations of the William Harrison School, which closed in 2012, the total cost will be about $4.5 million, estimates Aldo Cavalli, the president of the Independence Mission Schools.

It will be well worth the price. The new St. Malachy, relocated within a block and a half of the old, will have 24 classrooms with facilities for art, music, a gym, cafeteria and auditorium, which would raise the capacity to about 550 students, Cavalli estimates.

This is fine with Mary Holmes; both she and her husband, Shawn Williams, are graduates of St. Malachy, and their children Lashawn and London are entering sixth and third grades respectively.

When they first heard that Independence Mission Schools would be taking over St. Malachy they had some misgivings.

“Sometimes change takes getting used to,” Mary said, “but it is going very well. We wanted it for the academics and the religion.” Now that St. Malachy’s is expanding into the larger location, it will be even better, she believes.
“Our goal is to make a new Catholic elementary school, something that has not been done in many, many years,” Cavalli said.

Judging from their track record of just a single year, they can probably pull it off.

In their first year as Independence Mission Schools they showed a combined enrollment 4,150, up from their previous combined 3,800 and this year it is on track to increase to 4,800 or even 5,000.

The schools (with the exception of the future St. Malachy) are still owned by their respective founding parishes. Under an agreement with the Archdiocese of Philadelphia, Independence Mission Schools has a 15-year lease at $1 a year, and it is responsible for all maintenance, improvements and utilities in the schools.

Although the staff and faculty are employees of Independence Mission Schools, they utilize the curriculum of the Office for Catholic Education, including the religion program and safe-school policies. While it varies from school to school, because of location the majority of the children are not Catholic, but “part of our agreement is to run them as Catholic schools,” Cavalli said. “Spirituality is important.”

Checking each of the schools against Philadelphia Schools Partnership data, “Mostly they are doing well,” he said.

The key is to make the schools both sustainable and affordable, and to this end Independence Mission Schools aggressively seek grants, with funds coming from Pennsylvania’s Opportunity Scholarship Tax Credits (OSTC), Educational Improvement Tax Credits (EITC), BLOCS, foundation grants and private donors.
Because most of the students come from moderate or low-income families, the fundraising is important. Every student receives some financial aid and every student receives free lunch.

Through efficient management, the actual cost for educating a child in an Independence Mission School is about $4,200 Cavalli estimates, an amount reduced by whatever financial aid the family receives. This compares to a current cost of $12,300 in a Philadelphia public school and approximately 80 percent of that sum in a charter school.

The Commonwealth of Pennsylvania pays a total in $175 million in tax credits to businesses that give EITC and OSTC scholarships. While some people and organizations, especially the public school lobby, complain about the state’s role, it is really an enormous saving to the city and state.
If all 59,000 of the students in the Archdiocese of Philadelphia’s Catholic schools transferred to public schools, it would cost the city and state a staggering $700 million in additional funding, not to mention the many thousands of students in schools of other Pennsylvania dioceses. Just looking at the 5,000 students expected in the Independence Mission Schools this year, without their schools the Philadelphia School District would be a further $60 million in the red.

Now with its first year behind it, Independence Mission Schools is adding a brand new member – St. Barnabas School in Southwest Philadelphia. The school is a perfect example of the implosion of the parochial schools in Philadelphia.

In recent years the school was operating as a regional Catholic school under the title Mary, Mother of Peace. “Mother of Mergers” might have been more apt. Over the years, through parish mergers and school consolidations, it drew students from what were once five parochial schools: St. Barnabas, Most Blessed Sacrament, St. Clement, St. Irenaeus and Good Shepherd.

Two decades ago, which was hardly a high point for enrollment, there were more than 2,000 students in these schools. Last year enrollment at MMP slipped to 226, and the school was not financially viable.

After taking on the school, Independence Mission Schools polled the parents and at their suggestion with the permission of Archbishop Chaput, the school will revert to its original name, based at the site of St. Barnabas at 64th and Buist Avenue.

Through effective marketing “we already have enrollment to 260 and expect it to go over that, said Marie Keith, director of marketing and enrollment for Independence Mission Schools. “We expect to open a second kindergarten.”

In the end, the Independence Mission Schools are so far growing faster than neither Cavalli nor anyone else expected.

PREVIOUS: Kids heading back to school get big assist from Office Depot

NEXT: Plans in place for growing Catholic schools, not managing decline