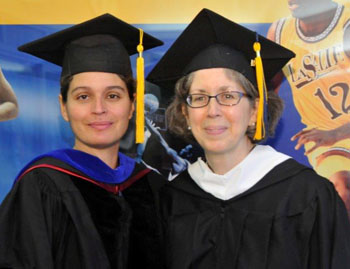 Sister Donna Cicalese, S.S.J., was putting her education to work even before she finished her master’s degree in translation and interpretation (MTI) at the Hispanic Institute at La Salle University.

Her final course was an internship that concluded at Children’s Hospital of Philadelphia (CHOP), where she interpreted for Spanish-speaking patients and families with their doctors. The hospital was so impressed with her work they offered her a position.

“I am already working as a Spanish medical interpreter, which was one of my goals,” said Sister Donna, who is one of the first two graduates of the MTI program.

She learned to speak Spanish at an immersion program in Mexico, and then lived and worked in Puerto Rico. However, it wasn’t until she spent a year in France that realized she wanted to know more about the language.

“I was asked to act as a Spanish/English interpreter at two different international gatherings,” Sister Donna said. “I found it very difficult and intense, but at the same time exciting and fulfilling as I helped others communicate who otherwise would not be able to. When I returned to the U.S. from my year in France, I wanted to learn more about how to interpret and translate.  I went online and found the Certificate in Translation program at La Salle. By the time I finished that program, a Certificate in Interpretation was developed, so I started that. I finished the second certificate, and then the MTI program was approved and unveiled.”

“I found that for me, translation — the transfer of a written text from one language to another — came much easier,” she said. “When I began the interpretation classes, which is the oral transfer of a message in one language to another, I found I had to work much harder. Also, the special terminology that is integral to areas such as medicine, law and business was particularly challenging for me. The vocabularies are specific to these fields and not part of everyday speech.”

Sister Donna was nearly finished her CHOP internship when she was laid off from the School District of Philadelphia, where she worked as a translator.

“It was just natural to ask her to stay with us,” said Gabriela Jenicek, manager of language services, spiritual care and cultural support at CHOP. “It was the most seamless transition I have experienced. We receive many compliments from staff and families about (Sister) Donna who appreciate her sensitive and caring nature. She truly makes a difference in people’s lives by allowing them to be heard and understood.”

Jenicek added that Sister Donna, “excelled quickly as an intern through her diligence, calmness and expertise as a professionally trained medical interpreter. The language services team welcomed her and integrated her quickly.”

Sister Donna’s thesis project was creating a process to help religious congregations identify and develop the talent of their bilingual members, associates and other partners to serve as informal interpreters and translators.

The objectives, she said, are to identify persons who have a good understanding of Spanish and English and form small working groups based on language pairs. The project provides them with information about what interpretation and translation is, and the roles and tools of the interpreter/translator.

“It also describes a training process through which they can create their own practice materials using current relevant topics and issues in religious life and social justice,” she said. “The project’s aim is to form networks of bilingual members, associates, etc., to be available to provide this valuable service to their own and/or other religious congregations as well as to the broader ecumenical community to further the mission of Jesus today.”

Next year, Sister Donna will interpret at a conference of the Sisters of St. Joseph of Latin America and the Caribbean to be held in Mexico.

La Salle University was established in 1863 through the legacy of St. John Baptist de La Salle and the Christian Brothers teaching order, which St. La Salle founded in 1680. La Salle is an educational community shaped by traditional Catholic and Lasallian values. The University is ranked by U.S. News & World Report among the top 30 schools in the North Region and among the top 10 Catholic schools in the region.