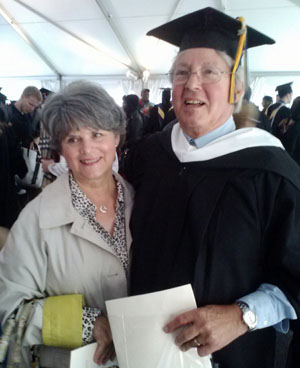 Angelo and Susan Delorenzo celebrate his graduation this year, at age 71, from La Salle University.

Retirement for Angelo Delorenzo was not going to be about vacations and golf. “I knew I was going to give back to my community, and volunteer work was the first step,” said Delorenzo, 71, who recently earned a Master of Arts degree in theology from La Salle University and was the oldest member of the Class of 2014.

Delorenzo works as a Catholic lay chaplain helping the seriously ill and dying.

His journey on this road began with a very personal experience: being with his mother at St. Camillus Independent Living facility in Milwaukee when she died of leukemia.

“Being with my mom at that time was very special,” said Delorenzo, adding that caring for her at that important and critical time in her life led him to believe he could do it for others.

“The decision to become a chaplain was a step-by-step process as my working career was coming to an end. The spiritual care department and those involved in spiritual care at St. Mary Medical Center lit the fire where my mom and my wife had set the foundation,” said Delorenzo, who lives in Washington Crossing. He said his mother and his wife Susan were also influential in his decision to become a chaplain.

Delorenzo sees patients in the “No One Dies Alone” program at the St. Mary Medical Center in Langhorne, at his parish, St. George’s in Titusville, N.J., and at other sites in the Diocese of Trenton. 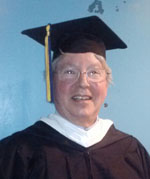 Delorenzo is seeking certification as a Catholic chaplain through the National Association of Catholic Chaplains (NACC).

“I want to continue my journey as a chaplain to serve those who are seriously ill and dying. Being properly trained and qualified to serve these people and their families at this critical time in their lives is most important,” Delorenzo said. “The completion of the certification process through the NACC is another beginning for my ministry of service and love for those in need.”

In October, he will be interviewed by three NACC-certified chaplains as the final requirement to become a certified chaplain. He also had to fill out an exhaustive questionnaire about his background that the three chaplains will review.

For 47 years, Delorenzo worked in the insurance industry in a number of capacities, but knew he would still be active in retirement. “At 71, I believe I have so much to offer within my own faith and all peoples through dialogue and understanding as I serve the seriously ill and dying patients and train others at St. Mary, my parish, St. George, and the Diocese of Trenton. I loved my work, yet chose a second career serving my fellow human beings,” he said.

“My experience at La Salle hopefully will continue, as I continue to use La Salle as a resource to audit and take courses that support and enhance my chaplaincy. Father Frank Berna (director of the M.A. in theology program) was so supportive and encouraging as I selected courses that enhanced my ministry and make me a better chaplain. Many of the professors were absolutely outstanding, and I hope to keep in touch with those who inspired me and taught me so much,” Delorenzo said.

Working with seriously ill and dying people can be difficult – patients will ask him why is this happening to me, or will call him in the middle of the night when they need to talk – which he does. At these moments and when appropriate, Delorenzo said he reminds them of Jesus: “He knew he was going to suffer and die, yet Christ gave his life for us and is the path to love and peace,” he said.

As for being the oldest member of La Salle’s Class of 2014, he said, “I’m proud of that. I think it’s important for more people my age to stay active. Getting an education is important. I couldn’t do what I want to do in my ministry without what I’ve learned at La Salle University.”

NEXT: As parish mergers go, Levittown’s looks like a model