As parish mergers go, Levittown’s looks like a model 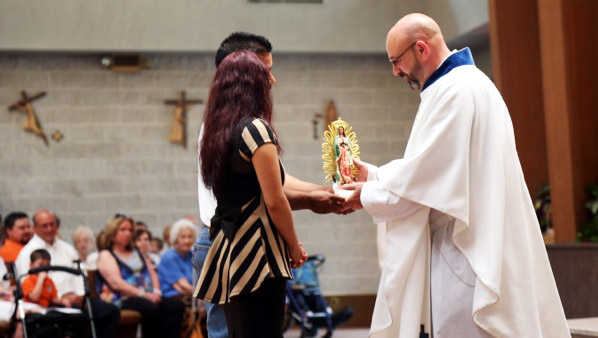 During the installation Mass of Father Michael Hennelly as pastor of the newly merged Queen of the Universe Parish, members of the Hispanic Catholic community present him with a statue of Our Lady of Guadalupe for the church.

Parish mergers are not always easily accomplished. No matter how much sense they make for pastoral reasons, some folks get their back up when they feel they are being told where to go. In the end the mergers generally work out, but in some cases quicker than in others.

(See a photo gallery from Queen of the Universe Parish.)

They do have a shared heritage, both being founded within a year of each other in the early 1950s while William Levitt was still building his innovative planned residential community and of course, like so many parishes founded under Archbishop John F. O’Hara, both parishes in name honored the Blessed Virgin Mary.

The big white tent, under which folks gathered for fellowship after the liturgy, could easily be a metaphor for what is happening at the parish.

“We had 90 volunteers working together,” Father Hennelly said. “I say thank you every day. We have joy in the midst of loss and we have hospitality.” 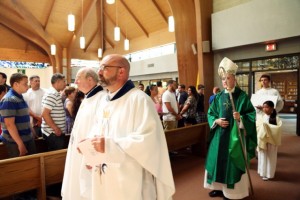 Bishop Michael Fitzgerald celebrated the installation mass of Father Michael Hennelly as pastor of Queen of the Universe Parish in Levittown, Bucks County.

The crowds have been good at all of the Masses, even in summer, when because of vacations there is usually drop-off. “We will see how it will be in the fall,” Father Hennelly said.

Now the only Mass celebrated at Immaculate Conception is the Saturday vigil Mass; Queen of the Universe has retained all of its Masses and added the Spanish Mass.

“We’ve been getting 200-250 to the Spanish Mass, and we expect it will be more in the fall,” Father Hennelly said. “They are part of our parish family. We have cultural diversity and we even have a Liberian group that meets in the parish monthly.”

When the merger announcement was made, Father Hennelly made it a point to visit every Mass at Immaculate Conception to assure the people they would be welcome at Queen of the Universe.

“It is not about me. We are responding to the pastoral reality and we are doing it together,” he said. “The Mass is the most important thing.”

Part of the ease of transition is the previous combination of the two parish schools into Holy Family Catholic Regional School at the former Queen of the Universe School. Because of this families of children in parochial school from Immaculate Conception were already connected in a way to Queen of the Universe. The school should reopen this year with between 475 and 480 students, Father 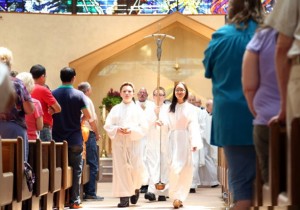 Helpful too were the parish councils and now the new transition team that will be meeting every three weeks. It has 14 members, including two from the Hispanic community and the rest evenly divided between the two parishes.

“People are more or less familiar with each other already,” said John Vittorio, a transition team member originally from Immaculate Conception. “It is like moving in with your brother. I was born and raised in Levittown and people were used to going to the different parishes for christenings, wedding and funerals, and of course our school was merged and my son was going to Holy Family School. I expected this to be very cumbersome but it worked from the start. We are all Catholics on pilgrimage.”

Susan Weed, another transition team member from Immaculate Conception, said, “most of the people have been positive, we have been blessed.” At the installation Mass about 400 people were expected and it was a surprise when 700 came, and so many volunteered to work for the event, she noted.

The people working together is very encouraging, she believes. While some of the older people might have been upset when the news of the merger was announced, for herself, “I haven’t heard of anyone who said they would not stay with the parish,” Weed said. “Father Hennelly wants people to go where they feel comfortable. He has been sensitive as we go forward, and I am sure he is bringing things together.” 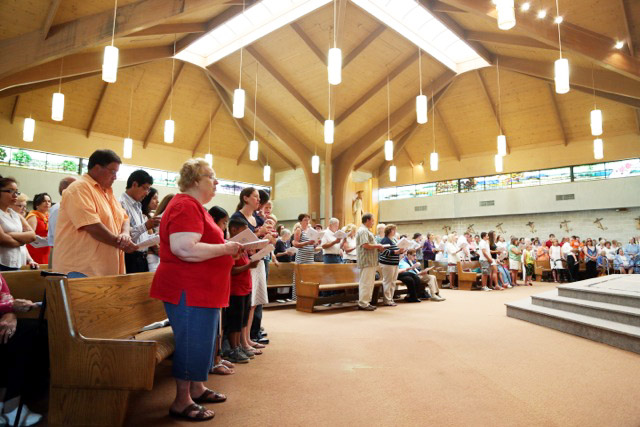 NEXT: Day of prayer urged for Iraq on Sunday