What is the Church of Jesus Christ of Latter-day Saints? 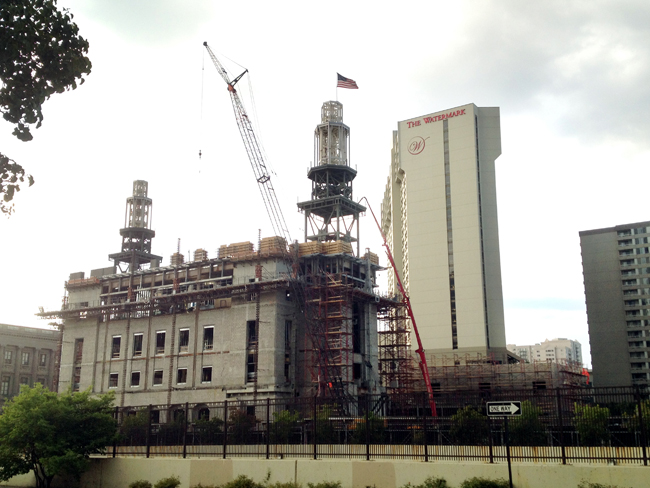 Construction continues on the Philadelphia Pennsylvania Temple for the Church of Jesus Christ of Latter-day Saints, located at 18th and Vine Streets, little more than a block away from the Cathedral Basilica of SS. Peter and Paul in Philadelphia. (Sarah Webb) 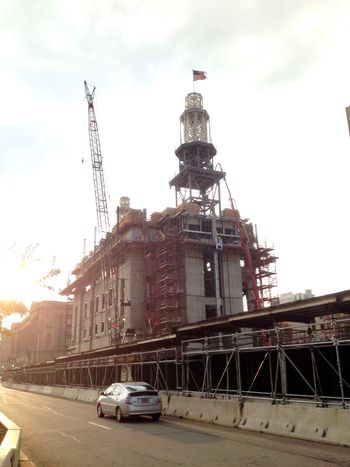 The Church of Jesus Christ of Latter-day Saints, one of the fastest growing religious denominations in the world, has more than 15 million members in more than 29,000 congregations worldwide. There are about 6.3 million members in the U.S., and almost that number in South America. There are also several million Mormons who are not members of the LDS.

The LDS movement traces back to its foundation in 1830 in upstate New York by Joseph Smith, and its theology is based on scripture and what are called divine revelations reported by Smith and some of his successors.

It differs from traditional Christianity in several aspects, including its understanding of the nature of the Trinity, the nature of heaven, distinctly different rituals and in its earlier years the embrace of polygamy – men could have multiple wives (but not vice versa). Smith and his followers often faced strong community opposition especially because of polygamy and a suspicion that they wished to replace democracy with a Mormon theocracy. Consequently they relocated to Ohio, then to Missouri and Illinois, where in1844 Smith was murdered by an angry mob.

Brigham Young, Smith’s successor, led his followers to then-sparsely settled Utah, where he founded Salt Lake City and it has been the LDS headquarters ever since. Because Mormons were a majority in Utah, it was only after the LDS formally renounced polygamy in 1890 that it was granted statehood, although some of the small splinter offshoots practice it to this day.

Mormons are noted for their strong emphasis on family life, community life, healthy lifestyle and evangelical zeal which is exemplified by a very strongly encouraged missionary period for young adults.

On an organizational level the LDS is led by 15 apostles, the most senior of whom is president assisted by two apostles as counselors. On the next level are “the seventies” which have up to 70 members each and either serve at headquarters or around the world. Next there are “stakes” which include a number of congregations and are led by a stake president.

The individual congregations called wards are led by a bishop. Stake presidents and bishops are unsalaried and serve for terms of five years or so. If it seems odd that bishops would be at the bottom rank there is a reason — all males over the age of 12 are eligible for priesthood.

Worship, which is mostly done on the congregation level in meetinghouses, is fairly similar to that of the churches of many Christian congregations with prayers, hymns, preaching and a communion service, which includes partaking of bread and water, not wine. These worship services are open to anyone who wishes to attend; one does not have to be Mormon.

Temple services on the other hand are very private and may only be attended by practicing Mormons who have obtained sufficient rank for the service. Temple liturgies are considered secret, but in today’s generation there are no secrets. Just as the doings of a “secret” conclave to elect a new pope become common knowledge shortly after it is completed, former LDS members have broken their word, and secretly recorded the ceremonies and published them on the Internet.

In some superficial aspects temple rituals are strikingly similar to Masonic ceremonies (also secret but widely published).This could be explained because Joseph Smith and many of his original members were also Freemasons. But Mormonism is considered a religion; Freemasonry is just a fraternal organization. We Catholics may not believe as Mormons do, but at the end of the day they are worshiping God as they understand him.

Over the past two centuries there has been little formal contact between the Catholic Church and the Church of Jesus Christ of the Latter-day Saints, which is a pity. As Pope Francis observed in his 2013 apostolic exhortation “Evangelii Gaudium” (“The Joy of the Gospel”), “Commitment to ecumenism responds to the prayer of the Lord Jesus that ‘They may all be one.’”

PREVIOUS: Bishop Thomas reflects on his ministry, looks toward new home in Ohio

NEXT: A new neighbor comes to town