A new neighbor comes to town 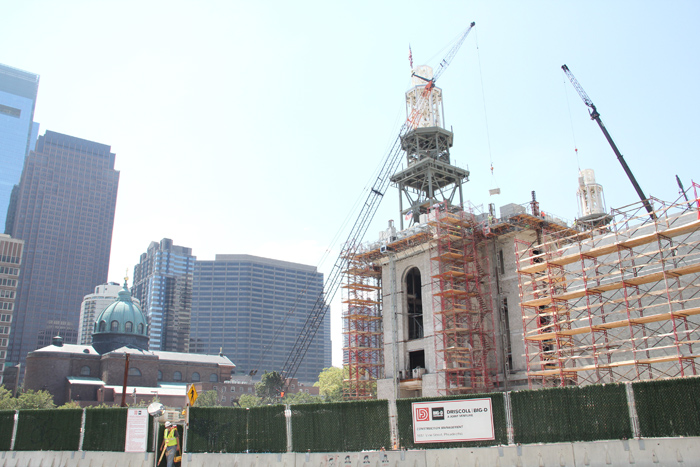 A worker leaves the construction site of the new temple of the Church of Jesus Christ of Latter-day Saints in Philadelphia, across a highway from the Cathedral Basilica of SS. Peter and Paul (background left) and the rest of the center city skyline. (Sarah Webb) 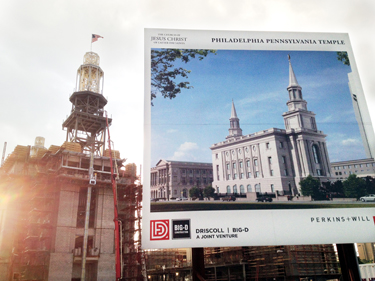 An artistic rendering at the construction site shows the temple at its completion, which is expected next year. (Sarah Webb)

Philadelphia’s venerable Cathedral Basilica of SS. Peter and Paul is about to get a new neighbor. The Philadelphia Pennsylvania Temple for the Church of Jesus Christ of Latter-day Saints (Mormons) is rapidly taking shape almost directly across the street from the cathedral on the north side of the Vine Street Expressway, with completion expected next year.

The two buildings, the principal place of worship in the Philadelphia area for their respective faiths, are strikingly different in architecture. The cathedral, completed in 1864, is Italian Renaissance in style with a large dome that is modeled after the San Carlo del Corso Church in Rome. It faces Logan Square, one of the five original parks designed by William Penn and an area that was relatively unpopulated when construction began in 1846.

A cathedral by Catholic Church law must be within the boundaries of the named city, and when construction began the northern boundary of the City of Philadelphia was Vine Street; it could not have been erected further north.

In fact the adjacent property was then the home of St. Charles Borromeo Seminary, and chosen because it was a relatively quiet area.

At its completion the cathedral was the only imposing building in the immediate vicinity. The Swan Fountain, the Parkway, the Art Museum and the other beautiful public buildings and museums would not come along until the 20th century.

The cathedral itself is a solid masonry building — brick with brownstone facing. The gilded cross that tops the green-patina copper dome brings the total height to 209 feet.

The new temple across the expressway will be granite-faced with concrete construction beneath. Some features will be reminiscent of Philadelphia’s colonial buildings, but with towers surmounted by graceful, coated stainless steel spires.

The larger east spire will be topped by a gilded statue of the Angel Moroni, who by Mormon tradition appeared on various occasions to Joseph Smith, the founder of Mormonism. In a very modern touch the statue will be crafted in fiberglass, a material unknown 150 years ago.

Spires in various quantities grace most Mormon temples, most notably the Salt Lake City Temple where the Church of Jesus Christ of Latter-day Saints is headquartered.

According to the plans posted on the City of Philadelphia website, the height of the temple including the statue is almost 209 feet, same as the cathedral’s height. The temple utilizes modern construction including steel beams and reinforced concrete, other materials that were not available 150 years ago. It sits on top of a larger two story underground parking lot, another modern convenience unheard of when the cathedral was built.

It is not designed for huge worship services. Rather in keeping with Mormon practice, specific rituals will take place in specific areas — for instance baptisms and weddings, two very big ceremonies in Mormon life. With some variation, the average Mormon might only visit a temple a few times in his or her life.

As of now, the nearest temple to Philadelphia is in Washington, D.C.  As was the practice in the ancient Jewish Temple and still in some Muslim mosques, once the building is dedicated, only practicing members of the Church of the Latter-day Saints will be allowed to enter. This holds only for temples, not for other Mormon places of worship, usually called meetinghouses which, like Catholic churches, are open to anyone who wishes to enter.

There is another striking similarity between the cathedral and the temple. In the cathedral the ceiling is 80 feet above the floor. In the temple the four floors will have a combined height of just about 80 feet, not including a balustrade which will enclose a rooftop garden, according to the architect’s plans.

The height of the temple building is influenced by zoning restrictions not to surpass the height of the nearby Free Library and Family Court buildings, both built in the early 20th century when the Benjamin Franklin Parkway was developed, and they were modeled after public buildings bordering the Place de la Concorde in Paris. Eighty feet was a reasonable building height before the advent of elevators.

In addition to the temple, the Church of Jesus Christ of Latter-day Saints also plans to build a nearby meeting house and large apartment tower.

All in all, the Philadelphia Pennsylvania Temple of the Church of the Latter-day Saints will be a nice addition to the Logan Square area.

Welcome to the neighborhood.

PREVIOUS: What is the Church of Jesus Christ of Latter-day Saints?