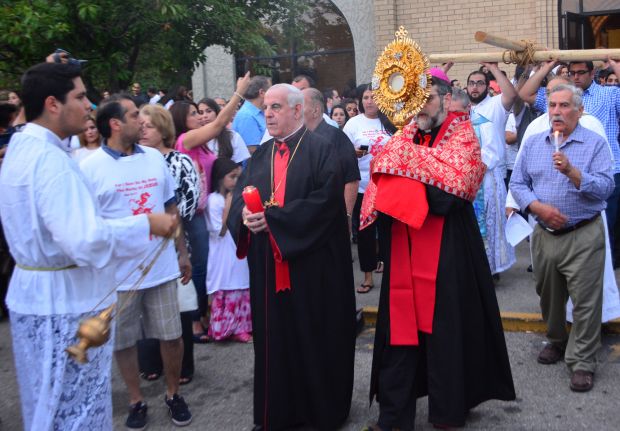 SOUTHFIELD, Mich. (CNS) — Standing in the sanctuary of Mother of God Chaldean Cathedral, flanked by an empty cross and two ominous red symbols, Chaldean Bishop Francis Kalabat led more than 1,000 people Aug. 1 in an earnest prayer for peace and a plea for help.

The bright red symbols were the Arabic letter that stands for “Nassara” or “Nazarene” — meaning Christian, and they were ominous because Islamic militants have used the symbol to identify some 200,000 Iraqis singled out for an ultimatum: Convert to Islam, pay a tax or be killed.

Painted on the targets’ houses, the symbol is intended by the militants to be a derogatory term. But Bishop Kalabat said he wears it with honor.

“This is the latest image today of what has been endured for us as the cross,” he said, pointing to the wooden crucifix behind him. “This is just a new manifestation. A new way of attacking us, a new way of persecuting us.”

Bishop Kalabat, who in June was ordained the second bishop of the Southfield-based Chaldean Eparchy of St. Thomas the Apostle, urged those in attendance to keep their focus on Jesus, and to unite their sufferings with him.

“That’s the suffering that we Christians have endured for 2,000 years, and will continue to endure until the end of time,” he said. “We Christians will be persecuted and crucified. Why? Because our beloved Jesus, the one we are anointed in, was crucified.”

The prayer vigil at Mother of God Cathedral followed a rally and march earlier in the day in downtown Detroit, which was attended by about 150 mostly young Chaldean Christians. After the prayer vigil at the cathedral, Bishop Kalabat led a eucharistic procession and rosary outside the church.

In a powerful address to the overflowing congregation, which included several local media outlets, Bishop Kalabat acknowledged the difficulty in forgiving those who unjustly persecute and kill Christians in the Middle East and elsewhere.

“I know I cannot forgive these people who keep hurting us,” he said. “But I know what Jesus said on the cross: ‘Father, forgive them, for they do not know what they have done.’ And I know that he can give me that grace, but we need to ask.”

But the bishop said forgiveness does not mean Christians should not also pray and ask for justice, including from elected leaders. He called on the United Nations and international community to condemn the violence as genocide and said humanitarian aid was badly needed for Iraqi refugees, many of whom have found temporary protection from the Kurdish army after fleeing their homes in northern and central Iraqi cities such as Mosul.

Bishop Kalabat had especially pointed words for President Barack Obama, whom he said has not done much to address the problem.

“I don’t understand President Obama’s words, ‘The situation is an Iraqi problem.’ Since when? How many thousands of American soldiers were sacrificed? Bloodied, lost limbs, lost their souls, lost their lives. How is this not an American problem?” Bishop Kalabat said.

He said the inaction by the White House has prompted the Chaldean community to pursue direct humanitarian aid instead, including via bills currently before Congress.

“This community, you have responded in the most beautiful way,” he said, referring to a $60,000 collection taken up by local Chaldean parishioners about a month ago. “It was a drop in the bucket (compared to what’s needed), but it did help.”

He thanked the senators and representatives who traveled to Iraq to visit with refugees, especially from Michigan and San Diego, where the two largest concentrations of Chaldeans exist in the United States.

The bishop said advocacy groups were in the works, and a website will be created at www.HelpIraq.net to keep the community informed about ways to help, donate and get involved.

“We’re trying to bring the community together to be one voice. Not different organizations doing different things, but one voice, one community, one action,” he said.