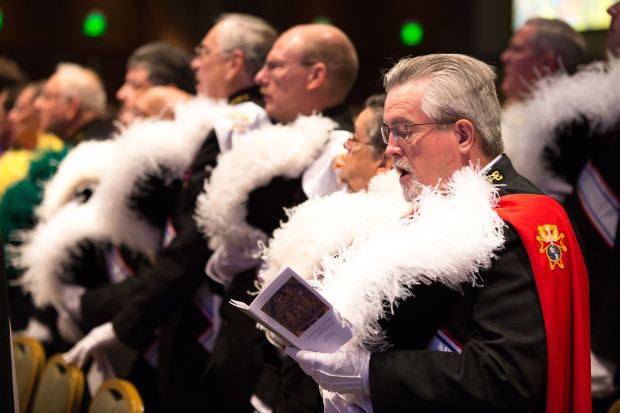 Knights sing during the Aug. 5 opening Mass of the 132nd Supreme Convention of the Knights of Columbus in Orlando, Fla. (CNS photo/Tom Tracy)

ORLANDO, Fla. (CNS) — Setting the tone for the 132nd annual Supreme Convention of the Knights of Columbus, Orlando Bishop John. G. Noonan noted shifting social trends and the turbulence of world events but also emphasized the hope of faith and fraternity among Christians.

Nearly 90 archbishops and bishops — including 11 cardinals — were expected to join approximately 2,000 Knights and their family members for the Aug. 5-7 convention in Orlando. The event represents the largest annual gathering of the nation’s Catholic bishops outside of the annual meetings of the U.S. Conference of Catholic Bishops. 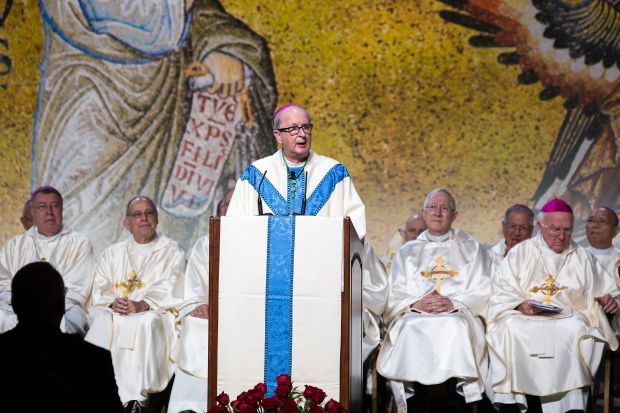 Bishop John G. Noonan of Orlando, Fla., delivers the homily during the Aug. 5 opening Mass of the 132nd Supreme Convention of the Knights of Columbus in Orlando Aug. 5. (CNS photo/Tom Tracy)

On the anniversary of the founding of Rome’s Basilica of St. Mary Major, Bishop Noonan noted the difficulty of the times, of political gridlock and apparent social and moral decay, challenges to marriage and family life, dwindling belief in God and challenges in the church.

“The challenges we are facing are whether we are willing to recognize God in our lives and are we willing to have a relationship with him,” the Irish-born Bishop Noonan said in his homily.

“Along comes a man named Jorge Mario Bergoglio who becomes Pope Frances. He captures the world with his humility and simplicity. Riding on the bus with other cardinals after his election; paying his hotel bill; riding around in a Ford Focus,” he continued. “For those of you who have a Ford Focus, feel honored you have a popemobile.”

In his first message to the world, Pope Francis “is telling us not to view the world with fear but with the joy of the Gospel,” Bishop Noonan said. “Pope Francis challenges us to let God into our lives. He illustrates this by telling us that the moon has no lights, but we have to be like the moon, because the moon reflects the light of the sun just as we must reflect the love of Christ in our lives.

The pope reminds Catholics that fear will always be interwoven with their hopes, Bishop Noonan said. “We need to discern not only our hopes but also our fear, that our fears will not overcome our hopes and leave us in doubt. The joy of the Gospel is a gift of the Holy Spirit; it is in our relationship with Christ that we overcome all fears and doubts.”

This year’s convention, with the theme “You Will All be Brothers: Our Vocation to Fraternity,” was to include a mix of business, fellowship, prayer and recognition of Knights who have distinguished themselves over the past year.

The theme comes from Pope Francis’ message for World Day of Peace, in which he observed: “Without fraternity it is impossible to build a just society.” Catholics, he said, share “a vocation to fraternity.”

Later in the day, at the start of the convention business meeting, the Vatican secretary of state, Cardinal Pietro Parolin, conveyed a papal message.

He said Pope Francis sent warm greetings to all those in attendance and assured them of his closeness to them in prayer.

“The church is called to be a community of brothers and sisters who accept and care for one another and serve as a leaven of reconciliation and unity for the whole human family,” the cardinal said in his statement. “In the complex social and ecclesial situation of late 19th-century America, this vocation found particular expression in principles of faith, fraternity and service which guided the establishment of the Knights of Columbus.” 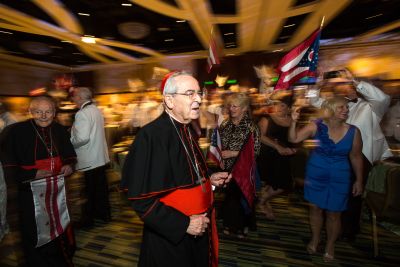 He added: “The fidelity of the Knights to high ideals has not only ensured the continued vitality of your order, but has also contributed, and continues to contribute, to the mission of the church at every level and, in particular, to the universal ministry of the Apostolic See. For this, His Holiness is profoundly grateful.”

The Knights of Columbus, with about 1.8 million members in the United States, Canada and elsewhere, as an organization has actively supported the U.S. bishops’ campaigns to strengthen traditional marriage, defend the traditional definition of marriage and defend religious freedom. The organization also have publicly opposed Obama administration’s contraceptive mandate requiring most Catholic employers to include contraception in the health insurance plans they offer employees.

During the past year, Knights donated more than $170 million and more than 70 million hours of service to charitable causes. In addition to the delivery of the annual report by the supreme knight, a keynote address will be delivered today by Cardinal Gerald Cyprien Lacroix of Quebec.

More than 500 delegates were to participate in the business sessions Aug. 6 and 7, with various service and achievement awards to be presented Aug. 6.

“Florida is a fitting place for us to remember the great Catholic contribution to our hemisphere,” said Supreme Knight Carl Anderson in a statement about the convention.

“Before the colonies of Jamestown and Plymouth, the first permanent European settlement was here in Florida, and it was Catholic. The legacy of charity and evangelization left by the early Catholic missionaries continues to bear fruit today in our own work for those in spiritual or temporal need.”

NEXT: Pope’s Korea trip seen as chance to for Catholics to renew their faith