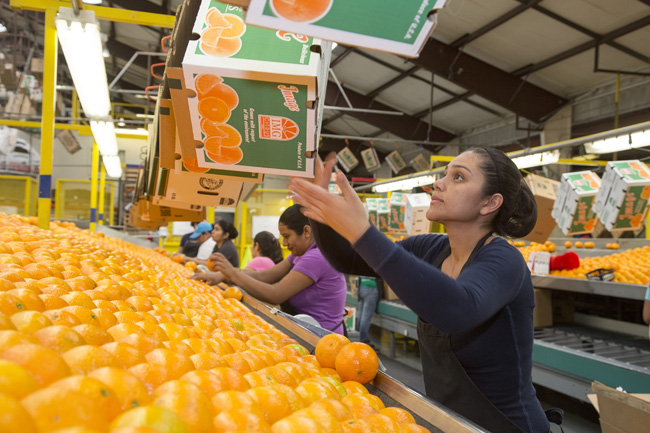 Oranges are sorted and packed by a worker at the IMG Citrus packinghouse in Vero Beach, Fla. Labor Day, honoring U.S. workers, is observed Sept. 1 this year. (CNS photo/Jim West)

WASHINGTON (CNS) — In their 2014 Labor Day statement, the U.S. bishops denounced the fact young adults have “borne the brunt” of unemployment and underemployment in this country and around the world.

“Our younger generations are counting on us to leave them a world better than the one we inherited,” wrote Miami Archbishop Thomas G. Wenski, chairman of the U.S. bishops’ Committee on Domestic Justice and Human Development.

Writing the statement on behalf of the bishops for Labor Day, which is Sept. 1, the archbishop spoke of Pope Francis’ teaching against an “economy of exclusion” and applied it to the millions of unemployed young adults in the United States.

(See the full statement in English and in Spanish.)

Some Americans, he said, have found “stability and security” in an economy that has seen some improvements. There are signs the country “may finally be healing economically after years of suffering and pain.”

“For those men and women, and their children, this is good news,” he said, but a little digging shows there is an “enduring hardship for millions of workers and their families.” And the poverty rate remains high, he said, with 46 million Americans struggling “to make ends meet.”

“For those fortunate enough to have jobs, many pay poorly. Greater numbers of debt-strapped college graduates move back in with their parents, while high school graduates and others may have less debt but very few decent job opportunities,” he wrote.

“Pope Francis has reserved some of his strongest language for speaking about young adult unemployment, calling it ‘evil,’ an ‘atrocity,’ and emblematic of the ‘throwaway culture,'” Archbishop Wenski said in the statement.

He also pointed out that the pope has called young people a source of hope for humanity. “We need to do more to nurture this hopefulness and provide our young adults with skills, support and opportunities to flourish,” he said.

The archbishop called for greater solidarity, noting that “each of us is made in the image of God and bound by his love, possessing a profound human dignity; we have an obligation to love and honor that dignity in one another, and especially in our work.”

“Our challenge this Labor Day is to rise to the challenge of solidarity posed by Jesus when he commanded, ‘Love one another. As I have loved you, so you also should love one another,'” he said.

“What would our communities, parishes, and country look like if we all recommitted to each other and the common good?” he asked. “If, instead of lamenting the dwindling hopes of our young people, we create institutions, relationships, and an economy that nurture human flourishing? If, instead of bickering about ideologies, people acknowledged the human dignity of others and worked together?”

He praised labor unions for advancing the common good by helping workers.

“Yes, unions and worker associations are imperfect, as are all human institutions,” he said. “But the right of workers to freely associate is supported by church teaching in order to protect workers and move them — especially younger ones, through mentoring and apprenticeships — into decent jobs with just wages.”

Archbishop Wenski also made a plea for fixing “our broken immigration system to stop the exploitation and marginalization of millions of people as well as address the development needs of other countries.”

In this nation of immigrants, “a vibrant and just economy” needs everybody’s contribution, he said.

“Those who come seeking decent work to support their families by and large complement, rather than displace, American workers,” he added.

NEXT: Cardinal pleas for solidarity with Iraq’s Christians after CUA Mass